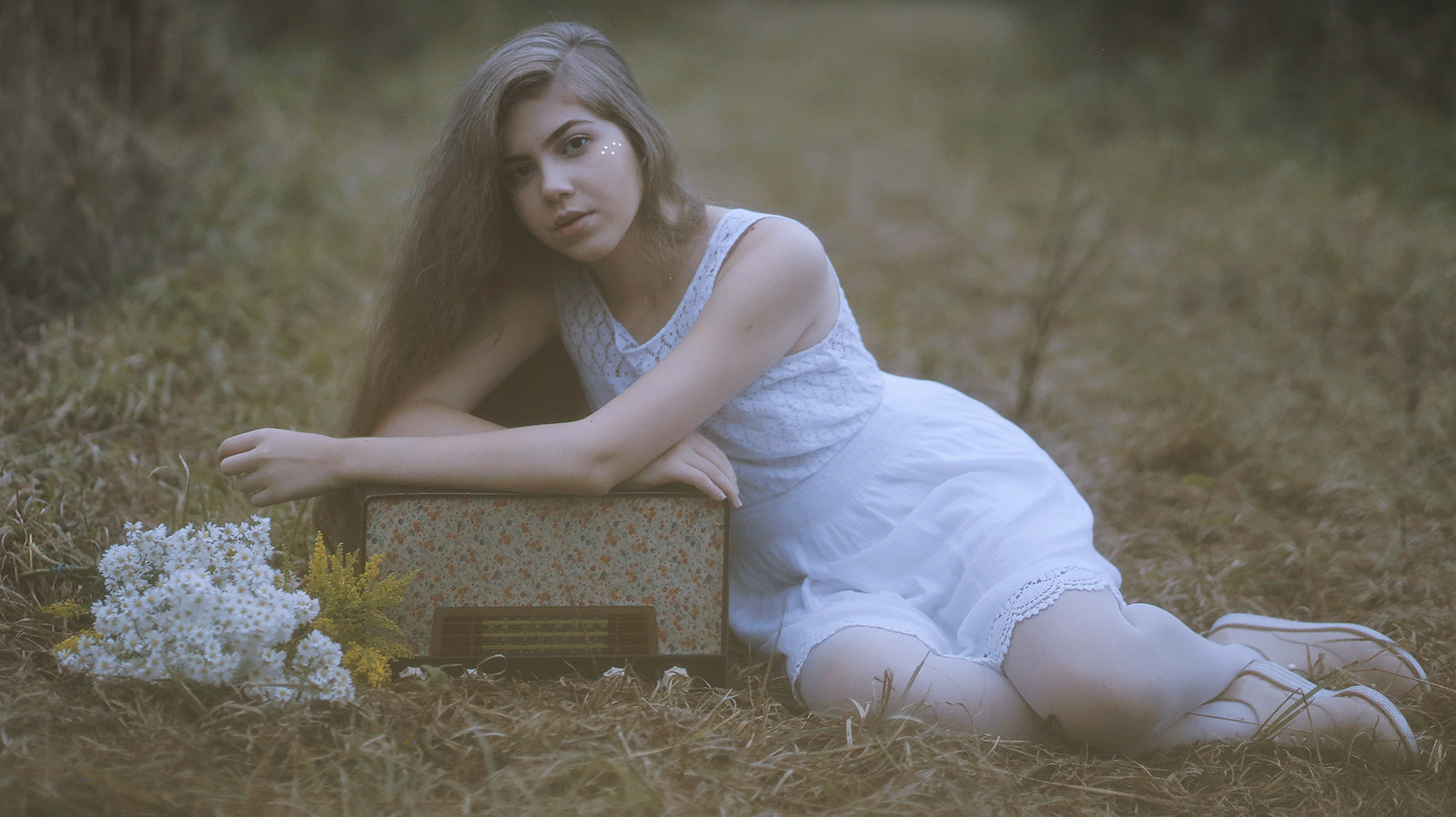 “Dig it all up, then. Come on, let us see it” Chloe’s stepfather, Mark, breathed on to her neck.

She was on her knees, in the backyard, the hot, distinctly Australian sun beating down on her head endlessly, heedlessly.

“I’m trying” she snapped at him.

Her hands were sticky with sweat and dirt. She wiped them on the front of baby blue skirt as she squinted at the ground, looking for anything.

Chloe didn’t expect to find much. Her grandmother had been eccentric, strange. She got into these moods, periods of time when she would go mad. She would run around the house, saying things like, “I’m a relic, Chloe, I’m a goddamn relic. Ancient fucking history!”

She spat as she talked, and spat after everything she said. But only when she was in one of her moods. Afterwards, she was a completely normal grandmother; she even gave Chloe Timtams. Chloe never ate them – they had palm oil in them.

Her grandmother had been in one of her moods the day she died. That was when she buried her relic. It was a chest, wooden and carved with some indistinct pattern. Flowers, maybe. Leaves. Chloe couldn’t remember now. She only remembered the burial. Her grandmother crouched in the dirt, like Chloe was now, digging with her hands (until Chloe gently handed her a shovel), crying madly about her relic, her relic, she was the relic, the relic was in her, the relic was her, but she couldn’t just bury herself, the relic, the relic, she was the relic.

That afternoon, after Chloe’s mother, Julianne, returned from work, Chloe’s grandmother had a heart attack. Followed by an aneurysm. They tried to get her to the hospital, but it was all so quick. One moment there, she was sitting in her favourite armchair, roses in her cheeks, and the next she was nothing but a lump of flesh, baking in the December heat.

It was Chloe who found the body. She didn’t cry, not at first. Not at the funeral. But later, quietly. Her grief was a secret, only for her and her grandmother. No one else deserved to see it.

She hadn’t bothered to tell Julianne or her stepfather about the buried relic until February, two full months later. That was when Mark demanded to see the relic.

“But it’s buried” Chloe had said.

“So dig it up!” Mark laughed, as if Chloe was stupid.

She really didn’t know what her mother saw in Mark.

“I need a shovel” Chloe said.

Julianne was in the kitchen, looking out at them through the window, clutching a necklace Chloe’s grandmother had bought her. Or maybe Julianne bought it herself. Chloe couldn’t remember, and she was so angry that she couldn’t remember. She wanted to remember every detail of her grandmother’s face, every word she ever spoke, even the mad ones, the crazed ones, the ones that stung, the ones laced with poison (arsenic, perhaps). Julianne’s forehead was slick with sweat, a sign she was anxious. Why was she anxious?

Julianne hadn’t cried at the funeral either. Maybe silent grief was a genetic thing.

Mark came back, with the shovel. Chloe hadn’t even noticed him leaving, but there he was, crossing the dry grass, the black, foldable shovel in hand. He was wearing a checked shirt, a relic itself, borrowed twenty years ago, when he was in university, from some dodgy, weed-smoking housemate.

He sat on the grass next to Chloe, and she stood, grabbing the shovel from his big, rough hands. The handle was moist and hot. Chloe started digging. Mark smiled. He probably thought money was the relic. It wasn’t that, Chloe knew.

Her grandmother had dug far, deep in the earth, making a hole like the smaller craters of the moon, a hole to match her wrinkled dimples. The piles of earth had grown in the backyard, piling higher and higher, skyscrapers of dirt and dust. Then they had fallen as her grandmother covered the hole, buried the treasure (whatever it was). The city of dirt had fallen.

Chloe dug holes that day too. Small, at first. Just big enough to block it all out; the death, the memories, the relic, she who was the relic. Then bigger, deeper. She dug deeper holes and buried her heart.

She hit something hard. Mark jumped up, but it was only a rock.

“False alarm” Chloe said, and Mark sighed and sat down.

Mark adjusted the blue cap sitting on his head and scratched his balls. Chloe stopped digging for a moment, wiping her brow.

“Why do you care so much?” Chloe heaved.

Mark itched the back of his neck. “I’m curious, is all”

“Hey” Julianne said to her daughter, “You got Mark to do it”

Her mother bent down and kissed her cheek. She smelt like almonds and musky sandalwood. Like mothers should smell (Chloe’s grandmother had smelt the same).

Chloe didn’t know what she was talking about, but a flood of relief swept through her.

They watched Mark dig together, his muscles clenching and unclenching as he burrowed into the earth, going achingly slowly.

The kitchen window was dirty, full of dust and muck. Practically translucent. Chloe had the sudden urge to clean it. Sponge off all the grime, leave it pristine, chase every spiderweb. She stayed still. The window could be cleaned later.

Her mother’s arms were around her, loped over her shoulders. At sixteen, she was barely smaller than Julianne anymore. She remember looking up at her mother and wondering could be that tall. Everything seemed gigantic back then. She couldn’t climb atop chairs, they were so big. She lived amongst shoes and knees. She missed that feeling, the feeling of being small.

“Jeez” Julianne asked, “How big is that hole?”

“Pretty big” Chloe said, “She was in one of her moods”

Chloe felt her mother’s chest rise with the weight of her wet breath.

Mark took his cap off, revealing a balding head of thin black hair. He dropped the shovel.

Julianne rushed out into the back garden immediately, awkwardly strutting in her tiny heels, still dressed in her work clothes.

“Why did you stop?” she asked Mark.

He turned his head up.

“Tired, is all” Mark said, talking to the too-bright, too-blue sky.

The hole was deep enough to fall into, but not wide enough. Julianne bit her lip and picked up the shovel.

It only took a few heapings of dirt.

Together, they bent down and peered into the hole.

They dragged it out. The carvings on the box were leaves, and flowers.

“We should take it inside” Julianne said.

Julianne carried it, dumped it on the kitchen table, spilling little, dark bits of earth all over the table, and the floor.

She turned to her daughter. “Ready?”

Chloe nodded. The box was opened, and inside it – nothing. An abyss of empty space, an ocean of nothingness, an all-consuming void. The only undiscovered thing Chloe’s grandmother had left behind.

Mark was still staring at the sky.

Zadie Mccracken is a writer, performer and creative producer. Most of her work explores social life and cultural performativity. In addition to her practice, Zadie likes to-do lists, personality tests, glitter and television. You can find her all over the internet, but especially at her website and her Instagram, @zadiemccracken.

Del Santana is a photographer from Brazil who likes creating stories and making them real with her camera. Follow Del on her blog, Instagram, and website.