Jenny Williams is a painter and illustrator. Her blog, What My Daughter Wore, was named one of the 25 Best Blogs of 2013 by Time, and has attracted a loyal and enthusiastic following. Her work has appeared in The New Yorker, New York, Rolling Stone, and The Source. She has been profiled in numerous art/fashion publications, including Spanish Vogue, Vogue.com,  Refinery 29, and die Zeit. She works and lives in Brooklyn with her husband and three children.

Posts contributed to by Jenny Williams 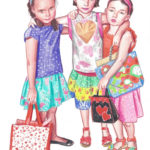