Solange Avena is an Argentinian photographer raised in a matriarchal family, which has set her interest in women as the main characters on her photography. She studied in Escuela de fotografía Motivarte and attended several workshops regarding film direction, arts and performance. She participated in the collective photographic exhibition of domestic violence at the Museo de las Mujeres in Costa Rica, 2012. Festival de Fotografía Nano, a tribute to Grete Ster and Garry Winogrand (2014-2016) She exhibited her documental proyect “SOBRE-VIVENCIAS” about Marie Curie Oncological Hospital’s patients, 2016. Her work has been published in Kwerfeldein Magazine Alemania, LAAAO Magazine Colombia, Trattoria della Poesía Editorial Italia, among others.

Posts contributed to by Solange Avena 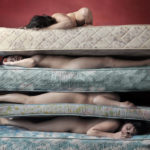 Writing by Claire Wastell // Photograph by Sol Avena // The stigma that comes with the term anorexia had held back my recovery for years. I didn’t want people to talk about me and think of all the loaded connotations that come with the label anorexia.