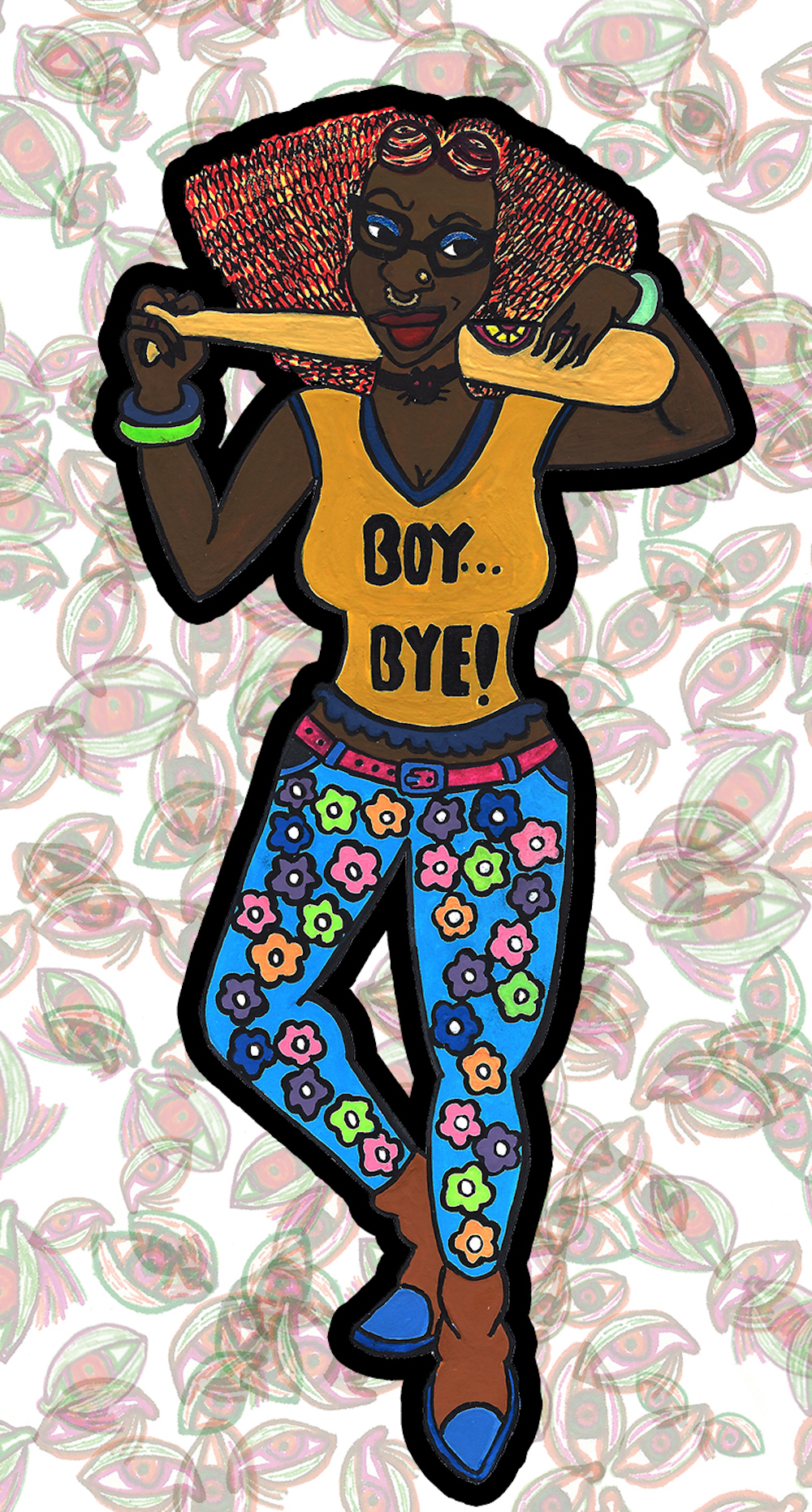 I don’t like it when men stare at me.

I’m not talking about the subtle little glances everyone gives everyone. I approve of people-watching but there is a way to look at humans (and their butts) that is non-invasive and these guys ain’t doing that. They stare me up and down, carefully cataloguing my tits, my arse, my face, my legs as they try to answer that all-important question; would I fuck her?

Every girl knows what it feels like to have men’s eyes scraaaaape over them like a knife on dry toast. You become hyper aware of your jiggling parts, your exposed skin, the “fuckability” you might be accidentally transmitting. You freeze your facial expression and do your best to act like you don’t know the guy’s looking. You hope to Christ they won’t say or do anything.

You could say I’m being paranoid or that this is a misunderstanding and these creepy guys don’t know they’re being creepy but here’s the thing; these princes among men NEVER STARE AT US LIKE THAT WHEN WE’RE WITH A GUY.

I have done experiments where I walk past certain men alone and they ogle my jugs like it ain’t even a thing and pretend to avert their eyes when I’m walking with my boyfriend.

Because that’s the real issue here. Men and whether they’re cloaking us in the protection of their XY chromosome.

Creepy starers’ don’t give a flying fuck how their eye-banging makes WOMEN feel because women are THERE to be looked at DUH. That’s why they make the calendars with the boobs. That’s why Hooters and Grid Girls and cheerleaders exist. That’s why they sell beer and shorts and cars and EVERYTHING with the smooth jiggly goodness that is the (thin, usually white, conventionally attractive) female form. Men look at women. Women are looked at. It’s the way things are and to paraphrase Bernard Black ‘if things weren’t the way they were, then they wouldn’t be the way they were.’

Except… Well except, there’s this OTHER theory, the one about how men and women are human beings with the same basic needs except men are by and large, bigger and they used this advantage to subjugate women with violence and then put a bunch of political and social systems in place to oppress us emotionally, spiritually, financially and intellectually, just to reaaaally round out the job. This is known by certain sociological experts as ‘being complete buttholes’ and it SUCKS YOU GUYS. WOMEN JUST WANNA GET PAID THE SAME AS DUDES AND NOT BE RAPED AND BEATEN AND MURDERED AND OGLED AT DISGUSTINGLY HIGH RATES FOR BEING WHO WE ARE. IS THAT SO MUCH TO FUCKING ASK???

See, things might be ‘the way they are’ but a lot of girls don’t like things the way they are because the way things are is poo. Case in point; being made to feel uncomfortable anytime we’re in public without a male escort.

Being eyeballed by creepers blows. You feel so powerless. You feel so pathetic. You’re so scared and you have to pretend like you don’t see guys doing it when YOU CLEARLY DO because you’re ALWAYS SCANNING for potential murder/rape threats which, if they eventuate, will ultimately be blamed on your pussy in the mainstream media.

This used to fill me with impotent rage but lately I’ve been trying something else. Whenever I spot a man staring at me, I stare back. I keep staring even if I have to turn my head. I make unflinching eye contact. And do you know what happens? It’s pretty crazy you guys.

I know! I was surprised too! There’s an awkward moment where the guy blinks like a confused owl (is that chick looking at me? Can she actually see me? DOES SHE KNOW I’M WORKING OUT IF I WANT TO CRUSH HER VAG???) then they realize, yes, yes I do know that and they get embarrassed and look away.

I’m not shaming men either (although it IS hilarious when they act all offended like ‘why are you LOOKING at me girlie? Don’t you know that’s RUDE?)’ I’m just treating men the way they’re treating me. No harm, no foul.

And dudes, I know it’s a long shot but next time you catch yourself eye-shagging someone with little to no regard for their feelings imagine how YOU would feel if a physically superior being was blatantly sizing up YOUR ass. You would FREAK THE FREAK OUT and you know it.

So here’s some handy information: WOMEN DO NOT WANT YOU TO GAWP AT US IN THE STREET. Even if we DID, you wouldn’t know it without some next-gen mindreading tech you don’t fucking have so DON’T DO IT. If you want to check us out BE SUBTLE, the way you are when we’re walking with MEN.

Please try and remember, we’re just you in female bodies. Treat us as humans. We are humans. Please just treat us like humans? Until then (could be a while) I will faithfully stare back at you. Yeah you, you bald saggy-ass tradie sitting outside McDonalds. And for the record I wouldn’t fuck you if it was a choice between you and Azathoth the mindless daemon-sultan of the ultimate void of chaos, KTHXBYE.

Eve Dangerfield has loved romance novels since she first started swiping her grandmother’s paperbacks. Now she writes her own sexy tales about complex women and gorgeous-but-slightly-tortured men. Eve currently lives in Northcote with her lovely sister and a rabbit named Billy. When she’s not writing she can usually be found drinking, dancing or making a mess. Check out her website.