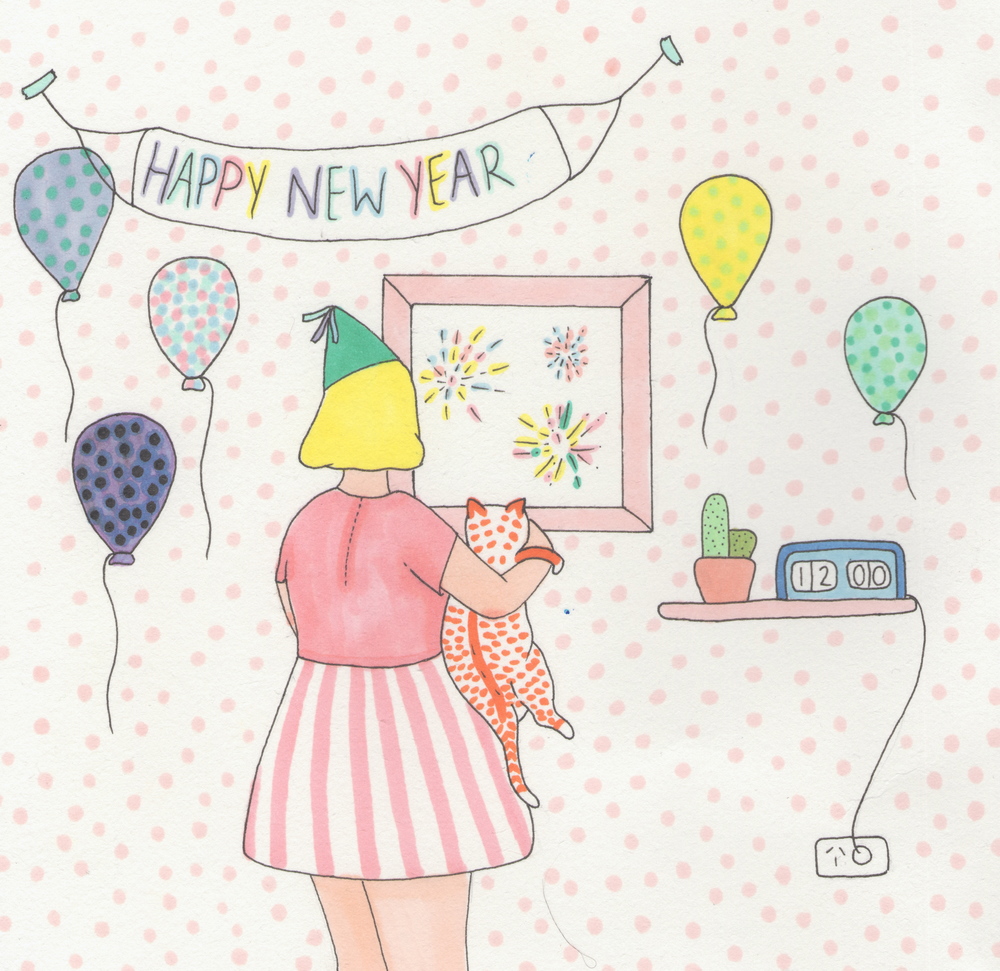 New Years has been my least favorite holiday since I was about 13, when the novelty of staying up past midnight had worn off and New Year’s Eve turned into a high-pressure holiday where I had to find something “cool” and “social” to do with friends instead of watching the festivities in NYC on television with my family. In my experience, there is always tons of hype around New Year’s Eve without much to show for it. There’s nothing fun about excitement and anticipation (that this would be the year for a New Years kiss; the year I would have a revelation about my future as the clock struck 12; the year I’d take amazing, flattering pictures with my friends to share on Facebook the next day…) just to be totally, utterly let down. Woof.

And then there’s the added pressure of evaluating the past year and setting goals for the next one. Unfortunately, creating New Year’s resolutions often becomes a time of self-criticism or a reason to set unhealthy goals. All research strongly suggests that the vast majority of individuals (about 80%) do not keep their resolutions, likely because the goals we set are usually too distant and vague, too numerous, or too unrealistic.

With all this in mind, I’ve spent some time reflecting over the past few New Year’s Eves, and compiled some of my suggestions to make the most out of your New Year’s Eve and your resolutions.

1. Spend some time reflecting on the positive from the past year, and celebrate your accomplishments. Find something you’ve done really well in the past 12 months that you’d like to see continue in the future. For example, maybe you’ve been a lot more patient with your little brother or have read the newspaper at the start of every day. Acknowledge that, and let the continuation of that behavior serve as one of your “resolutions.” This discourages the focus on your failures over the past year, which can be depressing and disappointing.

2. Change the way you frame your goals. Set more reasonable, encouraging goals for your coming year. For example, instead of saying you will go from exercising never to exercising every day, consider how you can frame your goal in more incremental steps. Is your goal around exercising really a goal to be healthier? If so, can you expand you definition of healthy, and consider alternatives for getting there each day? For example, maybe you take the stairs instead of the elevator, watch one less episode on Netflix, eat an apple, take a jog, or read a book before bed instead of staring at your phone, instead of trying to fit an hour-long workout into every day.

3. Start an accomplishment jar. Get a mason jar and keep it somewhere accessible. Each time you do something you’re proud of or excited about in 2015, write it on a piece of paper and stick it in the jar. It could be anything from “finally conquered fear of spiders” to “travelled alone for the first time” to “saw my favorite band perform live.” Then, at the end of next year, you can go through your jar and remember all the awesome and important things of 2015. So even if you find yourself falling into the trap of setting resolutions, failing to meet them, and beating yourself up a year later, you’ll have a buffer from those negative feelings with tangible proof of the great stuff from the past year.

4. Make a list of things you would like to try/do in the next year. Look over your bucket list, or consider starting one if you haven’t. What’s something new you want to add? Is there anything you can cross off from the past year? Is there one thing that you definitely can see happening in 2015? Here are a few things I’m focusing on for 2015: go to Iceland, learn to use a sewing machine, and take a drawing class.

5. Use NYE as a time to ground yourself and take a moment to look at how you want to live your life. For the past two years, I have written up a list on NYE of the many ways I want to live. When I look back on my life in 50 years, there are a number things that I’d like to be able to say with confidence I achieved during my life. Some of them are things I already do. Some of them are very challenging for me. But it’s a nice way to take a look at your priorities. What do you really want out of your life? I look back on the my lists each month as a way to check in with myself and remind myself what really matters to me. And it’s pretty cool to see the slight shifts that occur from one year to another.