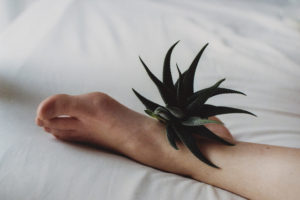 My rich ex-boyfriend called them “grandma worries.” We were sipping scotch I could never afford that was swimming among the hand-carved soapstone scotch rocks.

“Don’t worry,” he said, in an attempt to emulate real human empathy. “I don’t find them that gross.”

I sheepishly slid my hands under my jeans and averted eye contact.

I suffer from Dermatillomania, and have since I can remember.

Dermatillomania is a body-focused repetitive behaviour (BFRB) that can involve picking and biting of the skin, face, cuticles, etc., that often can result in tissue damage and permanent scarring. It’s closely related to Trichotillomania, a compulsion to pull at one’s hair. Dermatillomania is often categorised as an impulse control disorder under the Obsessive Compulsive Disorder spectrum, or can be closely linked to anxiety. It can be a conscious response to anxiety or depression or can be an entirely unconscious habit.

Roughly one in 50 people exhibit at least one BFRB. My vice is picking at the sides of my fingers, mainly my thumbs, until they bleed, scab, and scar. As a result of over ten years of this habit, my hands are permanently scarred and imperfect. Having them so damaged and imperfect is frustrating—it leads to more picking and scratching which only harms them more. It’s a vicious cycle of damaging, correcting, and damaging again.

Earlier this year I was arguing with my partner at a music festival, and began clawing at my legs. As we fought, I pulled and tore at the skin on my calf until blood was seeping into my socks and building up underneath my nails. I didn’t realise what I had done until I woke up the next day, my leg bloodied and bruised, and hobbled to the First Aid tent to be patched up. It throbbed for days on end; the pain so bad a whole week later I wept in my bathroom clutching onto Dettol.

At times of serious distress, I unconsciously claw at my arms and legs until the skin breaks and blood trickles out, leaving ugly red scars. There’s an unexplainable discomfort when a panic attack subsides, yet you are left with physical scars.

I recently stumbled upon a beautiful article on Everyday Feminism, which mentioned some tips that I found immensely helpful in managing my tendencies. They revolve mainly around being kind to and patient with yourself, distracting yourself, and reaching out to people.

While the prospect of wearing fuzzy gloves when the urge to pick or pull happens (which, in my case would be 24/7) seems slightly impractical, interacting with my body in a loving way, such as painting my nails, brushing my hair, and moisturizing, assists in fostering a positive relationship with my body.

I’m learning to be patient with myself—if I get to the end of a workday and see blood trickling from my fingers, I do not become as enraged as I used to. I lovingly treat the scars on my arms with BioOil and forgive myself for the damage.

Most importantly, I remind myself, and others who suffer the same compulsions, that this illness in no way invalidates my being and my ability to accept love.

Scars and all, I am not a failure.

Sara Lorusso is a 21-year-old photographer who lives in Bologna where she creates mainly analogue images that are inspired by her everyday life. She tries to express her love for life, especially the daily things like waking up, brushing her teeth, playing with her cats, and kissing her boyfriend, through photography. Follow her on Facebook.

One response to “Learning to Love Myself with Dermatillomania”