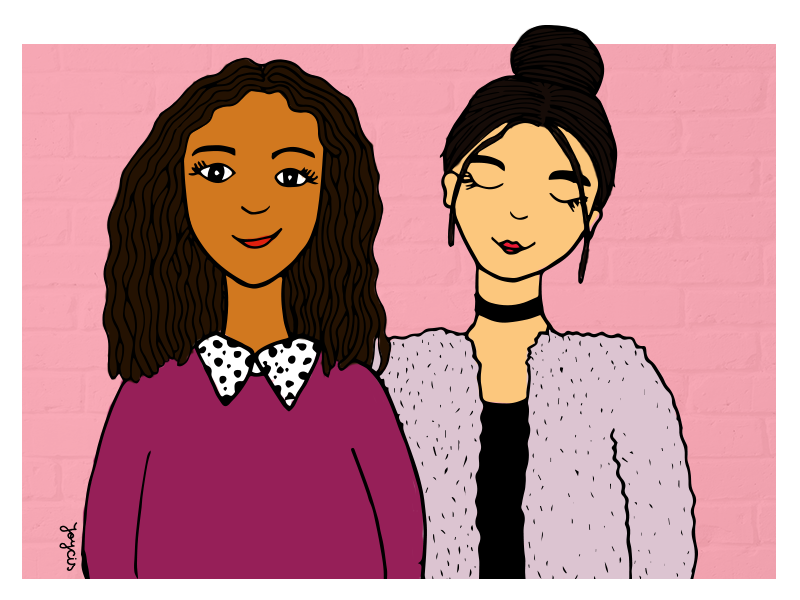 Erandhi: Tell me what you’re working on at the moment!

Sandy: I’m working on my EP – it’s coming together really well. So funny though, the other day I realised that I was the only girl in the room. Everyone else was a straight white male and I’m an ethnic white girl – wait no!

S: Haha, you know what I meant. But yeah, it’s that rift of misunderstanding between gender, race, and culture. You can hear it when someone who doesn’t emotionally understand your music is trying to connect to it with their experiences; which is why it was really important for me to produce this EP myself. The guys that I work with are all so lovely and kind, but it was just hilarious to me how out of place I felt when they were all there to help me make my music.

E: Do you feel like you’re almost not entitled to be there?

S: Yeah! Which is bullshit that I feel that way, but it’s because it’s almost like it has been ingrained in me to always doubt myself. I’m sitting there and I still feel really insecure and I still feel like sometimes I can’t speak up even though I am the reason that everyone is in the room…

E: I know exactly what you mean, I work in an industry that is 80% men

S: And isn’t that so funny because computer science used to be heavily women centric.

E: Yes exactly! The article that I’ve written for Ramona Volume Two is surrounding why there are so few women in tech and why girls don’t study math and science at school. But yeah, it’s so common to walk into a client meeting or even an internal meeting and I’ll be the only girl and the only person of colour. And you’ll notice it, but they won’t.

S: Yeah, nobody else notices it and it’s just… A feeling you can’t shake.

E: It would be so different growing up nowadays, the world is far more progressive. And the music industry generally is so male dominated –

S: – As is like, the entire world, ha ha. Even the stereotypical “female” industries that gender norms perpetuate like beauty or hospitality – it’s still men who excel in those industries!

E: Yeah, it’s like men can do everything but for a women it’s only acceptable or you’ll only succeed in certain industries. And it’s mad because you wonder what has to change not just for us to feel like there isn’t a glass ceiling but for that ceiling to break.

S: In the pop music industry – we are just so much more willing to love and praise boys  and be quick to be cruel to girls. This probably applies for the general real world too…

E: Genuinely though, it is so much easier for people to hate on a girl because the preconceived notion is that we are supposed to be “perfect”

S: We are so accustomed to dislike girls  or prepare to see them fail… It’s all double standards

E: It’s the idea that females are held to a higher standard, it’s such bullshit and it’s backwards.

S: Right, it’s messed up. I always feel like I have to try twice as hard, not just like as a girl but also as someone of colour. And it’s always hard continually watching just the white people succeed. Like we all work as hard as each other.

E: Yeah, you always feel like you have to work twice as hard. And I felt that from such a young age.

S: Agreed, and I’m just so insecure about it. But it’s so normal for us to feel that insecurity? I cry in public all the time, hahaha, and the other day my friends and I were talking and I started crying about something that was probably only understandable based on my cultural upbringing. And I couldn’t articulate it or explain why I was upset because they didn’t understand. I don’t mean that in a blaming way, it’s just simply… They could only ever sympathise not empathise.

E: Yeah I totally understand that.

S: It was just stuff about my parents and it’s hard because my friends were trying to comfort me, and I appreciate that, but without that fundamental understanding of what you’re going through it just…Doesn’t help…

E: I’ve experienced that too, and I know that a lot of my other friends who are brown have felt it also. The other day at work I sat down with two of my brown friends and it was the first time we’d all sort of hung out, and we were talking about relationships and family and it was like we all just understood each other and where we were coming from. It does make a difference.

S: Relationships and family… Literally, the other day my mum was like to me, “oh we’re going to have to marry you off!

S: Whether it was a joke, in the progressive westernised world we live in, people would be like “that’s insane!” Because it is, but like, a lot of kids who grew up with multi-cultures, especially very traditional cultures – it’s still a very real, uncomfortable reality. And it’s hard to mention that kind of stuff to friends who don’t experience that, even if it’s a joke.

E: Totally, like my family is really westernised but we still have traditional values and it’s hard for some people to understand that you can be more than one thing. And bringing people into that is a whole other ballpark. Cultural dislocation everywhere haha my family is so used to western culture, all my cousins and family married or date white people. So when you’re like, hey I’m going to date someone who comes from a more traditional background it’s so screwed up that you have to worry about cultural dislocation in that sense? Everyone wants neat little boxes of we are either westernised or traditional. It’s hard to be both.

S: Yes! Like I know I’m whitewashed but also where do we fit in? Because POC experience racism here in a western country, even though we were born and raised here. But if I go to Taiwan, people there can also tell that I’m not from there.

E: Exactly, you don’t fit in anywhere. I get that when I’m in Sri Lanka. People can tell immediately just by looking at you for a split second.

S: I’ve had this said to me so many times, both in Australia and Taiwan: “are you mixed?” and they mean it as a compliment…

S: It’s hilarious ‘cause like, what am I mixed with hahah? Also just completely fucked because it’s implying that you would be considered more “attractive” if you had some white in you.

S: Yeah, like be a little exotic but not too exotic.

E: Hahaha that’s exactly what it is. You see all of those photoshopped photos of Rihanna with blue eyes and people fawn over it. It’s messed up.

E: Yes, and it is so perpetuated through the media and pop culture. The more representation the better because we feel so restricted by cultural norms. Which takes us back to the pop industry, like I had a bloody field day when I saw that there is a Asian female musician in the new band DNCE. Like her existence and exposure changes lives and how young Asian girls think about what is possible.

S: Yes! I freaked out when I saw her! I didn’t grow up with much representation in mainstream western media at all.

E: Yeah you really only see them in K-pop or J-pop.

S: Exactly, so I guess I took on a bit of responsibility and kind of thought, hey maybe if I worked hard enough I could be that for someone else. Because growing up I mean, I looked up to Taylor Swift –

S: Exactly! And even back then it was still revolutionary to see a young girl expressing herself like that.

E: Agreed, that was exactly why I fell in love with her too. She turned a perceived weakness of girls being vulnerable and having feelings – into a strength.

S: Yes! Nowadays I feel like if I bring up the fact that people who are successful doing that are only white or male, I feel like I’m being petty or annoying people.

E: Hahaha that is my life “Erandhi is bringing up the feminist card again”

S: And it sucks because it needs to be talked about. My own mother has said to my face that I shouldn’t try to pursue a career the music industry purely because I’m Asian, and she’s never seen a young Asian female musician in the mainstream that she’s been exposed to, and therefore I won’t be successful – because that’s just not what I’m “supposed” to or expected to do or be. And those are problematic stereotypes that mainstream society has ingrained into her, and lots of people’s perception, of ‘what kind of person is allowed to be a successful musician’ – And it’s super damaging.

E: Which is crazy because it means that what she sees affects her perception and subsequently yours.

S: Yeah, but I’m a Sagittarius so I’m like fuck that, watch me.

Sandy Hsu is a nineteen year old singer-songwriter / artist / musician / creative human from Melbourne, Australia. She is currently studying contemporary music interactive composition at the Victorian College of the Arts. Visit Sandy’s Bandcamp and follow her on twitter (@SandyHsu_) and Instagram (@sandyshoe)