Writing by Olivia Ferrucci // Photograph by Sandra Lazzarini // By coming to understand the nuanced relationship between our bodies and the companies that dominate the modern world, our society can ultimately combat the detriments proven to occur. The female body does not exist for exploitative purposes; it is time we stop treating it as such. 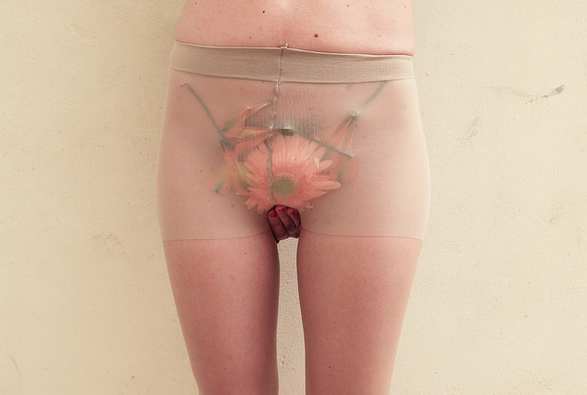 The female body has become more than it set out to be. Between flushed lungs and thriving organs, between creased skin and calloused fingers, there is life in its entirety. But today, it is more than that. The body is no longer a physical representation of life; rather, it is a measure of worth and flaw. Those lacking flat stomachs and cellulite-free legs are victims of the system, allowing for the rises in eating disorders and obesity that have already occurred. Our society has come to seek and prioritize an array of idealized body standards, and it is these notions that are so frequently capitalized upon in mainstream economics.

It makes sense that mainstream companies and publications would want to capitalize on our insecurities. Since when have weaknesses not translated to open wallets in the corporate eye? With an overwhelming 80% of women feeling discontent with their bodies and 75% subscribing to disordered eating, it’s clear that female insecurity is a prominent target of the brands that supposedly work so hard to support and uplift women and femmes. So when the infamous Urban Outfitters released a shirt reading “Eat Less,” I wasn’t surprised. When Seventeen Magazine chose to continue Photoshopping their models after a reader petition received 60,000 signatures, I wasn’t shocked. At the end of the day, brands will generally decide to take the safe route and proceed in their ways.

Besides, it’s all that much easier with the sheer dominance of social media. According to a 2016 study, there is a distinct correlation between social networks and body image. I challenge you to scroll through your Instagram feed and wait. How long does it take you to come across an aesthetically friendly diet pill? A tummy-flattening tea? A comment reading along the lines of “body goals?” We fall prey to our insecurities because there is so much to fall prey to. And while this isn’t an episode of Black Mirror, it feels as though we are living in some warped reality in which every individual is expected to conform to the standards we continuously uphold.

With all of that being said, there is a fundamental reason to believe advertising may soon change. Aerie has catalyzed a sort of anti-Photoshop movement with its aerie Real campaign, designed to solely utilize unretouched photos for advertisement. On their social media, body positive images of women with cellulite, rolls, and other perceived “imperfections” are prevalent. These marketing changes resulted in a 20 percent sales increase in 2015, which leads to the ultimate question: is such body positive advertising entirely innocent? Known as “femvertising,” many corporations choose to feature promotions designed to support and cater to their female audience. Take Dove, for example. When the toiletries company released a minute-long video in 2006 displaying the transformation of one model via makeup, styling, and Photoshop, they received unexpected backlash. And it makes sense– why wouldn’t Dove simply work on creating more feminist-related products, rather than continuing to subscribe to the idea that women must look and behave in certain ways? No one’s put it better than University of Edinburgh professor Nichole Fernández: “the connection between female empowerment and what they actually sell is weak. Which makes it feel insincere . . . Don’t try to just apply feminist concepts as an afterthought in hopes of increasing consumer sales.” Though improvements in female-targeted marketing may occur in the future, it is crucial that such modifications come from a place of genuine intent to empower women and femmes.

Overall, there’s no doubt that the financial consumption of the female body is becoming increasingly apparent. How we choose to respond, however, is of the utmost importance. By coming to understand the nuanced relationship between our bodies and the companies that dominate the modern world, our society can ultimately combat the detriments proven to occur. The female body does not exist for exploitative purposes; it is time we stop treating it as such.