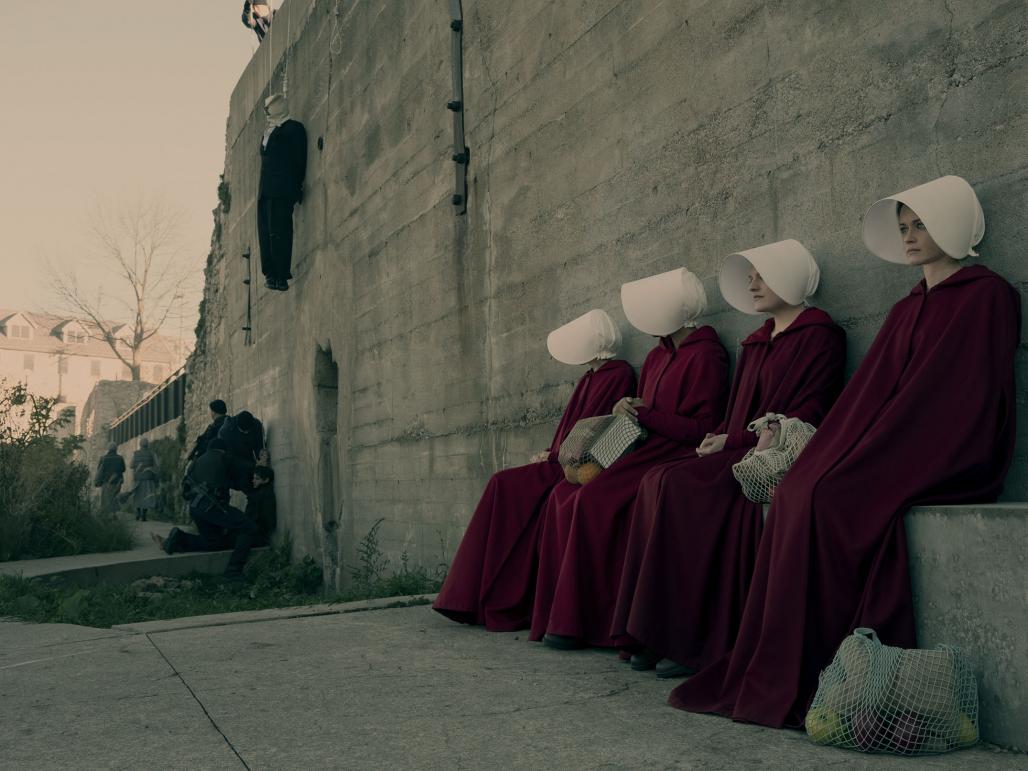 Like many other people, I have been transfixed and rather disturbed by the new dystopian drama series based on Margaret Atwood’s book, The Handmaid’s Tale.

The series is set in the authoritarian theocracy of Gilead, in what used to be the United States. In Gilead, the laws are based on the most conservative and brutal form of Christianity, where punishments include amputation of limbs, execution or forced labour in ‘The Colonies.’ The main character is Offred (real name June) who is being used as breeding stock, as she is one of the few fertile women remaining. Because the story is set in the future, the world is environmentally ruined, and it’s rare for a pregnancy to be healthy due to all the pollutants and radioactivity in the earth and atmosphere.

The main thing that makes the story so disturbing is that women are basically seen as property of the state. They are not allowed to read, listen to music, or watch television. They have to be compliant and submissive. And if you are a Handmaid, you are sexually assaulted on a monthly basis in a bizarre ‘ceremony,’ with the expectation you will become pregnant. If a Handmaid does give birth, her baby is taken from her, and given to the infertile couple enslaving her.

And even though the story is labeled as sci-fi and dystopian, and we are far removed from Gilead itself, the situation still evolves from a setting similar to ours. Before Gilead, June’s life was completely normal, in a normal city, in a normal country. And then when things started to change, she and other women didn’t realize their fate until it was too late to escape, like a frog in gradually boiling water.

And when we look at the world around us at the moment, it’s possible to draw some similarities with the state of women’s rights in Gilead. Many people have suggested that this TV series has some relevance to certain things happening across the world, particularly in America. The restriction on abortion rights in the United States for example. And the creepy way in which Mike Pence has been talking about a ‘culture of life’ in America, suggesting that women are just walking uteri. Even the Trump administration’s recent actions, such as firing James Comey to stunt investigations into alleged election interference, seem authoritarian and paranoid, two hallmarks of the Gilead regime.

But of course the biggest correlation is definitely the restriction of abortion access. When anti-abortion Republican politicians say things like ‘Along with you, we will not grow weary, we will not rest until we restore a culture of life in America for ourselves and our posterity,’ they evoke the ‘Aunts’ in the Handmaid’s Tale. The grim, eerily patronizing women, cloaked in brown, who enforce strict biblical dogma on the women, who have been essentially abducted and held against their will.

One of the latest scandals in the abortion debate has been the appearance of so- called ‘pregnancy crisis centers,’ which are often set up by churches. These places often advertise themselves as abortion providers, but when women go there to seek non-biased advice, they often find themselves instead being talked out of searching for an abortion. In secret footage of consultations at these centers, women are told misleading information about abortion, including that it’s a dangerous procedure, when it’s in fact safer than childbirth. Women also get told that abortions can cause various cancers and serious mental illness, claims that are false. The way the women are spoken to here feels wrong as well, as the ‘consultants’ seem to insist that their lives would feel miserable and hopeless if they had an abortion, just like the ‘Aunts’ in the Handmaid’s tale insist that the enslaved women have some sort of divine duty to carry out by being forced to bear children. And if a woman is not allowed to access safe, legal abortion if she wants to, she is being forced to bear children against her will.

Having said all that, The Handmaid’s Tale, despite its harrowing and hair-raising content, is quite valuable in the sense that it poses as a warning to what sort of things could happen in a world where dangerous and repressive ideas are allowed to spread. I think it, along with the policies we’ve been seeing in the United States, is a wake up call to feminists, activists, and reproductive healthcare workers and organizations to keep fighting for women’s freedom of choice.

Astrid is a 16-year-old Melbournian who one day hopes to be a diplomat and travel the world but for now she is stuck at high school and otherwise passes the time by reading, cooking and expressing her feminist rage.

One response to “We Aren’t Living in the Republic of Gilead ….. yet”