Writing by Eva Marchingo // Illustration by Karla Drama // What exactly made us all believe women don’t poo, and how far back does it go? From my research the point where it starts to become gendered is around the late 1800s. 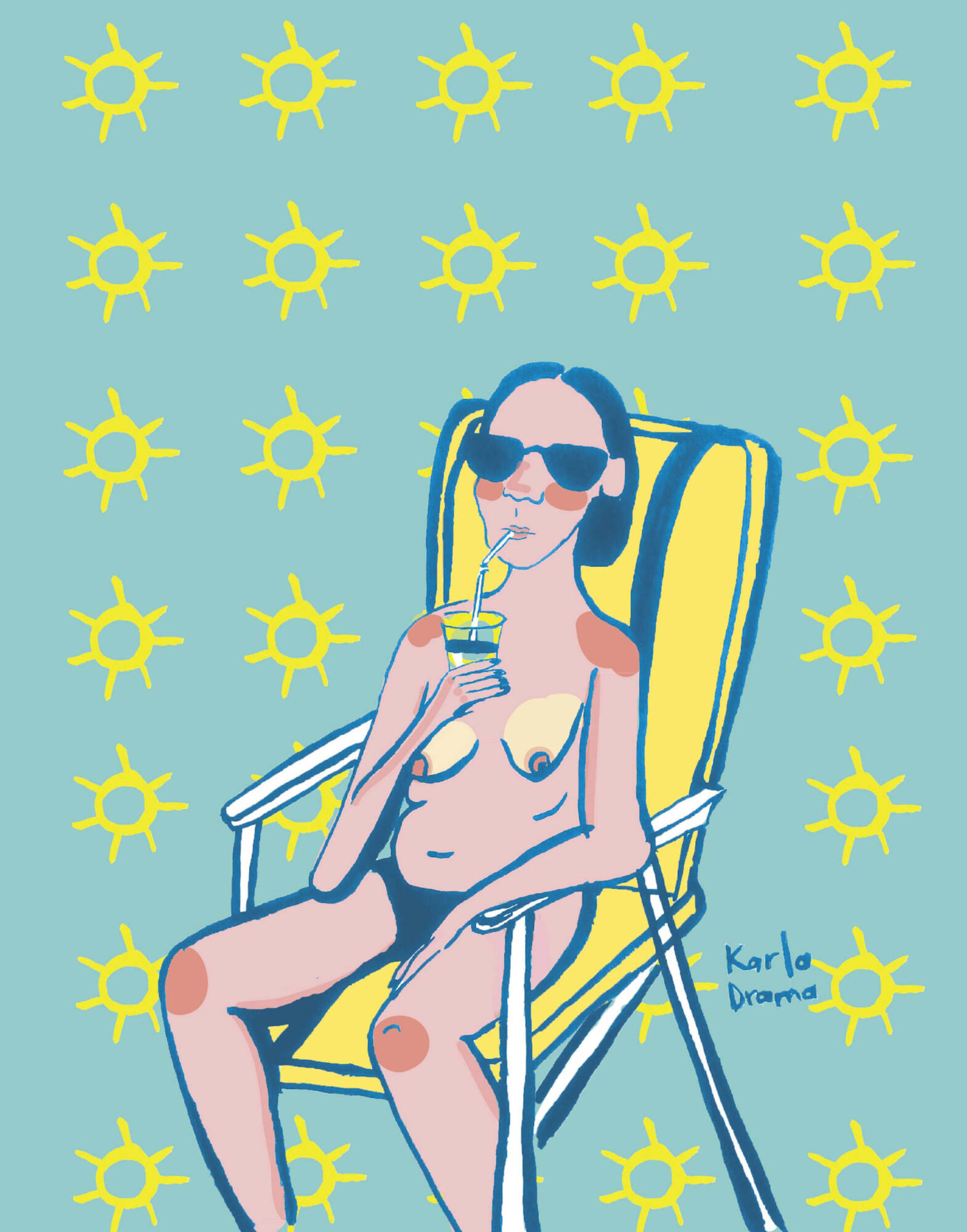 Girls don’t poo. Well, at least this girl doesn’t, and at least not for the last few days. You see, recently I had a minor surgery and since then I’ve been propped up on myriad forms of Oxycodone. (Oxycodone. Brand names: Oxynorm, OxyContin, Endone, Targin. An opioid analgesic prescribed to treat mild to severe pain. Side effects include euphoria and constipation) The shame of having to actually admit to myself I was constipated was too much, let alone having to go into the chemist and get a laxative or an enema- to be frank, I’d rather engage in faecal vomit. But it got me wondering, why do I feel so uncomfortable with such a normal and mundane bodily feature?

To preface this discussion, I should mention this isn’t my first run in with my bowels. As a budding tween I had anxiety that would present itself as tummy pains, constipation and diarrhoea (yes, at the same time and yes, it’s possible- ask anyone with IBS). Before anyone thought of anxiety as the cause I saw just about every specialist under the sun- paediatricians, gastroenterologists, even a pain hypnotherapist. I was poked and prodded and went through three gastroscopies and colonoscopies. And I told no one. Why? Because girls don’t poo.

Growing up I was taught that women didn’t have a digestive system. We magic-ed away our waste like the beautiful little fairies we were. Whenever a boy at school would fart in primary school the other boys would laugh and the girls would squirm, “ew!”

“Everyone farts!” little Nick would say, and one girl would turn up her nose, “Girls don’t.”

This girl, the nose-up girl, probably had hair slicked back in a plait with a bow. She probably had frilly socks on. She probably had a name like Emily or Chloe, but since 70% of the girls born in the late nineties were named the same she was Emily P or Chloe F. And this girl deserves a direct apology from every person in her life that forced the nonsense patriarchal agenda onto her that told her she had to be pretty and perfect and never, ever poo.

What exactly made us all believe women don’t poo, and how far back does it go? From my research the point where it starts to become gendered is around the late 1800s. Toilets were newly flushing and Victorian era women were blushing at the thought of being anything less than ‘pure’. And if you were too poor to own the hygienic flushing toilet you’d better just shut your mouth, and your rectum for that matter, and pretend you didn’t poo. Toileting became a privilege of the rich, and then a privilege of men.

Sweating, farting, defecating, urinating and ejaculating, these are things men do. But, and maybe sit down for this one, women do all these things too. In fact some people who were born with functional female sex organs also have another way of ejecting bodily waste- menstruating. So, why is it that something so human is so wildly taboo, but only for women? If it’s just a Victorian Era hang-up then surely we can scrap it from out society like we did with hysteria and using arsenic as a beauty product.

The extent women go to just to enable their digestive systems’ finest work is equally humorous, terrifying, detrimental to feminism and absolutely disgusting. The time has come to bask in the glory of the following stories from grown up nose-up primary school girls.

A successful, compassionate, strong woman who has lived with her partner for nine years and known him for over a decade shared her particular tactic to ensure her husband doesn’t find out she’s human. When she needs to do that booty business while he’s in bed, she’ll turn on the shower in the ensuite so she can poop in peace free from the sound-based embarrassment of a bowel movement. A more environmentally friendly way of avoiding this auditory embarrassment is to invest in the Sound Princess by Japanese toilet maker, Toto.  The device essentially mimics the sound of a flushing toilet, of course lessening major waste of water associated with showers, running taps or continuous toilet flushing.

My personal favourite story comes from my fructose-intolerant sister who found herself in bed with a love interest after a night of onion-y, garlic-y delicious pizza. Almost immediately after the settling into bed she was struck with that ominous tummy pain signalling the oncoming of a trombone traffic jam bum symphony. After hours of careful sphincter clenching the pain became all too much and at 2am, instead of admitting to her humanness in the company of a deeply asleep lover she faked a phone call. With her bed partner awake and alert she whipped out an Oscar worthy performance pretending she was desperately needed for a family medical crisis. She promptly left the situation and in her own words, “got in the car tooting, so to speak, all the way to [her] sweet, sweet pressure free home.”

Now, not all perceived and potential embarrassment can be avoided with electronic devices or a sudden disappearing act, and that is where improvisation rears its ugly head. The Poo Mitt (not a term I coined), is an act in which a woman, in order to avoid an audible poo splash, wraps toilet paper around her hands into a makeshift ‘mitt’ in which she defecates into and then slowly lowers into the toilet. Not a vibe, however not as uncommon as you may think.

The one thing a lifetime of gastroenterological issues has taught me is that there’s no reason to be ashamed of poo. Embrace the bits that make you alive and human. Ditch your poop sprays, throw away your Sound Princess and please, never ever make a poo mitt. Men, your defecation privilege is no longer solely your own: girls poo too.  And women, say goodbye to this faecal fiasco because girls do poo.