Writing and artwork by Emma 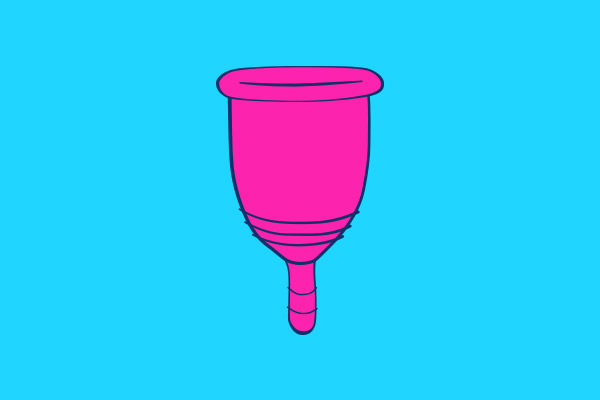 Five years ago, I was persuaded into trying scuba diving by my boyfriend while we were on a 3 month backpacking trip around Asia avoiding responsibilities and our jobs back home. This was not something I willingly went along with as I had an intense fear of deep water. Hell, I could barely swim without tip-toeing on the bottom. But all that changed after I tried out scuba diving and absolutely fell in love with it. So much so, that we ended up staying and becoming scuba instructors, not bad for a girl who could just barely doggy-paddle a few years back!

But for a girl, one of the annoyances when scuba diving is ultimately your period. It might be a nuisance in your everyday life, but it is especially annoying when you’re constantly in the water. I used to wear tampons but had to replace them every time I finished a pool session with my students, or in-between each dive. This is because tampons soak up the surrounding water, and you really don’t want to have a chlorine filled, or dirty saltwater piece of cotton soaking in your hoo-ha!

It was also annoying to dispose of tampons properly when you’re on a boat. If you’re lucky, you’ll get a toilet on the boat, probably a ‘marine toilet,’ where anything that goes in, goes straight out into the ocean. We all know not to put tampons down the toilet on land, but it’s especially important not to do it on a boat.

On top of the extra considerations I had to take whilst having my period on the water, I began to learn more about the unhealthy side of pads and tampons that not only effect the environment but also my body. Tampons and pads are laced with artificial odors, colors, adhesives, and polyethylene (PET) and is definitely not good for our ocean and environment. There were bins on the boat, where we correctly disposed of rubbish, but generally these were in the middle of the boat, and although there’s no shame, I definitely didn’t want to be holding a blood soaked tampon while trying to chat to diving students!

I wanted an alternative, and did some research where I stumbled upon the ultimate guide to menstrual cups!

And wow, what a game changer.

A menstrual cup is probably something you’ve heard about. Definitely a buzzword that’s going around, especially if you’re thinking of ways to cut down your single-use waste consumption. The menstrual cup is a small bell-shaped cup that you insert into your vagina where it collects your period blood before it even comes out. Because of this, you don’t have any smells or mess. A lot of people have a hit or miss experience with a cup for the first time, but once you get one that fits properly, it is so amazing.

There are so many benefits for using a menstrual cup as a scuba diver. Cutting down on disposable products is a big one, but I also love it for its convenience. You can wear a menstrual cup for up to 12 hours, which means I really only have to tip it out, rinse, and re-insert twice a day. Usually first thing in the morning, and then during my shower at night.

I also love it as it’s so discreet. Who hasn’t had a tampon string poke out from their bikini bottoms?

Check out some of the benefits for switching to a menstrual cup below, and if you need any further information on how to choose or use a menstrual cup, head to this website.

In 2013, Emma left Australia to embark on a quick stopover in South-east Asia before heading to London for work. But she never made it. Instead she became a scuba instructor in Thailand who now sees firsthand the amount of plastic waste washed up into our oceans. She created menstrualcupaholic.com to help more women make the switch to reusable period products!