Writing by Ellen Muller // This shifting archetype sold a false sense of power by blatantly exploiting feminist ideals, and it was a ploy which meant that cigarettes were arguably one of the products which had benefited the most commercially, from the ongoing women’s emancipation movement. 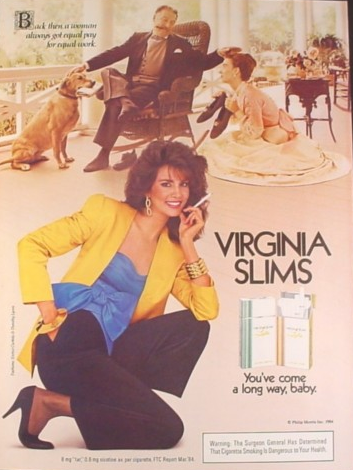 ‘I WANT A GIRL WITH A MIND LIKE A DIAMOND

I WANT A GIRL WHO KNOWS WHAT’S BEST

I WANT A GIRL WITH SHOES THAT CUT AND

In CAKE’s early-noughties anthem Short Skirt Long Jacket, this glass-ceiling-smashing vision being described is an ambitious, no bullshit, power-woman, whose eyes ‘burn like cigarettes’. She ‘uses a machete to cut through red tape’ and surprisingly she’s also an archetype belonging to a manipulative tradition of marketing cigarettes to women.

Smoking’s symbolic status reveals itself as strikingly gendered particularly throughout twentieth century cigarette advertisements; and as someone belonging to a generation too young to remember cigarette packaging being anything other than gangrenous feet and Brian looking grim, these relics of an alien past where restrictions or accountability were yet to be demanded from tobacco companies are curiously fascinating.

Like any advertisement material, cigarette marketing mirrors the social norms and gender scripts of its era; and while the western image of the male smoker also shifted with time, the same culture’s attitudes surrounding the female smoker have been much more subject to changing social conditions, particularly following the First World War.

Whereas tobacco companies long promoted cultural associations of the male smoker with power and ideals of masculinity; prior to the First World War, the female smoker was historically associated with prostitution and thus overlooked as a marketable demographic.

Just as the war marked a pivotal moment for female liberation, so too it marked the start of untying a deeply-rooted stigma attached to women who smoked. By compelling women to join traditionally male trades, the war incited women to further challenge gender roles through behavior such as wearing trousers, cutting their hair short, playing sport and smoking cigarettes. Each of these actions became statements expressing an equality with men, and remained prominent symbols following the war’s secession and into the 1920s – the era of the ‘flapper’.

This emerging atmosphere of the women’s rights movement was first treated as a commercially viable means to market cigarettes by Edward Bernays (1891-1995) – often regarded as the founder of public relations. Hired by the American Tobacco Company in 1929, and tasked specifically with expanding smoking amongst women, Bernays chose to exploit women’s desire for liberation on the recommendation of psychoanalyst A.A. Brill, who advised,

“Cigarettes were a symbol of the penis, and of male sexual power…Women would smoke because it was then that they’d have their own penises.”

Utilising an emancipation angle, Bernays organized a publicity stunt for New York’s Easter Parade, in which he hired a crowd of young debutantes to march while proudly smoking cigarettes. Bernays had also hired revered feminist writer Ruth Hale to prepare the invitations sent to the debutantes which incited them to, “… Light another touch of freedom! Fight another sex taboo!”, and notified the press on the day of the parade, of a ‘spontaneous’ gathering where,

Bernays’ meticulous manipulation of first-wave feminism proved lucrative, with women coming to represent 12 percent of the US cigarette market in 1929 – compared to 5 percent in 1923.

Ironically smoking’s historical stigma had helped frame it as an act of feminist defiance, with the demonstration successfully diminished the stigma attached to women smoking in public spaces as well as making cigarettes more overtly synonymous with independence – a connotation which tobacco companies would continue to encourage well into the early 1990s.

Looking from a contemporary perspective, perhaps makes first and later second-wave feminism’s presence more blatant across cigarette adverts directed towards women following the Bernays campaign – with these images reflecting the professional as well as sexual freedom women were striving for in the subsequent decades.

Precisely how independence was portrayed in these adverts fluctuated as feminist ideals in general shifted with time.  Yet one format found consistently across eras, were adverts which triumphantly reflected back to more patriarchal times and made comment to how much women had achieved in their fight for equality.

From Chesterfields suggesting in the 1930s that ‘women started to smoke, just about the time they began to vote’, to taglines of Virginia Slims – the first brand specifically marketed to women – such as ‘From Flapper to Female Lib’ and ‘You’ve Come A Long Way Baby’, the model female smoker was the very embodiment of independence and confidence.

By establishing such a synonymous link with cigarettes and the women’s rights movement – right as it began to progress in the twentieth century- the tobacco industry cultivated an image of the female smoker which ran parallel with the progressing aspirations of female liberation. Beginning as a ‘suffragette’ smoking her ‘torch of freedom’ she morphed into a 1980s corporate power-woman who ‘Dares to be More’ or is in a Viceroy Super Longs advert who’s ‘not about to smoke a boring cigarette’.

This shifting archetype sold a false sense of power by blatantly exploiting feminist ideals, and it was a ploy which meant that cigarettes were arguably one of the products which had benefited the most commercially, from the ongoing women’s emancipation movement. Bernay’s original campaign had achieved enduring success of across decades because it was wholly reliant on women’s disfranchisement and a growing hunger to challenge antiquated gender roles. Yet while it proved to be a successful advertising strategy, clearly it was also equally a deeply unethical tactic, as it sold a poisonous habit in the guise of representing a freedom that the tobacco industry had itself perpetuated.