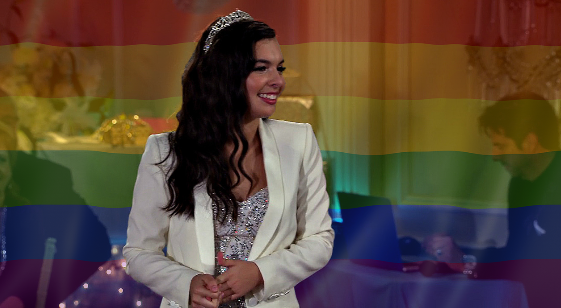 Elena Alvarez was the first fictional character that I related to on almost every level. It was life-changing to have someone that I felt so connected to; I had never experienced this before. That’s why I’m especially heartbroken about ‘One Day at a Time’ being cancelled by Netflix but I’m ultimately glad that I got to experience this character.

Elena being a feminist is something that I immediately found that the two of us shared. Throughout the entire show, her feminist beliefs, rants and behaviours remind me of our likeness to one another.  She constantly shared feminist knowledge to the other characters such as; “Men assert their power through microaggressions and mansplaining” and, when looking at a doll her father bought for her she pretended that the doll said, “My body proportions aren’t representative of a typical girl my age” and, a personal favorite as a theology student, “Can we agree that if there’s a God it’s gender-neutral, not a he or a she?” She never backs down from sharing her thoughts and opinions and is always ready to stand up and fight for what she believes in.

Elena’s relationships with her family is something that also helped me see the parallel between us. Whether that be through her relationship with her brother, her feelings of being the odd one of the family or her Quinceanera. She and Alex are the only kids in the family, just like my brother and I. Even though my brother is older, the relationship is still similar. The sibling banter and fighting exist both in the Alvarez and the Turner home. In the third season, Elena says, “Sometimes I wanna kill you, but just like in the normal way.”, something that I can definitely relate to.  They then go on to say that they need each other “to deal with Mom!” which is something that my brother and I often joke about. The sweet moment shared between Alex and Elena, on the boat, reminded me of my relationship with my own brother; when we’re not fighting.

In the first season, Elena also says a lot about feeling as if she’s the odd one out of the family, which is a feeling that I can again relate to. I joke about whether or not I was meant to be in this family as I’m not cut out for the amount of exercise all my family loves to do. Another family moment that I related to was her Quinceanera. As I’m not Latinx I didn’t have a Quinceanera, but I had a First Nations version of that. The feelings about the event weren’t the same in the beginning as I was really looking forward to mine, unlike Elena as she said that it held too many patriarchal roots. However, once she came around to it, we both felt the same.

I also connected with Elena over her realisation about her white-passing identity. The conversation arises after Alex is racially harassed and told that he should “go back to where he came from”. Elena says that “It’s amazing how lucky I’ve been. Even these days, in this openly racist world, I’ve managed to never have an incident.”. Her mum and Abuelita make uncomfortable faces and then her mum says “… you and your brother are different shades.” This is when we see Elena become aware of her passing identity. I’m First Nations but also British. I relate to Elena in passing, however, I wished that within the show it would’ve been the right moment to open the much-needed discourse about the privilege that comes with passing and how that can be used in a positive way to help our communities and uplift voices that have been marginalized due to skin colour. Yes, having people question my culture and background may be irritating but it’s nothing in comparison with harsh realities of discrimination faced by black and brown Native people.

Elena Alvarez is the only fictional character that I’ve been able to properly relate to. I pray that ‘One day at a Time’ is continued on another network and that Elena’s story can continue. In the future, I also hope that there are more characters like Elena to be on my TV screen; and the TV screens of other young girls who are figuring out their place in the world.

Abi Turner is a passionate young women who’s keen feminist beliefs heavily influence her writing and poetry. At sixteen, she’s the London Ambassador for Sad Girls Club, been published in University of Victoria’s newspaper, The Martlet, for her piece called ‘The Colonizer’s Unwelcome Gift’. You can also find her work in Sorjo Magazine, Broadly, Just a Bunch of Kids and The Jeans&Tee Collective. All this while also being a full time sixth form student. You can follow her on Instagram @saayehstakshitl and on Twitter @abzzturner.