Last year, Destiny Belgrave decided to change her art. She had just recently graduated from MICA with a body of mixed-media work that was intensely critical and at times darkly funny. In a papercut from 2018 called He Got the Whole World in His Hands, a red, white and blue Jesus makes the two-fingered sign of the cross with his right hand and holds a smiling Mammy head in his lap with his left. Belgrave’s work from this period examines Christianity as an axis along which racial power dynamics play out. These pieces were often heavily researched and drew on historical references and old white gospel paintings. When she took them to a critique with Wickerham & Lomax, the artist duo pushed her to consider making work based on personal experiences instead of religious historical artifacts. “At first, I was offended,” Belgrave told me. “But then I sat down and really listened and explored what they were talking about. I examined different aspects of my life. What do I enjoy? What truly means something to me?” The critique became an inflection point in her thinking. Her most recent pieces focus on moments of personal significance. “I guess I got all my criticism out,” she told me. 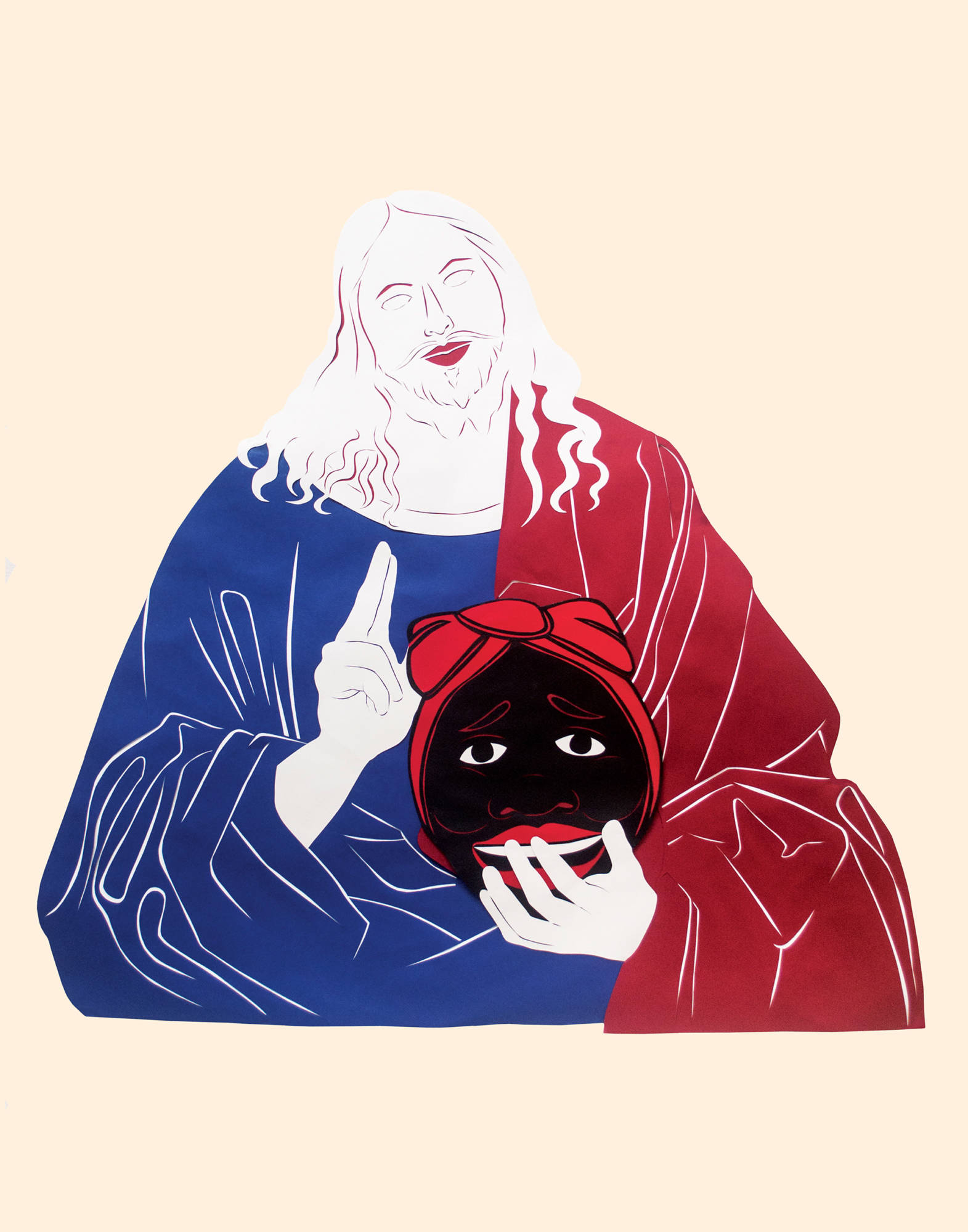 In her new work, Belgrave backs away from depicting biblical figures and stories but holds onto Christianity as a context. She lets go of the literal biblical but keeps a steady hand on the divine. Intimate family scenes and Black cultural rituals take center stage. Belgrave imbues them with the holy glow she previously reserved for more overtly religious subjects. In one of her recent digital illustrations, an adult offers a child a piece of fried chicken. Only their right hands are visible, set against a blank, peach colored background. The moment is immediately tender—the offering of food, held carefully upright and wrapped inside of a protective white napkin. Only the title of the piece gives the scene any context: After the Service. Belgrave positions this moment in the immediate vicinity of the church but outside its line of sight. She explained to me that these new works are “looking at Blackness and Black cultural acts as the spiritual forces that they are.” 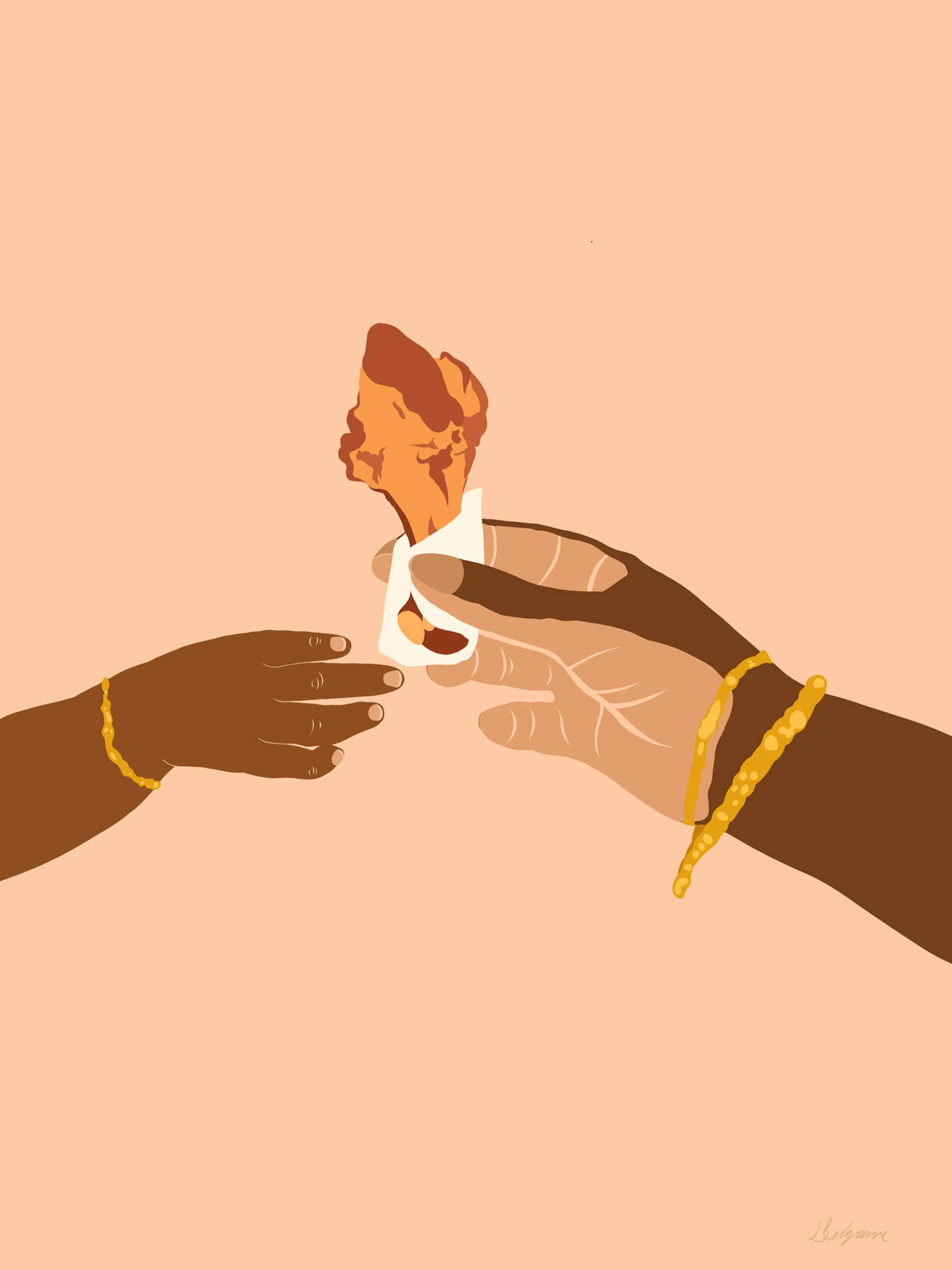 Back in December, Belgrave finally finished and posted to Instagram a long finessed papercut called After the Christening. The piece is particularly emblematic of this new era in her art. Personally, I saw After the Christening come through my feed and felt determined to interview the artist behind it. “What surprised me the most,” Belgrave told me, “was when I posted [the piece], it was received so well. People just really loved it. I’m always surprised whenever my work does that.” After the Christening is based on a family photograph, a portrait of Belgrave sitting in her mother’s lap on her grandmother’s couch. Cream colored and covered in plastic, this piece of furniture is a little joke from the artist. People of color especially, Belgrave told me, will recognize “that couch in your grandmother’s house, in her living room, that has plastic all over, that is special. You’ll never see that couch without the plastic.” 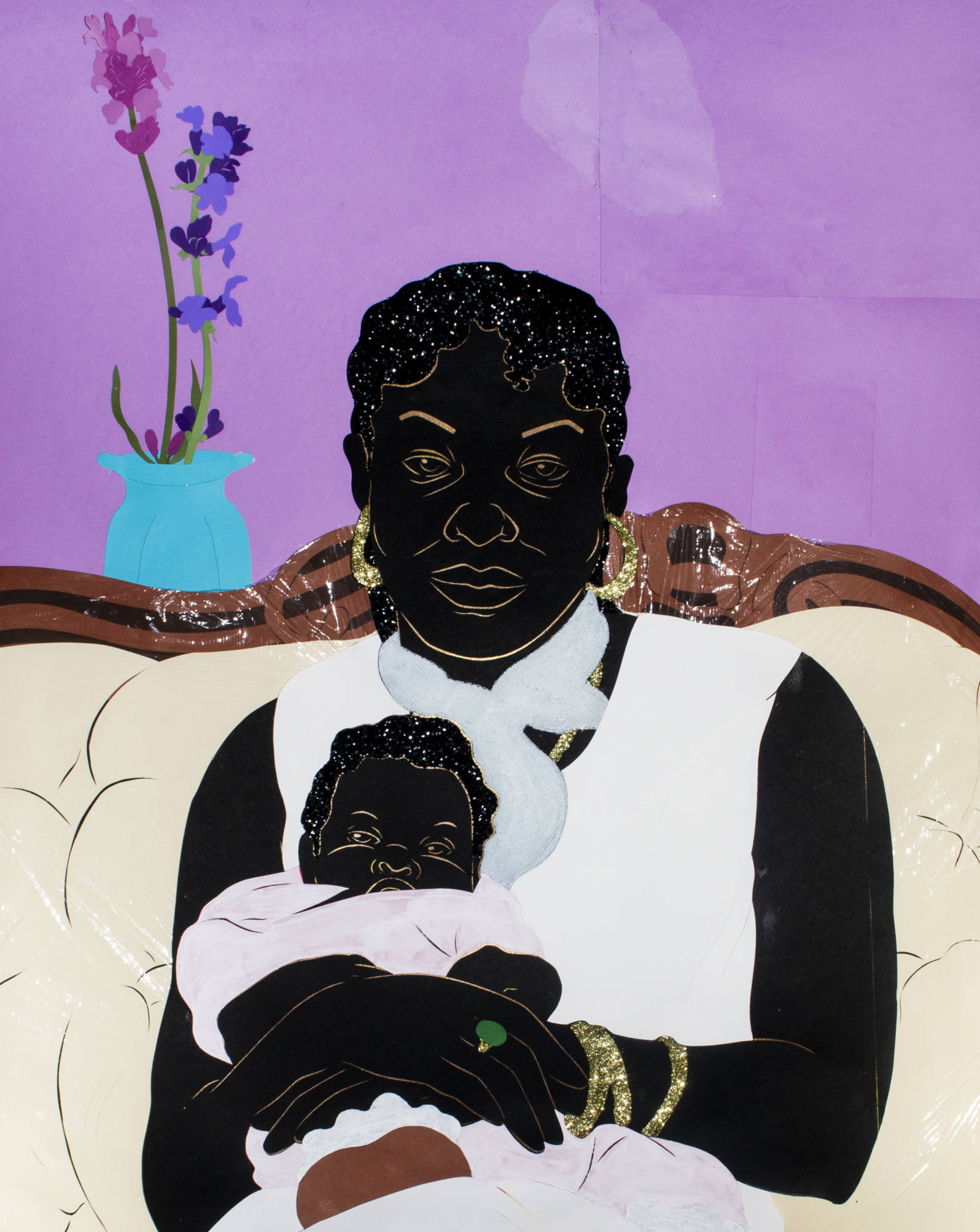 Visually, mother and daughter echo one another. They have the same round noses, the same eyes drilling out at the viewer. Their hair, waving closely against their faces, is cut from a black paper, speckled with stars like the night sky. These celestial crowns allude to classic Christian halos and the parent and child most often associated with them. The quintessential scene of the holy mother and new born baby becomes something softer here, something divine in its intimacy rather than its iconography. Both Belgrave and her mother wear white, but the baby’s clothes were cut from a red paper and then washed over. “I was really happy with that,” she explained, “because it talks toward some of the conceptual aspects of what happened during the christening. Being washed over with this water, this newness. It’s this spiritual thing that you know nothing about as a baby, but you’re still washed over with it.” 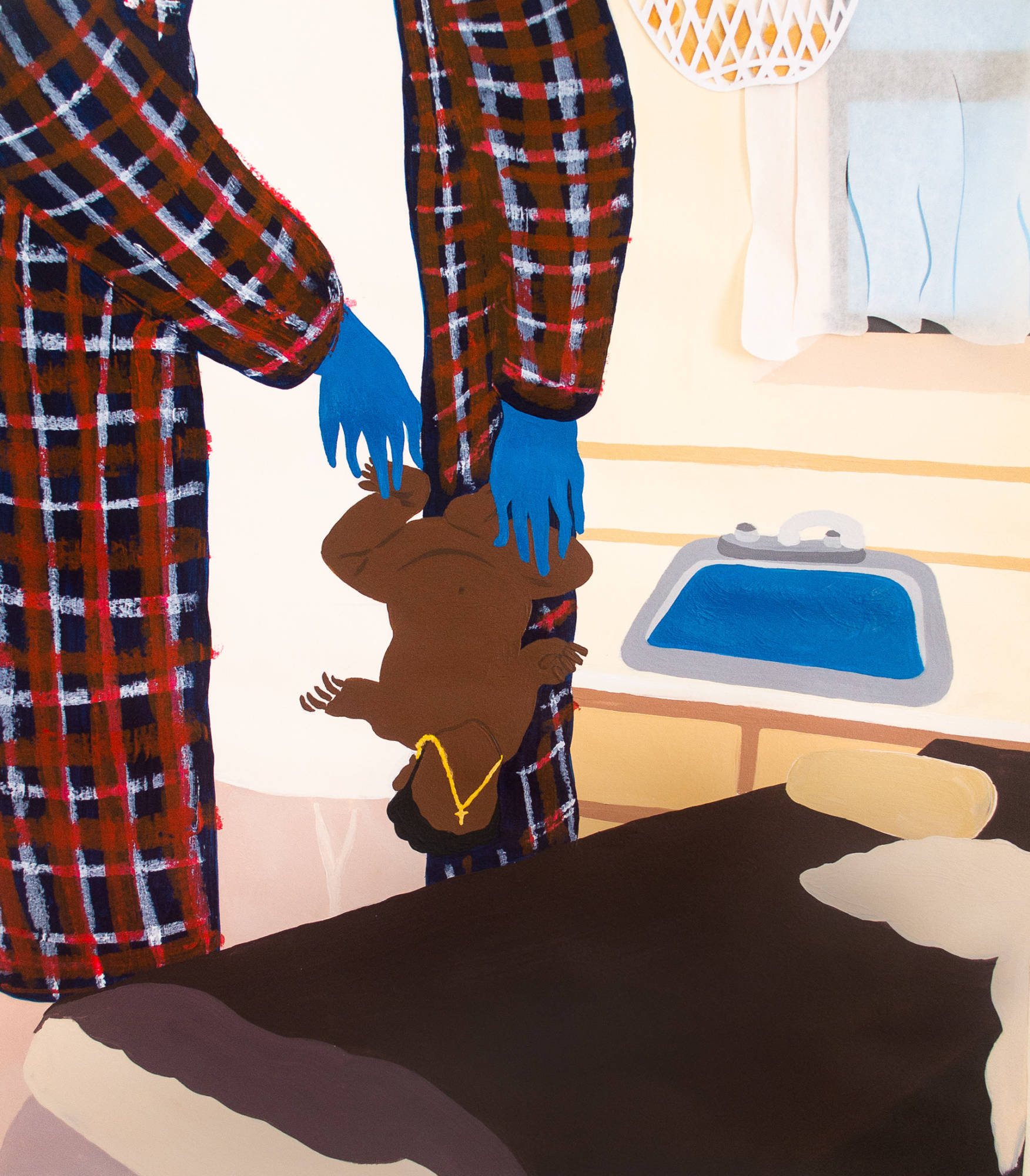 Belgrave seems particularly drawn to moments like this—stories and images of herself that she can’t remember, things that happened to her as a very young child or even before she was born. In at least three of her most recent pieces, Belgrave represents herself as a baby. Doing so opens the door to a place both real and unremembered, revealing scenes of charged personal significance. Post Baptismal Ritual, another recent papercut, translates visually a story told to the artist by her mother. When Belgrave was a baby, after her baths, her grandmother would stretch and form her body with her hands. “I wanted to make a piece about that beautiful, tender moment that I have no idea about, but baby me—who is still me, in a sense—had that moment. That moment is still a part of me. That person loved me. Those tender, physical things are still stored into me.”

The question of what belongs to us even without our knowledge or consent, what can be given to us even without our knowing it’s being given, hovers throughout Belgrave’s new work. Transitioning away from Christian scenes has freed the artist up to more fully explore her matrilineage and her spiritual inheritance in particular. These new pieces more accurately reflect the breadth of Belgrave’s belief systems. “I do believe that there is a god,” she told me, “but I also believe in a lot of other spiritual things. I believe in ancestral ties. Anything that your ancestors knew or believed or just had access to, you have access to that too.” 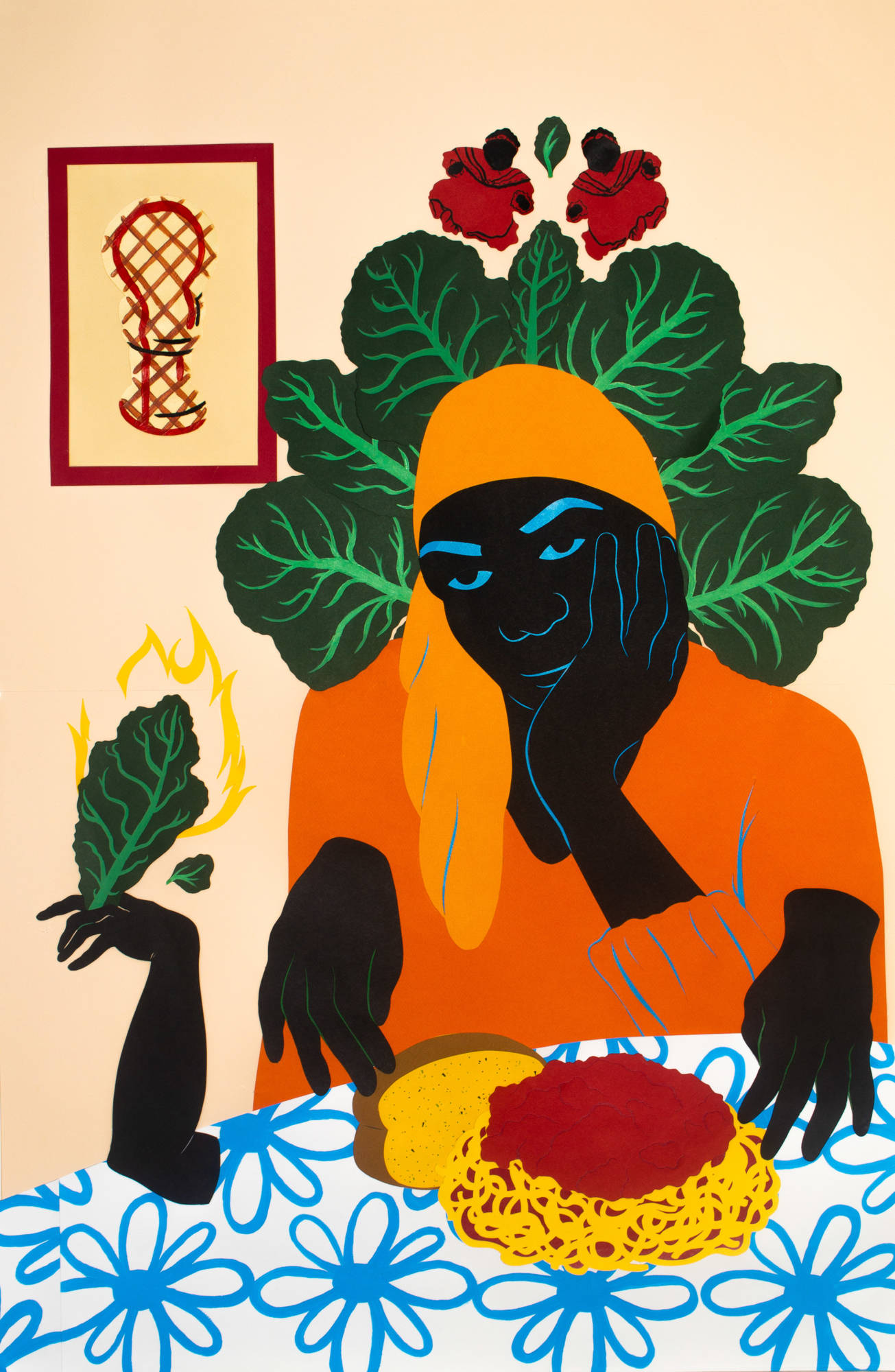 Belgrave has begun looking for ways to make this unseen legacy tangible in her art. Another new work, Manna from Heaven, depicts the artist’s grandmother seated at her kitchen table, surrounded by hands; only one of them is her own. Three float disembodied around her. “Each hand is associated with a spiritual act,” Belgrave explained. Two of them provide a meal. The third she described as an incense holder. The hand grips a burning collard green leaf between its index and middle finger. “I view it as a holy Black plant,” Belgrave said, “and burning it is a spiritual act as well.” She based these gestures on images of women’s hands in a family photo album—the past reaching out to caress the present.  “At this point,” Belgrave said, “I just want to get to the root of it. I don’t want to do too much or have too many things going on in a piece. I want to show what I’m here to show and exalt what I’m here to exalt.”

Some of the pieces referred to in this article will be showing at SPRING/BREAK NYC from March 4-9. Follow Belgrave’s work on her Instagram.

Sonia Feldman is a writer living in Cleveland, Ohio. She operates an email newsletter, which sends one good poem a week. Find more of her work on Instagram.

Sonia Feldman is a poet and writer living in Cleveland, Ohio. You can find her visual poetry on social media and other miscellany on her website.