Review of Juju by Erandhi Mendis 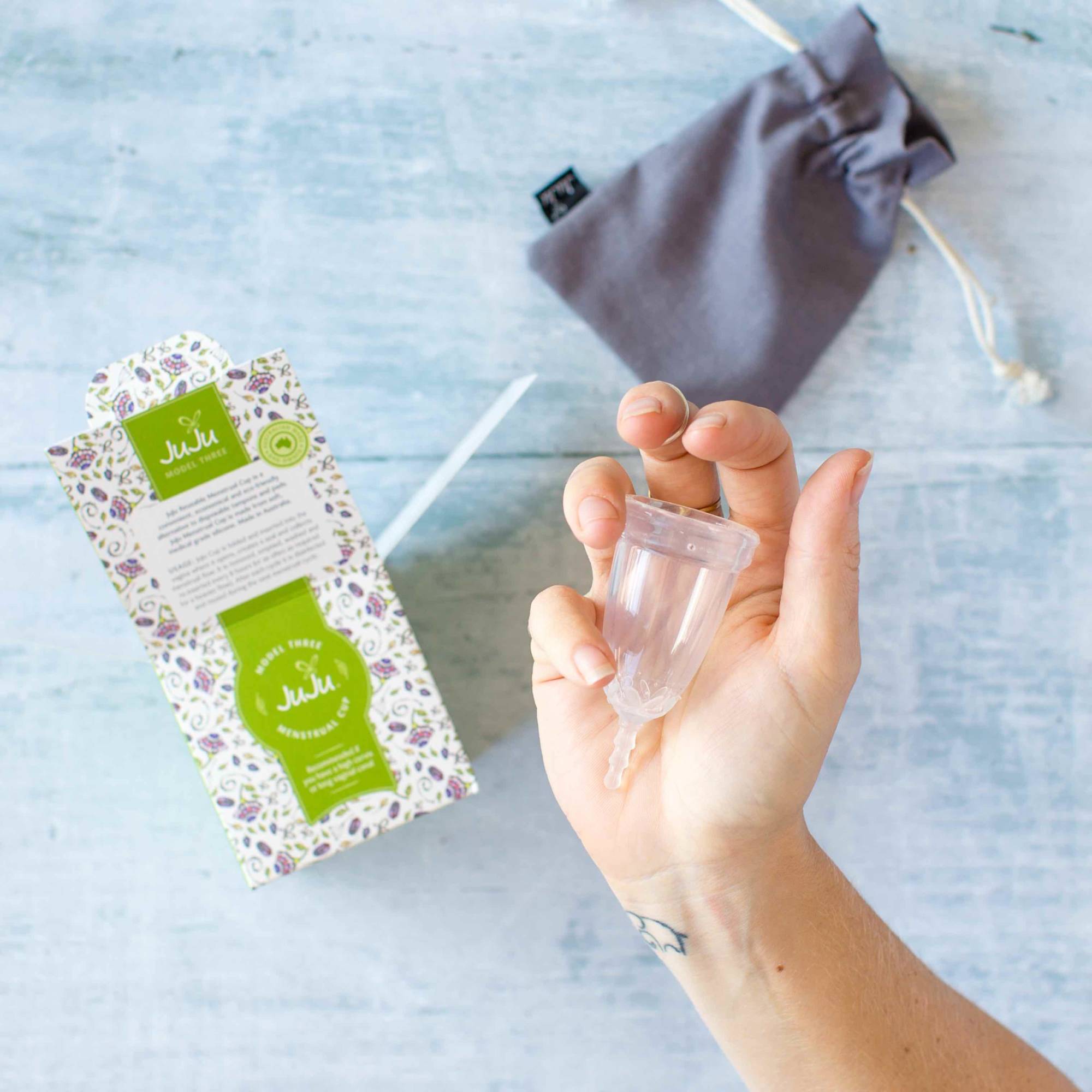 To me, confident menstrual cup users seem like the period equivalent of people who wake up at 5am for hot yoga and a green juice – they just look like they have their shit together. It’s the kind of activity that appears unattainable enough for most of us mere mortals to think it is aspirational, but intimidating enough for us not to commit.

For a long time I definitely shunned the idea of average human beings – let alone myself – being capable of using a menstrual cup seamlessly and regularly. And then suddenly my best friend became one of those hot yoga green juice period goddesses; she had her shit together right in front of me – and unexpectedly, menstrual cups didn’t seem so out of reach.

After months of her pestering me to buy one and join what can only be described as the upper echelon of feminine hygiene, I stumbled upon targeted marketing for a cup, without thinking, clicked to order and waited for it to arrive. 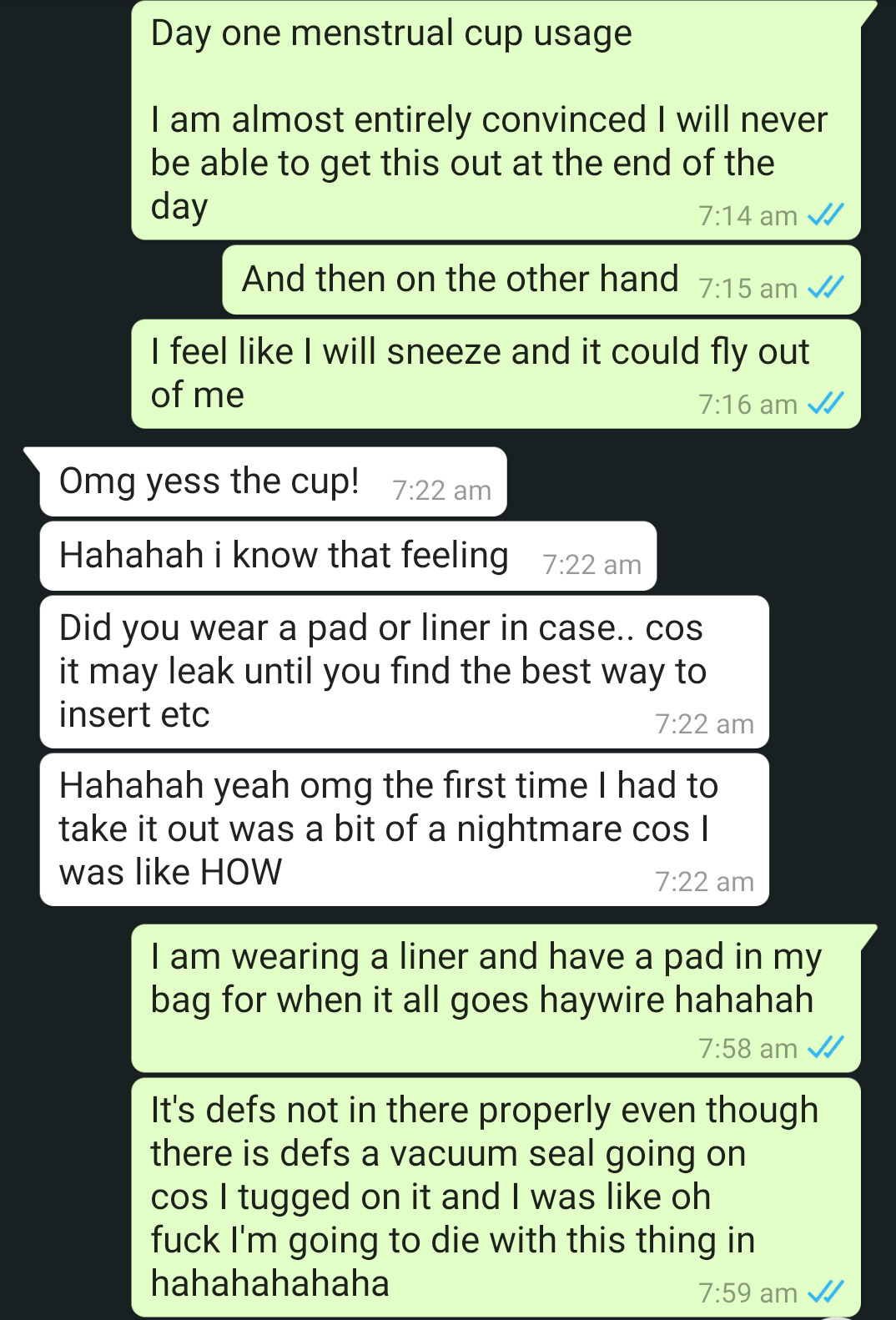 I stuck with this cup for a while but something was off. The stem felt uncomfortable and long even when I trimmed it and I struggled with leaks far too regularly even after a few periods. I was too stubborn to give up but despondent enough to know something wasn’t right.

As divine intervention would have it, good friends – this was when my sister in law told me about JuJu.

See, not all cups are made equal because no two vaginas are the same. One would think that would have been obvious to me: a vagina owner. The first HUGE difference between me buying a no-name brand off what I now think was probably the dark web, and using an Australian made product, was that out of nowhere I was being asked questions about my cervix.

My cervix isn’t something I often think about, pretty much the only time I’m aware of her is when I’m having a pap smear and then you can definitely guarantee it’s the only thing on my mind. As it turns out, knowing your cervix intimately is molto important when choosing a menstrual cup. When I received the JuJu high cervix model in the mail I noticed that it was much slimmer, taller and had a rounder stem than the cup I had used previously. It was also slightly softer to the touch and after reading the insert about how all of Juju’s cups are manufactured in ISO standard sterilisation/have undergone toxicity testing/tick every box you could ever think of etc suddenly I was horrified that I had previously put a cup inside me without even checking if it was medical grade silicone???? Don’t do that! Do your research and buy responsibly!

Now to the fun part – insertion. I cannot stress how much easier the JuJu was to insert and remove – my vagina had met it’s perfect match and thank god it was neither cotton nor vaguely phallic. Inserting a menstrual cup is always a little stressful the first time, I will not lie. But if you pick the correct model I can promise you will feel more self-assured as you shuffle and squat awkwardly. Because the JuJu website has a fun little tool to help you select the correct size and model I felt confident when I heard it “pop” open inside me that I wouldn’t leak the way I had with the other brand. To be honest, those first few days I felt like I was driving the Porsche of feminine hygiene, which sounds so over the top but when I compared the ease of the Juju experience to the strange no-name branded cup I bought off an instagram ad – this was vagina luxury. Custom built, easy to grip, soft enough to fold but deep enough to hold 3x more fluid than a pad or tampon?? Seemed like I was living inside a fake news story. But the best parts of my JuJu for me personally are firstly the rounded stem with easy to grab nodes: I really can’t stress how much having a rounded stem means you will not feel the cup at all, it won’t stab you or get lost in you – it just exists peacefully and it’s a beautiful thing. Secondly, using the JuJu made me FEEL like a hot yoga green juice period goddess because I forgot about having my period while wearing it. Which I had only assumed was sorcery or lies before this experience. But complete truth: my periods are now a whole day shorter, I do not cramp anywhere near as much and I can keep my cup in alllllll day.

Menstrual cups can seem super intimidating and yes I will not tell half-truths, they take practice to use but it is worth the effort as I absolutely do not think I could imagine a life without my cup now.

Come join the hot yoga green juice period goddess club – I promise it’s not as exclusive as it sounds.