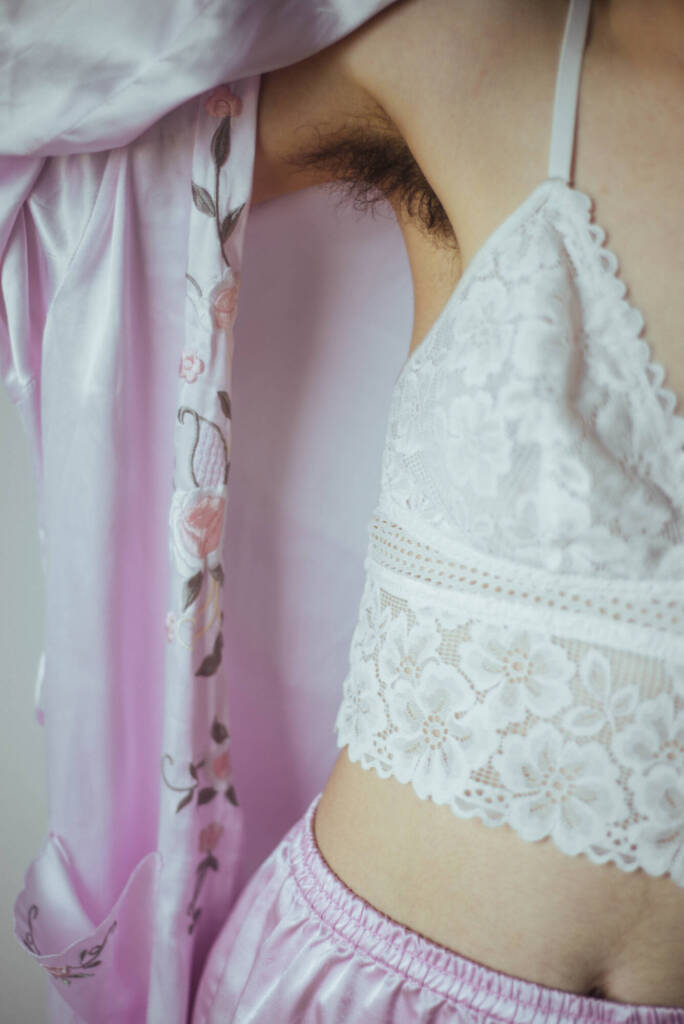 Surveying my body in the full-length mirror of my bedroom now, I am shocked, and a little sad, that it has taken me until twenty-three years old to see how long my body hair grows. How it looks unencumbered by foul-smelling hair removal cream; pink razors across my skin while sitting on the slippery floor of the shower; hot red wax spread on that sensitive fold of skin between my thigh and my hip. It’s obscene to me, now, that I had never seen my body in its truly natural form. It’s not so bad. But I don’t yet prefer it to my hairless alternative.

Recently inspired by a few days’ of naked holiday frolicking throughout bodies of water and along creek beds with a bunch of new female friends, who all possessed all their natural body hair, I ditched the razor for good. Throughout our nude adventuring, we giggled at how anyone who arrived after us would be shocked to find some naked wood nymphs meandering through nature; some wild women. The subversive rebellion of the presence of their hair made me think – what if we’d always retained this naturality, what if we’d never begun stripping ourselves of it?

I began slathering my legs and underarms with hair removal cream that smelt like decaying animals in primary school, because I couldn’t run a razor up my skin without accidentally cutting it. I was entering puberty and I didn’t want anyone to see my minute strands of underarm hair in my gymnastics leotard. How did eleven-year-old me know it was time to begin dutifully removing all my body hair, once it passed the acceptable downy fuzz of a child and began to turn into that of a woman? I don’t recall anyone ever telling me to do it. But I do recall my language class making fun of our teacher in grade one for having the most minor of underarm stubble during summer – and I can’t recall body hair on any woman I saw as a pre-teen.

When I started having sex as teenager, my pubic hair was painfully stripped off each time I started dating someone new and slowly reintroduced months into each relationship – after giving a polite heads up to the boy in question that I would, in fact, be maintaining a inoffensive landing strip instead of a smooth and hairless landscape. I hoped they were okay with it. The luxury of being in a relationship was letting your pubes get a little bit wild. There was no such allowance with casual sex. That was the unwritten rule.

By age twenty-one, when I was at the beach with a group of people and a male friend gave me a well-intentioned heads up that my pubes were sticking out of my bikini bottoms, I barely moved from my sunbathing position, lifted my chin slightly to purvey the situation, shrugged and said, “that’s okay, everyone has pubes”. This change in my confidence with my body hair is the natural entropy of leaving behind the scrutiny and insecurity of adolescence, and largely unsurprising. Yet, my increasing security with my natural form has plateaued in recent years. My decade-long conditioning of viewing my hairlessness as sexy has not been deconstructed enough to feel secure in my own complete hairiness.

There was a group of girls in high school who all had armpit hair that they bleached and dyed neon colours. I saw them at parties in sleeveless tops, their turquoise underarm hair poking out when they lifted their arm to take a drink, and I thought it was an act of attention seeking – like they were trying to make sure everyone knew they were subversive die-hard feminists. Now, I realise, that’s actually the entire point. My body hair’s merely an act of protest against the expectations I’ve submitted to without question, from puberty to adulthood, but it’s a protest I’m not necessarily comfortable marching in yet. I want to signal to other women that this return to wildness is acceptable, but in doing so, I am returning to my adolescent age of body scrutiny and image insecurity. But rather than continue the removal habits I’ve formed over the years; I inspected my discomfort further.

When it comes to body hair removal, how much of it is choice, and how much of it is conditioning? We can all agree there are few better feelings than sliding freshly shaved legs between freshly clean sheets; that periods are less messy without pubes; that most women genuinely prefer how they look without body hair.

But if our entire gender had never removed our body hair, would we ever have conceived these ideas in the first place? Would we prefer our smooth legs and hairless pubic area if no other women around the world had removed their hair before? Would we see it as more hygienic to have bare underarms if everyone around us had long hair there? Would we feel sexier without hair if we’d never had sexiness and smoothness become mutually exclusive? I resolutely say no, absolutely not.

Everyone is entitled to their own preferences and beliefs, and I know many women who agree the patriarchy influences their hair removal, yet still prefer their body that way, and I celebrate their right to choose. But this removal is truly a tax paid only by women, and it’s hard to veer off from the homogenous preference of hairlessness when you’re never exposed to subliminal messaging that pubes, underarm hair, leg hair, can be sexy, or even merely acceptable.

I am always a little taken aback when I see a woman with underarm hair or leg hair, and now having it myself, I constantly see the person I’m talking to’s eyeline travel down to my underarms, register a spark of surprise, and come back up to my face. It always seems more shocking to see a hairy woman, than it is to acknowledge that stripping our bodies of hair is an expectation bore only by women.

Can you picture cishet men discussing over coffee how many laser sessions they have left until their pubic area is as soft as a dolphin’s? Can you imagine them spreading the cheeks of their bum so a beautician can pour hot wax around the perimeter of their asshole? Go to the store and take a look at the razors marketed towards men and women – the men’s packaged in blue and grey, without frills, cheap. The women’s are pink and purple and covered in flowers, cursive script spewed over the plastic packet implores us to get our legs ready for summer. They’re always more expensive. Take a look at the signs that say “feminine hygiene” while you’re there. Acknowledge that they don’t mention mensuration. Periods. Bleeding. Never acknowledging the wildness, the naturalness, of being a woman. If they encouraged women to embrace the taboo language surrounding their periods; marketed the razors and the hair removal cream as less of a necessity – they might stop profiting off our female shame altogether.

The monetary cost grows larger with laser, and waxing. It grows larger still with trips to the doctor when we’re left with ingrown hairs that we’re not sure is something more sinister. You might tell me that laser’s actually super cheap these days. Depending on where you go, they have all kinds of crazy deals. But the true cost – the mental cost – is the planning, the timing, the pain. And no matter how convenient, how cheap, how relatively painless, it’s expensive so long as it’s a cost a man would never have to pay. It’s brain space men have never been expected to sacrifice.

I’ve got Women Who Run with Wolves – a revered handbook on embracing a woman’s wildness and power – on my bedside table, and yet, I’m still a little disappointed with the look of hair underneath my own arms. I’ve got GRLPWR tattooed on my hip and yet, I still wear tops with sleeves to family dinners, attempting to side-step the awkward glances and invasive questions about why I’ve chosen to ditch the razor. I’m not convinced my insecurity is worth my protest, yet. But hey, I’m sure the falling shards from a shattered glass ceiling are a little bit sharper than a razor.