Interview of AURORA by Freya Bennett 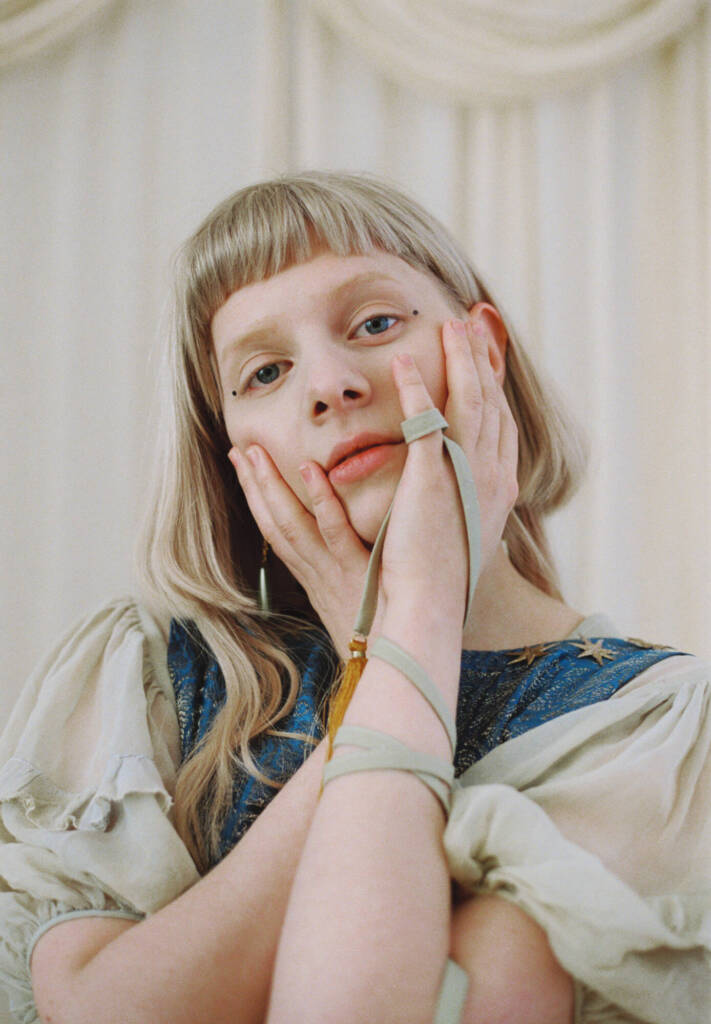 I was first introduced to AURORA in 2016 when my Piscean best friend spent lazy afternoons at my place – napping, scrolling and holding space for me in my post-miscarriage haze.

I was immediately captivated by AURORA’s blissful energy and Runaway soon became the anthem for how I was feeling – vulnerable but truly alive.

Fast forward to the end of 2017 and I gave birth to a baby girl I named Aurora.

Aurora was a name we had loved for a long time, but it held extra meaning after the healing power of AURORA’s music, which helped me through my winding path to parenthood.

In my post-birth fog, I completely missed AURORA’s last tour to Australia, so you can imagine my excitement when I heard that she will be touring Australia in March 2023!

I was lucky enough to have a chat with AURORA in anticipation of her upcoming tour – and I discovered that she is one of the kindest, most generous and wise young women I have had the pleasure of interviewing.

In the leadup to my chat with AURORA, I showed my nearly 5 year-old daughter some film clips, we listened to AURORA’s voice in Frozen 2 and we both had a go at doing the dance from Cure for Me. Because my little Aurora was just as excited about the interview as me, I decided to include her in it – a decision I was nervous about, but also confident in as I strive to make visible my dual (and often competing) jobs as mother and freelancer/business owner.

When AURORA arrives on our zoom call, I immediately feel her warmth and presence. I start by introducing my little Aurora, to which AURORA exclaims “Oh! My name sister! Hello Aurora! Nice to meet you!” I was so heartened to see AURORA’s genuine interest in my daughter and I.

We briefly chat about our mutual excitement about her return to Australia. I tell her how chuffed I am to see her at the Palais theatre in Melbourne, an ornate building where I saw all my idols perform when I was a teenager. AURORA tells me how much she loved Melbourne on her last visit.

I dive in to her music with a question about the concept behind her latest album, The Gods We Can Touch . For me, the album feels earthy, grounded yet anthemic.

“I love music that has a lot of drama and emotion and a lot of contrasts between the noise and the silence,” She says. The Gods We Can Touch is about “regaining the love and respect for your own self, for the women on this earth and for the planet.”

I ask her to expand on this beautiful concept. AURORA explains that a long time ago, we felt ‘god’ more in the earth, the ground, the water, in our mothers, in the sun, “in things we could touch and feel right here.” After some time, we removed ‘god’ from earthly things and put them “up in the sky”. She explains how that has changed our behaviour and how we think about our earth and our people. “I think it’s done some damage and I think we’ve forgotten about a lot of the love we should have had.”

AURORA has in the past been very vocal about her love for nature and how important it is for humans to remain connected to it. As I try to ask her what her favourite place in nature is, my daughter Aurora sticks a cellophane bow to my forehead. I joke that I’m not sure if bringing my daughter to the interview was a good idea, but AURORA immediately engages with her, telling her that I now look like a unicorn “but with not a horn, more like a flower – a uniflower!” (We have since adopted this creature in our house with multiple ‘uniflower’ drawings pinned on the fridge.)

To answer my question, AURORA tells me that she needs to go to nature because she loves the feeling of quiet, and no people around – “it’s good for the imagination, I think”. She tells little Aurora: “I used to hang out in the forest all the time alone and I’d pretend that I was an elf, hiding in the trees. It was just so magical, and I remember pretending I could talk to the trees and talk to the wind!” My daughter looks at me in awe, as if to say who is this magical fairy in front of us??

AURORA continues “The wind has been my best friend all my life, especially the cold wind  – because I feel like she’s a woman – and it’s nice because when I travel away from home all around the world, the wind kind of keeps me company – she follows and it’s very nice.”

I share how I feel the same but with the rain – how as soon as I see a grey day I feel comforted.

I ask AURORA about the song Cure for Me. I understood it as a self-love anthem, and ask if she wrote it as a love letter to herself.

“I feel like sometimes I don’t even exist in my music or in my songs because I write much more for the world,” she answers. This surprises me, as I work under the assumption that artists are writing about their personal journey. AURORA ponders this, then explains, “It is kind of a love letter to self-love, which can touch me as well.”

AURORA has been vocal in interviews about the privilege of ageing and I want to hear more about this topic. As a woman in her mid-30s who has been observing the pressures the world places on women, the topic has been on my mind. I ask AURORA how we can embrace ageing in a society that is obsessed with youth, and she jumps in: “I know, it’s so silly, isn’t it? Especially with women.” She sighs. “It blows my mind that we think it’s beautiful when men age but it’s not beautiful when we [women] have signs of ageing – it doesn’t make any sense.” We commiserate over women feeling they have to live up to a socially constructed standard and AURORA reiterates how strange she finds it.

“Wrinkles show that you’ve been laughing a lot, smiling.” We agree on the beauty and wisdom contained in the eye wrinkles that come with age. AURORA comments, “I think it’s super beautiful and I hope more women embrace it, because we can, together, change the way beauty is looked upon [in regard to] age and women – especially for the next generation, if we expose the world more to it.” Society wants to control us and when it sees it can’t, that we’re going rogue and acting with confidence, it scares the world a bit. She concludes:

“the world is ‘forked up.’” I appreciate her consideration in her changing her wording for my daughter, still sitting on my knee. I tell her that I want to see the wrinkles that appear on my face and my daughter stops me, holds my face, and says, “You already have wrinkles mama.”

It’s time for my daughter to ask AURORA a question herself, as promised, but she suddenly gets shy. We had found out that AURORA loves the movie Trolls, which is one of our favourites, so we ask her about the film. “I think I have seen it 100 times and I love everything about Trolls – it’s one of my favourite movies,” she laughs.

We ask AURORA what kind of troll she would be and after careful consideration, and a suggestion from little Aurora that the singer would be a ‘singing troll’, AURORA agrees: “A singing troll that maybe lives in a tree, and I think my hair would be light blue and my dress would be the same colour as a lime.” AURORA suggests a princess troll for my daughter, with a pink dress with rainbow hair, to which my Aurora nods enthusiastically.

My next question for AURORA is “what is your favorite song to sing in the shower”. After a quick ponder she starts singing Careless Whisper, commenting that it is appropriately dramatic for the setting. She adds “and any song from Lord of the Rings.”

I thought my last question was going to be a lighter one, but AURORA responds with the most beautiful, important message of our interview. I ask her who it would be if she could meet anyone in the world, from the past or present, and do anything with them.

“I don’t think I would love to meet anyone.” She begins, then after some thought,  “I’m a huge admirer of indigenous cultures because the indigenous peoples of the world have almost single-handedly preserved what we should be so grateful to have left of our forests, of our land and I feel they remember a lot of things that the world has forgotten.”

AURORA continues, “The world has been quite cruel to indigenous people.” And while she acknowledges that newer generations haven’t been the ones to directly inflict the cruelty she says, “things linger in the air from the past, and we must acknowledge how messed up the past has been.” I am impressed by her choice of revering nature over meeting humans, and tell her so.

She elaborates on her desire to respectfully learn from indigenous cultures about how to continue to take care of the earth:“I will be so happy to die if we are handing down a planet that breathes.”

It is a beautiful way to end our chat and I thank AURORA for her time. She warmly thanks me and adds “Your daughter was absolutely lovely, I love when interviews become less rigid.”

I left our chat feeling a warmth in my heart and butterflies in my belly in anticipation for her show in March. You can get tickets here and I hope to see you there!

AURORA The Gods We Can Touch – Australian Tour: