Living On The Borderline

Writing and photograph by Lucy Hotchin // Borderline Personality Disorder is a cluster of “symptoms” which can manifest in very different ways, making treatment difficult and often times very specific to the person.

Writing and photograph by Lucy Hotchin 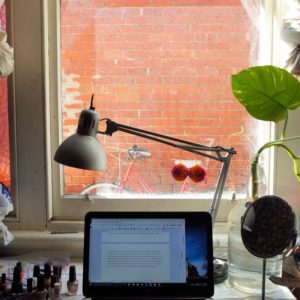 I have written an article like this before, and everything seems to change, yet still stay the same. My psychiatrist of six years has recently retired, meaning a LOT of change is on the horizon: different doctors, different hospitals, and different medications are all a part of having a co-morbid mental illness. But within the private psychiatric sector there are many things that stay the same. The same walls painted in muted tones with railings for the elderly and those a bit wobbly on their feet. Private rooms or double rooms depending on the hospital; my most recent stay in a private psychiatric ward was in February for a hellish medication change. It goes something like this:

The room has a single bed, a small wardrobe, a desk built into the wall, and a chest of drawers with a TV mounted on top. There is a small en-suite bathroom attached with a not-so-great shower (they never are), a toilet, and a sink with cupboards underneath. I have this weird compulsion when it comes to these places; no matter what state of mind I am in, I can’t help but notice that everything is built in a way to prevent any opportunity to attempt suicide. There are no hooks, the shower curtain uses magnets to stay up, the shower head is completely smooth and angled downwards, chords run through the walls… you notice these things when you’re in a situation like that. And once you notice the first time, you will always notice these things wherever you go. Everything is designed to have minimal impact on your senses– the hallways and the doors and the floor; everything is calm and simple. The room numbers appear in big writing outside each room although you will inevitably get confused and open the wrong one as they all look the same. Group therapy sessions range from general support groups to those centered around specific themes of medication, healthy lifestyles, and self-esteem, to name a few. You sit at a designated area to wait for your medication to be dolled out four times a day. You eat the same mushy food with too much salt and questionable amounts of oil and you sit outside and smoke and chat to other patients (if you are a smoker). There is always some sort of drama within this small ecosystem, ranging from drug-dealing, to manic episodes, to celebrating Christmas or New Years within the confines of a restrictive setting. These things never change. There is a silent acceptance of the vulnerability we all have by being in a psych ward, an acceptance that can be beautiful when you know that some people are going through the worst times in their lives and we can still manage a laugh here and there. Even though I know this particular hospital very well; I still get lost, the repetition can be disorienting. Some things do change– I’m now on a much lower dose of medication; everything has been reduced which shows I’m learning to cope better with my emotions. This makes me feel quietly proud and puts a subtle smile on my face.

Borderline Personality Disorder is a cluster of “symptoms” which can manifest in very different ways, making treatment difficult and often times very specific to the person. As someone with Borderline Personality Disorder (BPD), my emotions come on high, and don’t dissipate easily. It feels as though they are nerve endings showing through my skin and if they’re touched the wrong way, the intensity can be unbearable. My impulse control is dulled in these moments, leaving me with options that are incredibly drastic yet seem perfectly reasonable at the time.

Here are some statistics to give you a better understanding of BPD (because everyone loves statistics). BPD is an illness that has a high rate of co-morbidity, meaning people often have BPD and something else, or lots of other mental health issues that pop up for many reasons. There is a biological aspect to the illness, and an environmental one. Around 70% of people with BPD have some form of trauma in their pasts; this trauma can lead to unhealthy coping mechanisms and in turn a BPD diagnosis. Around 75% of BPD people are female. The history of BPD is highly stigmatised, due to a combination of poor understanding, difficulty with treating the disorder, and ingrained sexism and misogyny that have defined the perception of the disorder.

My own experience reflects this stigma: I’ve had difficulty finding a psychiatrist and many mixed judgements of my scars and my behaviour. I’ve also had some pretty yucky and downright disgusting comments thrown at me or overheard by a variety of people, including health professionals. After receiving my diagnosis I went into overdrive to negate the behaviours deemed “dramatic”, “selfish” and “manipulative”. This neurotic behaviour and self-hate around my own diagnosis has led to more problems than before I was diagnosed. The disorder can be mild or extreme and people’s own experience leads to different manifestations. For a very long time I was incredibly unwell; I spent a lot of time in hospital, tried many different medications, had two rounds of Electro-Convulsive Therapy (which worked, by the way). I also have more scars on my body than I can count– I’ve tried. Going through the most intense periods of my life left me incredibly suicidal a lot of the time and I’d often self-sabotage myself (for many different reasons). My friends all knew about my mental illness; I never hid it and talked openly about it hoping it would help people understand, and I think it did most of the time. About a year and a half ago something changed, I still haven’t quite figured out what, but I started planning for a future. Before this I’d put off any long term plans because I doubted I would be around. I’d spent so long being so unwell that when I started to get better there was nothing to do, nothing to keep me around which led me back down the depression hole. So I got a rescue greyhound and enrolled in a Diploma of Art Therapy.  When I got my greyhound, Roy, it pushed me into the realm of responsibility and it was terrifying but it was what I needed. As much as I was terrified, I was ready to have some responsibility because I was well enough. I still go to hospital every now and then, but the time between admissions is increasing. I see a psychologist as often as I can afford and I take my medications every day. Borderline Personality Disorder is pretty damn horrible, it messes with the very core of who you think you are, leaving you questioning and doubting everything.

The stigma is huge and well-spread through media, the psychiatric profession, and even amongst ourselves. However, it can get better. One year you may find yourself screaming at your parents for permission to kill yourself, your whole body heaving with such intense sadness that you’re so scared it will never change; but then maybe two years or five years or ten years later you find yourself writing on your laptop with sunshine streaming through a window in front of you. Music playing in the background as your house-mate works on her illustration business plan and maybe you’ll have tears in your eyes as you write because it has gotten better and all those years fighting are starting to pay off.