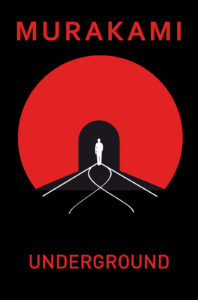 There came a soft crack from somewhere at the back of the tram. It was shadowed by a scent in the air, an insidious mingling of charcoal and oil. My heart quickened and unbidden images from the book I just finished reading rose to my head.  Commuters keeling over on train floors, pink froth obscuring their lips. Men scrabbling at train windows with rapidly weakening fingers. People collapsing face-first onto the streets of Tokyo.

I laughed nervously. Wow, Murakami really got to me.

Then there was a second crack, this one like a barbed whip rending the air. The smell intensified, and there was smoke blooming from beneath one of the seats. In an instant everyone was up and rushing toward the tram doors. We spilled out onto Swanston street, most of us bustling ahead with barely a backwards glance. I backed myself up directly opposite and watched as the tram sat there in the middle of the road, softly breathing smoke through its cracked windows.

I don’t know what happened to the tram after that, or what was responsible for the smoke. The commuters on board were miffed, not maimed. But what most interested me about the incident was the way we as commuters reacted; first with apathy, and then striving to forget it as quickly as possible. This was one of the key issues in that book I’d read: Underground, by Haruki Murakami.

A non-fiction work, Underground fits into the genre of inquiry. The narrative of the story is firmly centered on March 20th, 1995, a date made infamous by the members of the cult Aum Shinrikyo as they simultaneously released sarin gas on five different train lines within Tokyo’s intricate and typically overcrowded subway system.

Beneath the surface (pun intended), Underground leads us to an emotional core that is less concrete, namely an exploration of “Japan as a society”, and “the Japanese as a ‘form of consciousness.’” Murakami himself clearly states his intent as he felt a “vested duty” to “delve deep into the heart of [his] estranged country.”

It may be speculated that an additional motive for undertaking this explicitly “Japanese” work was that prior to his seven year period of self-imposed exile, Murakami had been criticized by the likes of Masao Miyoshi, a prominent Japanese literary critic, for “exhibiting an exotic Japan” custom-tailored to his clients abroad. Reiko Abe Auestad, in an analysis of modern Japanese literature, says that Murakami “lived up to the critic’s” expectations to take on specifically Japanese issues by investigating the 1995 Tokyo gas attack.

Drawing influence in structure from the works of Studs Terkel and Bob Greene, Murakami sets out to achieve his aim of “understand[ing] Japan at a deeper level” by interviewing as many victims of the gas attack as possible. “I wanted…to acknowledge that each person on the subway that morning had a face, a life, a family, hopes and fears…and that all these factors had a place in the drama,” Murakami says. Present in each chapter of the novel is the great effort and emphasis Murakami has placed on preserving the voice of each of his interviewees.

Considering the tragic nature of the gas attack that left twelve dead and hundreds more suffering from severe after-effects, Murakami’s own voice has been tailored in consideration to his interviewees. His narration throughout the interviews is almost painfully respectful and at times apologetic as he acknowledges the inadvertent pain he inflicts as his subjects are forced to open old wounds in front of him.

However, this polite and tender voice changes as we progress beyond the first interviews. In the analytical essay with which Murakami concludes Underground, he expresses frustration with the inadequacies in Japan’s crisis-management system that left so many stranded in their own suffering in the wake of the attack. He speaks with a fierce philosophy as he criticizes the Japanese media’s “high-flown excesses” as it encouraged an “us and them” consensus among the Japanese population. He accuses even the ordinary Japanese citizen of overlooking the issues raised by the attack, bitterly declaring, “the rain that fell on the city runs down the dark gutters and into the sea without even soaking the ground.”

Murakami himself states that one of the criticisms of Underground at the time of original publication in Japan (1997) was the “one-sided” viewpoint that it presented to its audience. Despite defending himself by saying that he had no intention of being “wishy-washy” by writing both sides of the story, the later 1998 publication was amended to include “The Place That Was Promised”, a mirror-image of interviews from the Aum perspective of the event. The English translation did not find publication until 2000, to which English-speaking critics concurred with Japanese critics. Daniel Zawelski states that the interviews of victims “blur together” and describes the conversations with Aum members as the “more memorable half” of the novel.

Reading Underground, I was inspired by Murakami’s use of voice as a way of connecting reader to subject. His alternation between active and passive voice served only to bring to light the voice of his subjects, and to make his own voice ring out all the more clear when he brought home his points of issue in his concluding essay. My own voice at the time of writing is often over-descriptive, and Murakami’s simplistic and humble approach has inspired me to pare back my own writing. I admired the way Murakami was able to take his personal impressions of a surreal tale of a religious cult’s attack on conservative society and with use of language and narrative technique turned it into something inherently personal and emotionally affecting.

Underground touched me to the point that at the time of the (albeit small) explosion on my city-bound tram, I was all too aware of how similar we all are; and how any society may be a breeding ground for extremism and violence. You read incredulously of Japanese businessmen who stepped right over the prostrate bodies of their fellow commuters, but in the end you have to ask yourself:

What would I do?