By Ramona MagazineLife, LIFE & RELATIONSHIPS, Think About This, Your World
No Comments 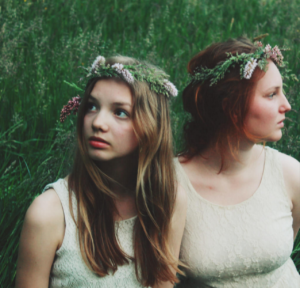 Allow me to just create an image for you, of a girl I saw last weekend. She couldn’t have been older than 11 or 12, and came to my till at the shop I work at with her family. She was wearing leggings and those trendy sports trainers everyone has. She had a bag on her shoulder that was larger than her torso; she had pierced ears and straight hair. She was wearing a blue cut-out blouse and I was just so…surprised. She was dressed and made up like I was supposed to be dressed and made up as a 20 year old. I mean, I’m all for wearing what you want, and kudos to her because it was a lovely outfit. I was just so confused. I couldn’t help but remember the days when I was in the second half I primary school, and first few years of secondary. I mean, I still get anxious about wearing leggings and I can’t afford fashionable sports trainers (not to mention my ears have now rejected earrings thrice and it takes an hour to straighten my hair). I just finally understood what we talked about in my a-level sociology class: the loss of childhood.

I often find myself confused at girl packs who wear identical outfits, only because I personally never understood the feeling or want to style myself identically to my friends. I feel like as a child I had an “oh look at me, I’m different” attitude particularly with my style, but as a grown-up, it’s often considered a tad attention-seeking to act like that, or to give off that kind of attitude—even if unintentional. Yet when I was a child it was my experience that that’s what you’re “supposed” to do. You’re supposed to accidentally put eyeshadow on your cheeks because you thought it was blusher, or wearing glittery mascara and flare jeans, or corduroy with patches! Is it just me? The photos of me as a child contain very vibrant raincoats, matching vest and short combos, stringy scarves and those god-awful train driver hats. I remember having a pink hoody with “angelz” written on it, thinking it was so bad-ass. The dragon wrap skirt I had? The camouflage alice band? They’re all just awful, but that’s not the point. At the time I loved them, I thought I looked so bloody cool. Of course, looking back is a bit cringe, but it’s how you feel at the time that matters.

My point here is that you don’t see so much now. I don’t know if it’s just England (you never know), but the girls I see aren’t pulling out glitter roll-ons and pink or blue sunglasses. The girls I see out at the park or on their shopping trips these days are wearing white high waist jeans, Nike trainers, and crop tops. They’re trendy, they don’t have anything remotely embarrassing about their person. If they look back on photos from their childhood, they’ll probably be smiling at how well dressed they were! Three girls around 12 or 13 years old came in to where I worked the other day, and I found them intimidating, despite being 7 years younger than me, because they were dressed so well (and their elitist attitudes didn’t help, as they were saying something was faulty and that their friend should ask for a refund because it wasn’t good enough). When did young people get so grown up?

Of course, I think girls should always feel free to wear what they want, but I can’t help but feel they’re missing out. As strange as it may seem, I think it’s a little sad they won’t have that embarrassing phase with awful haircuts, too much eyeliner, and the same (pouty) face in every photo for about two years straight. It’s funny! It’s absolutely hilarious to look back at old photos of you and your friends. I spend hours with friends just crying over old videos of poor karaoke and photos of old crushes and birthday parties. It’s such a wonderful thing to do and it would be a shame to miss out on that experience. Despite utterly detesting most of the old photos of me, I wouldn’t bypass them if I had the chance, because that’s how I became my present self. My current image and style is a result of all the fashion mistakes and stylistic phases I went through. After all, how else can you develop and become your own individual self? I guess what I’m saying is I want to get rid of that pressure for girls to outgrow girlhood at such a young age, and for them to dress a certain way. Girls should be able to stumble and fall though their younger years until they find out what suits them—it’s the best way to work out who you are, and what makes you feel comfortable. The awkward parts will eventually be balanced out when you work out who you want to be, and how you want to look, and will ultimately be something to look back on and laugh at when you’re older. I want it to be normal to be uncool;  acceptable to be a bit weird—at least for a little while.