Interview of Teja Mae Godson by Amanda Attanayake // Every now and then I’ll come up against someone who thinks I don’t deserve to enjoy video games or certain films because I’m female. It can get tiring, but I’ve never really let it get to me much. 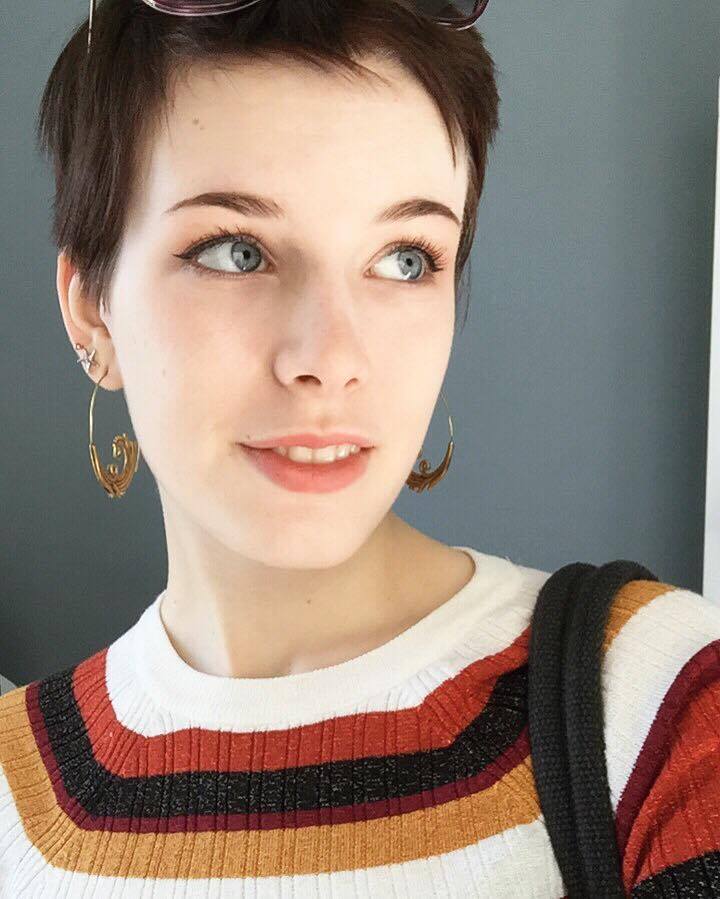 I’m a bit of an arty feminist, and a complete nerd. I love cats, I’m a massive Star Wars fan and I spend a lot of my time drawing and playing video games. I’m living in Sydney (sadly without my cat), I like long walks on the beach as long as I can get pizza afterwards.

What are you up to this year?

Trying to stay on my feet! I managed to land myself an amazing position in game design with a great company, and I’m putting off a uni degree for a year to get hands-on into an industry I love. I’m living out of home, in Sydney, for a few months. Art has always been a passion of mine and it’s just so incredible to be able to combine it with one of my hobbies.

How did you get into game design?

It was all a stroke of luck, really! I create 3D illustrations as a hobby and every now and again when I make one I really like, I’ll put it up on an online portfolio. I’ve done a few odd jobs here and there of design work but I really didn’t expect such an influential company to find my work online and contact me out of the blue last year with a job proposition. I worked doing freelance concept work for the company Robot House for a few months before moving to work for them full time as an artist.

I honestly love being able to wake up each morning, ready to head off to a workplace with wonderful people, free tea, and a job that I really love doing. I don’t think I’ve ever willingly woken up at 7am, 5 days a week before this!
It’s such a creative profession, and I can just take a brief for what they want a particular part of the game to look like and just run with it. It’s a very freeing job that allows me to really push my boundaries and think outside the box. I also just love learning, about the programs I use, and also about everyone around me and how they work together.

How was the move from Melbourne to Sydney? Are there things you miss about Melbourne?

The move was pretty tough. I’ve been making my own money for a while, but it’s really different living out of home compared to being independent in a city you know well. I have a lot of family in Sydney to support me, though, which has been fantastic, but being 100% independent has been a learning curve.
I honestly just really miss my mum. She’s such a big part of my life, and has been so supportive throughout this whole process. She always shares my selfies on her Facebook page with a cute message! I lived with her before I moved and it’s been a big change to not be in the same house. I miss not knowing the streets and the city as well as I used to, but it’s also a bit of an adventure.

How would you describe the environment in which you work?

It’s generally quite quiet and dark. We share the office space with a large special effects and animation company, and a lot of their work requires the lights to be off!
The environment itself is very friendly. I’ve often found myself making a drink or my lunch in the kitchen and running into someone I’ve never met, and we’ll have a great conversation! My workmates at Robot House are honestly some of the nicest people you’ll ever meet, too. They’ve been really inclusive and very welcoming as I’ve joined the team and every day we all go out to lunch together! It’s a very work-friendly environment and it means I can be really productive (most of the time).

The industry is widely regarded as being male-dominated and discriminatory towards women. Have you encountered sexism in your job?

Not in my current role. Where I work right now I’ve encountered nothing of the sort – while it’s a male-dominated workplace, everyone’s been pretty great.
But I have certainly come face to face with it on the internet. As I’ve mentioned before, I’ve put my things up online, and I have a lot of ‘nerdy’ interests too, which means every now and then I’ll come up against someone who thinks I don’t deserve to enjoy video games or certain films because I’m female. It can get tiring, but I’ve never really let it get to me much. It’s honestly sad that so many girls take it for granted that there will be men in their lives, that they will have to deal with, that will tell them they can’t enjoy their own hobbies.

What strategies do you use to deal with it?

What do you love about being a girl?

I love the companionship of being a girl. I love the unspoken trust between so many girls and the empowerment that can come from the smallest of actions. I was at an industry event at a bar recently, and I didn’t really know a lot of people. I ended up finding a ground of girls all sitting around a little table and just joining them, and really appreciating the welcoming atmosphere as they realised I didn’t know many people and took it upon themselves to be my friends. I love the support we all give each other and the shared experiences that bring us together.

What’s difficult about it?

Sexism. Conditioned sexism in everyday life, the stuff we don’t inherently realise is sexism. Male workers talking over women in board meetings – assumptions based on gender – even small, seemingly harmless jokes perpetuate sexism. All women across the world face sexist ideals, and the fight has been continuing for many, many generations. Fighting like this is tiring for all women, as all we can do is educate and retaliate and hope to move forward.

What are your plans for the future?

Do what I love. I’ve got no concrete plans at this time, opportunities pop up left and right. If I head back to Melbourne, I might get a retail job or do some freelancing, pick up the science degree I put on hold. I might continue to get more work in Sydney, or elsewhere. All I know is that I don’t want to waste my time doing things I don’t enjoy. Games are definitely something I enjoy working on, but I like to give myself enough freedom to be open to new paths too.

What advice would you have for other young girls who are interested in designing or creating games?

Don’t let anyone stand in your way. There are always going to be people who won’t appreciate the things you do, no matter how hard you try, they’ll try to find ways to discourage you. They’ll be strangers, co-workers, bosses and friends. People will assume, because you’re female, that you don’t know what you’re doing or talking about. Sexism is real – it’ll try to get you down. Straighten your back and put your foot down when you need to, don’t take on more work than you know you’re capable of when people ask you for it. Don’t be afraid to go to people for help or guidance; the companionship of being a girl in the games industry extends throughout workplaces, and I’ve found any woman in this industry is a friend in times of need.

Can you leave us with a quote?

“In your lifetime you will meet many who will take issue with you and what you do – it is up to you to reflect upon your behaviour and determine if their complaints are valid. Don’t break yourself for those who would ignore you when you bend. Some things you must simply let go.”