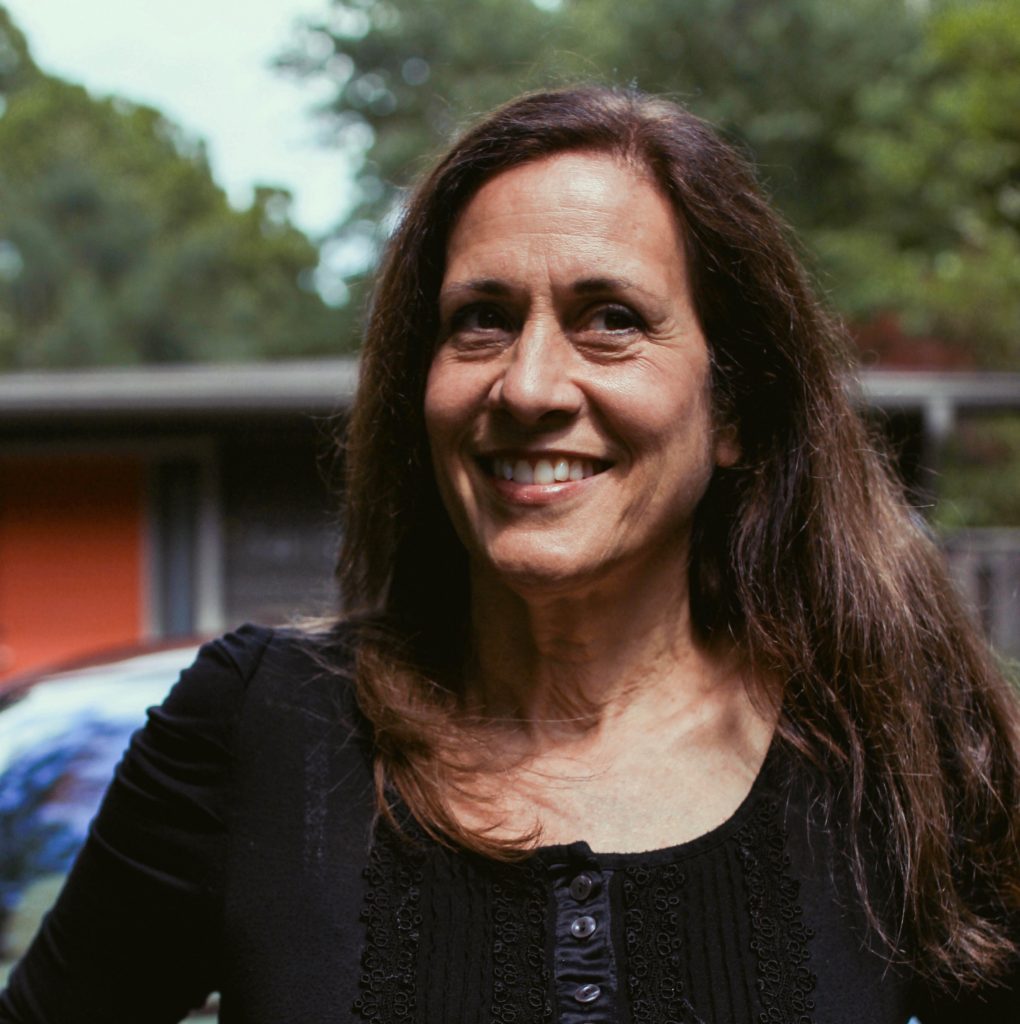 My biggest interest is music, specifically composing music. I love to garden, dance, do yoga, and I love to cook. I also used to played in an all-girl rock band in New York City, I curse too often, I went to High School in Paris (therefore I speak fluent French), and I am a hippy chick.

What do you do for a living?

I teach and direct a new performing ensemble, which means I compose music for that group and other groups as well, and some choral music. Sometimes I also record people in my studio.

Yeah, in general I’m very happy. I’m having trouble with my job right now, so I’m not so happy during the days as I could be, as opposed to if I had a less stressful job, or maybe a job that fit me better.

What do you like most about being a girl?

The universe is a feminine entity. The earth is feminine, and really, it’s the coolest thing to be. If I had to explain it, you know how the girls are the X chromosome and the guys are the Y chromosome? Well all those things that fell off of the Y chromosome from the original X (female) chromosome, the boys are kind of missing. Girls and women are just so powerful that they have been suppressed for a while, but it’s really starting to turn around. More girls and women are in positions of power and are helping the planet move forward, because really, the whole planet looks to us to do that. Women also cooperate and coordinate better in comparison to men, such that they work in a very different way than the male mind, so we have a better chance of everyone doing well. There’s an organization called The Girl Project that I’ve always loved. You donate money and the statistics would show that the women of the community would get that money. The research shows that, when they gave men the money, they would [more likely] spend it on himself, whereas when they gave women the money, they would care for their children and they would [use it to] care for others in their community. They were much more about sharing and supporting others than they were about competing and being the one to get everything, and sometimes that’s just the way the two genders differ. I think women are more cooperative and tend to do more for others. Women are more spiritual than men. I mean I love men. I have a son and a husband and I think it creates a great balance to have a male and a female, but clearly, if the men are always in charge, there is a problem. Because when women are “in charge”, they’re actually more cooperative.

What makes you vulnerable?

Sometimes when being a female, you are more vulnerable. Even with my own daughters, I feel like I’m concerned when they’re in places that are not safe. I think as women, we are more vulnerable because of our size and that it is easy for men to control us, physically. Sometimes when I’m not in a really safe place, like a city or something like that, I might feel vulnerable. In my own personal life, I mean I think it’s a good thing to feel vulnerable in a lot of ways. It’s like the warrior who is stronger is the one who actually can allow him/herself to feel vulnerable, because it’s part of who we are. You know, the ability to be vulnerable is okay. It’s okay to feel that way, and it actually gives us strength in a lot of ways. All in all, there are many times where I feel vulnerable, but I feel like it’s very much a part of life, and it’s something that’s very important to share with others. I would feel vulnerable if I couldn’t protect my kids from anything, because when you have kids, everything that they do, you feel as if it were you. It’s a hard thing to separate yourself, as a mother, completely from what they’re going through. You do feel vulnerable because you can’t fix things sometimes. Also, you feel vulnerable when you show your faults, and/or your weaknesses. Because if you let them in all the way, it means you’re showing them everything that’s going on. You’re sharing all of those fears or things that have gone wrong. Sharing your mistakes, yeah, that’s a big one right there for vulnerability, because sharing the mistakes you’ve made would’ve made you feel very vulnerable. But then again, if you surround yourself with people with whom you feel safe, there’s not such a feeling of vulnerability. There should be those few people, and you don’t need many of them in your life, but you need enough of them so you can be open and be completely yourself and not feel scared about that. It’s not going to be a vulnerable feeling letting them in because you know that they really love you 100%, and then it won’t matter to them at all. There are those people to find in life. Wherever they are, they’re around, and it’s a very important thing to find them.

What makes you powerful?

I feel powerful when I create “lasting change”, like going to a march or working towards a common goal, something that can make a difference in people’s lives. I also feel powerful when I’ve worked hard on something. But in a deeper sense, when I’m feeling powerful is when I’m feeling at peace within myself. If you’re not in sync with your mind and heart, then you’re not going to feel very powerful, but if you’re in sync, then, you feel more powerful. When you can be vulnerable and can really connect with other people in a deeper way, that’s when you feel more powerful. I think also when you have someone that’s listening, or when you can really connect with someone and discuss things, it’s not that you feel powerful in the way of power over someone- just that you’re powerful within yourself means that you’re kind of at your best.

What about you sets you apart from everyone else?

That’s a tough one because you don’t really want to be set apart, but one of the things that might set you apart is your ability to connect with others, or your ability to really love people. But in other words, to be different from others- yeah, sometimes we crave to be set apart, like I have always wanted to (because we all want to be special) create my own art, do my music and create my stuff, so that I have something that is truly mine. Because when you create art or music, you’re creating something from nothing, and that feeling is really a beautiful thing. I’ve always liked to feel as authentic as possible. To me, that’s being something special. To be authentic, in other words, means to really follow what it is you love and try to do that really hard. To be real with people, to be authentic with how you do it, and to not fall into letting this materialistic consumerism that is taking over and killing our planet [do that], but more importantly, feeding our ego. Having the desire to always want more, buy more, and work more for this job that you don’t like so that you can obtain materials that won’t make you happy, but to strive to be an authentic human being- that’s what I think is what’s really, really cool. Maybe because I’m always trying. That sets me apart. That I’m always trying to improve on anything.

What advice would you give to your younger self?

I know the first thing that comes to mind is, because I’m an introvert, I think there would’ve been more opportunities for me in different ways in my life, even in music and other things, that I could’ve had if I opened my mouth and spoken to someone. It’s taken me a long time, especially in moments where I’m in a crowd and I have to network and do stuff like that; it is still hard. I mean, it’s better than it was, but I would’ve forced myself to say things, take that first step and to be afraid to talk to someone, or to raise my hand in a crowd (I would never do that). When I look back, it’s funny because right now in this phase of my life, it’s always the career things I could’ve changed or could’ve planned better. I chose a very difficult thing to go into. To try and make a living as an artist, and not have to teach- I probably could’ve figured out ways to do it early on and I didn’t, so maybe I would’ve said “yeah, why did you wait till you were 40 to get your masters?” I could’ve done thing differently strategy wise. I should have asked people more questions and that came from being shy, not wanting to ask questions, and looking stupid. I would tell my younger self to be less afraid when asking questions, because that entails a whole lot of aspects in your life that could be made better, if you could just ask and not worry about having to know all the time. That would be my biggest thing, for sure.