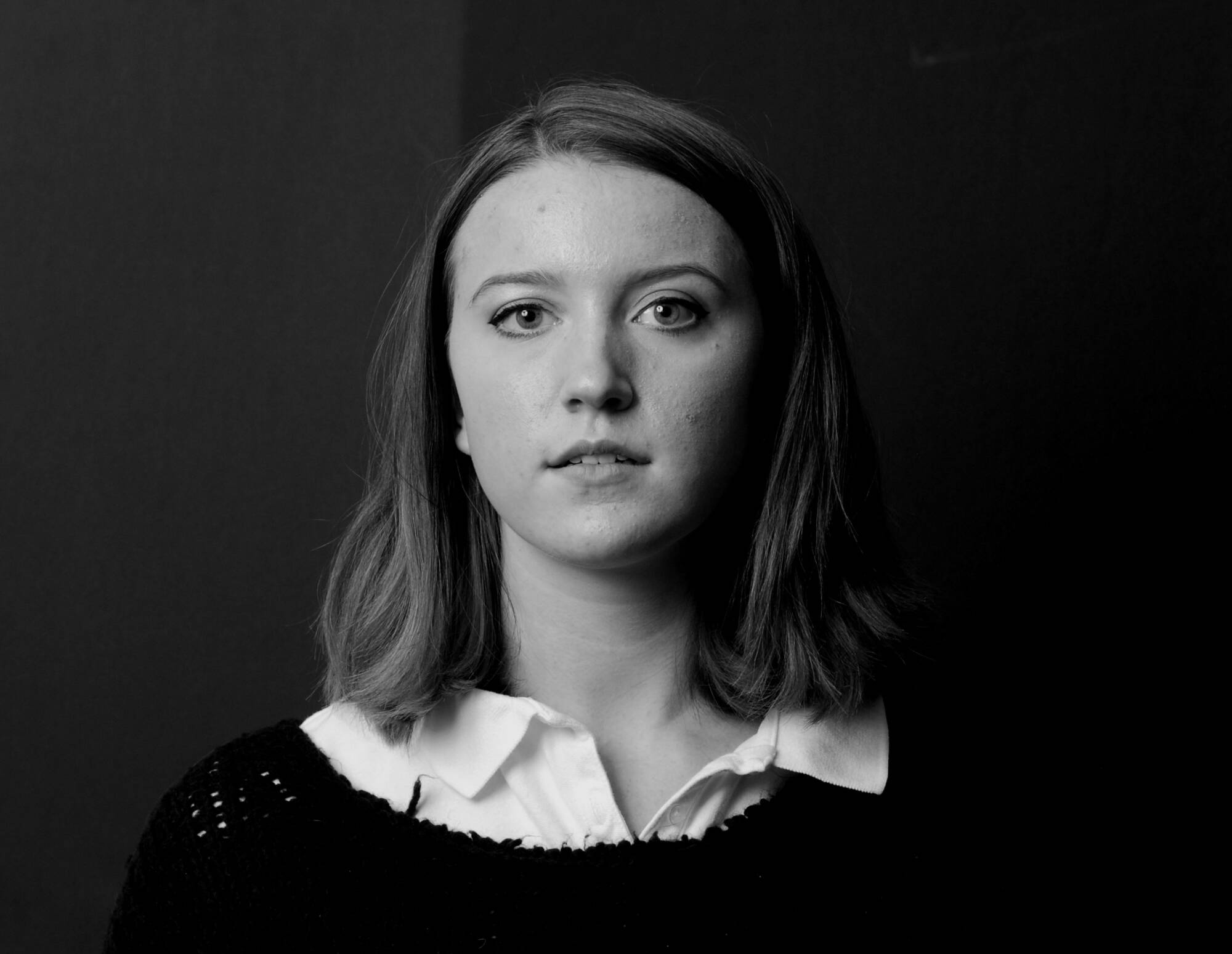 Hi Audrey, it’s so lovely to speak with you! Before we begin, I wanted to let you know that I loved your recent poem in Blue Marble Review, ‘Contrapposto’. Could you let us know the inspiration behind it?

Hi Richa! I’m so excited to speak with you as well! Thank you for reading (and loving) what I’ve been calling my “art history poem” – I wrote ‘Contrapposto’ after a trip to the Philadelphia Museum of Art back in January 2017. I’m lucky enough to live right outside of Philadelphia, which is such a culturally and artistically rich city. The poem is specifically based around the pieces “Contrapposto Studies, I through VII” by Bruce Nauman, which is a projection series Nauman created around the definition of “Contrapposto” in art: “an asymmetrical arrangement of the human figure in which the line of the arms and shoulders contrasts with while balancing those of the hips and legs.” I’m going to do a horrible job explaining this abstract art piece, but you can read about it here and watch the projection here.

I decided to write the poem as the figure walking in “Contrapposto Studies, I through VII.” However, I still tied in imagery as if I was the figure itself, and what my emotions would be. Another huge influence the poem was the sound of the projection piece – there was white noise playing throughout the gallery to accompany the projection.

Could you tell us more about your background as a poet and writer? So far, what has been the most rewarding part of your writing career?

I’ve been writing forever – it’s always what I’ve wanted to do with my life. I’m pretty sure my mom is convinced I’m currently going through a “poetry phase,” and have been for the past few years, but I honestly love writing poetry! It provides an abstract, yet concise, format to discuss topics that may not get picked up on as metaphorically in fiction or nonfiction, specifically emotions. Most of my work draws from personal experience intertwined with outside inspiration: a song, phrase, person, or almost anything that catches my eye. I’m a very creative person and writing has always given me an outlet for that creativity.

Your intriguing poem ‘contra / quia / femina’ was picked up by Teen Vogue (!!!) as part of their article on sisterhood. It’s such a stunning poem, and it would be wonderful if you could tell us the writing process behind it.

Sure! When I read Rhiannon McGavin’s poem “Things that Could Happen to a Girl Wearing Jeans,” which was published in the magazine, Teen Vogue had announced another writing contest and I was completely inspired. The poem primarily focuses on wanting to have a “clique” or “friend group,” and not having one. Sisterhood comes in many shape and forms; I wrote this poem for girls who specifically felt, much like me through high school, that they didn’t have that connection. The title, “contra / quia / femina” literally translates from Latin into “against / for / girls.” I wanted the poem to be not shaming or hating on girls with cliques and friend groups, but instead expressing what it’s like to be without one. I’m such a prose person as well, so I decided to write it in prose format instead of a traditional line-broken poem.

Your article in The Mighty discussed applying to colleges while living with bipolar disorder type II. Did you encounter any other challenges (related to mental health) while navigating the last year of high school?

Thankfully, my last year of high school was easier than past years to manage in terms of mental illness. This isn’t saying that it went without fault though: I gave a speech at my school about my mental illnesses back in November, and while almost everyone who I talked to gave me positive feedback on it, there were several people using derogatory comments about people with mental illnesses in the following days. Unfortunately, this is to be expected, but I’m working towards making it so that stigma is not to be expected – it shouldn’t be tolerated.

In a previous conversation, you told me that bipolar disorder is seen as less ‘acceptable’ to society than anxiety and depression. Could you elaborate a bit more on that?

Absolutely. Prior to my sophomore year of high school when I was diagnosed as bipolar II, I had been diagnosed with anxiety and depression. I grew up always thinking “there’s something wrong with me” and feeling at fault about my mental illnesses – but it’s not my fault. This is a lesson that took me years to learn. I went through friendships and relationships without revealing my mental illnesses to anyone, and after an especially rough sophomore year, I discussed what it was like to live with my mental illness in a Facebook post on a page run through my school. I received an enormous amount of positive feedback from the post – however, I felt that if people knew the specifics of what I had gone through, they would be as scared as I was in those situations. It took me a while to fully open up about my diagnosis and experiences with therapy, medication, hospitalization, and more.

Bipolar disorder isn’t as common as anxiety or depression, and there’s a lot of stereotyping and misconceptions about it. I didn’t even truly know what bipolar disorder was until I had it; bipolar is characterized by having “polar” moods, shifting from manic to depressed. Anxiety and depression are unfortunately heavily romanticized, which leads them to be seen as more “acceptable” disorders – disorders that aren’t as “serious” or “scary.” But, they really are just as real and scary as any other mental illness! I think that bipolar, because of the stereotyping and misconceptions, is definitely seen as a “scary,” “serious,” “dangerous” disorder, while anxiety and depression can be seen as less so. What it boils down to is that they’re all mental illnesses that are experienced differently from person to person. Judging a person based on how “sick” they are, or based on their disorders is an unhealthy, discriminatory practice.

Do you identify yourself as a mental health activist? Could you tell us more about your experiences with reducing stigma?

One of the things I try to do in reducing stigma is getting people to pay attention to the language they use relating to mental illnesses. It may seem small, but phrases and words can hurt, trigger, and do more damage than anticipated. You never know who’s struggling with what. Besides, using a rhetoric that stereotypes mental illnesses – calling people “crazy,” “psycho,” “insane,” and more of the like – only increases stigma by correlating mental illness to evil. While mental illness isn’t good by any means, people living with it shouldn’t have to be seen as bad, evil people based off of generalizations.

Would you have any advice for youngsters with mental illnesses currently facing stigma or discrimination?

I’m horrible with advice, really – I like to say I’m an excellent listener, but I’m definitely not a qualified advice-giver. That being said, there are people who are highly qualified advice-givers, and my best advice is to reach out to them. Adults, psychologists, and counselors will be able to listen to what you’re going through and connect you with the right people who can benefit and help you the most. My parents were really confused and frustrated with my mental illness when I was younger, so I rarely went directly to them – instead, I would talk to a teacher, coach, or other trusted adult who could pass on my problem.

Also, if you’re currently facing stigma or discrimination, my best advice is to be the bigger person. Educate yourself on mental illnesses, stigma, and how they present themselves. Communication is the best strategy to get people to listen. If you’re being bullied about your mental illness, go to an adult – and if an employer, school, or other institution is discriminating against you based on your mental illness, you are protected by certain laws. NAMI (the National Alliance on Mental Illness) and MHA (Mental Health America) provide resources if you are being discriminated against.

What book are you reading right now? What do you believe makes a poem memorable?

So I always read about three books at one time and cycle between them. Currently sitting in my backpack are Makeshift Cathedral by Peter LaBerge, Together and by Ourselves by Alex Dimitrov, and Floating, Brilliant, Gone by Franny Choi. I’ve had the amazing opportunities to connect with all of these poets in the past and they’re truly some of the most brilliant young voices in poetry today. A memorable poem to me is one that gets you thinking about your own life – whether it’s an image, a line, or the poem as a whole. Being able to connect something to yourself makes a poem all the more personal and memorable.

What does poetry mean to you? Could you share with us a poem you hold closest to your heart?

To me, poetry gives voices to express emotions and situations that cannot explicitly be said through fiction or nonfiction. Poetry is a much more feelings-based art form. As a person who lives with mental illness, being able to talk about these feelings through poetry is extremely cathartic and has been essential to my recovery.

I have consistently been in love with the poem “Bringing my Son to the Police Station to be Fingerprinted” by Shoshauna Shy. I found it in Poetry 180, an anthology compiled by Billy Collins that was gifted to me. It’s a beautiful study in imagery: my favorite lines close with “it’s reassuring to note /
how the yellows momentarily mesh / and make an overall pleasing / composite.”

Lastly, what are your plans for this summer? Where do you see yourself in ten years?

This summer I am fortunate to be attending the Iowa Young Writers’ Studio at the University of Iowa! I’m extremely excited. I’ll also be travelling to Italy, North Carolina, and Massachusetts with my family, and will be working the classic teen summer retail job. I just finished up my internship at Apiary Magazine, which is a Philadelphia-based literary magazine, to kick off my summer.

Frankly, I have no idea where I’ll be in ten years – possibly finished or finishing up an MFA program, possibly living in my dream house in Park City, Utah, possibly working a desk job! No matter what I’m doing, I’ll always be writing, and hopefully will be able to integrate that into my job (if it’s not my job already) and daily life. 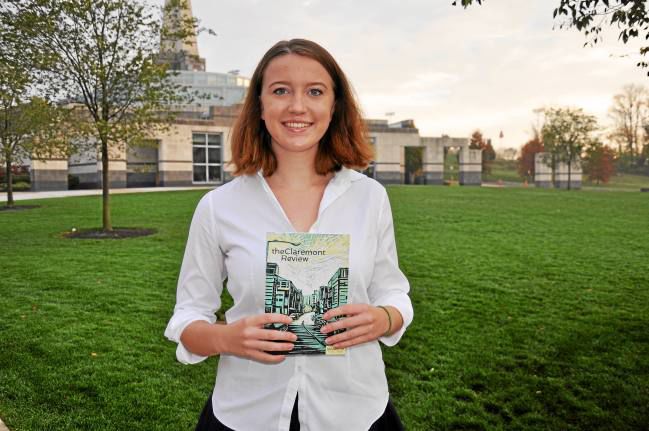 Audrey Lee is an incoming freshman at Franklin and Marshall College. You can read more about her and her work at http://audreymorganlee.weebly.com/

Richa Gupta is an Editor of The Ramona Collective at Ramona Magazine for Girls, and a teen poet and blogger. She is the founder and editor-in-chief of Moledro Magazine, an international literary magazine. Her poetry and essays have appeared in Literary Orphans, The Missing Slate, New Plains Review, and Poetry Quarterly, among others. She is a blog contributor with The Huffington Post and a youth blogger with Voices of Youth. Richa was born in 1999 and resides in Bangalore, India.