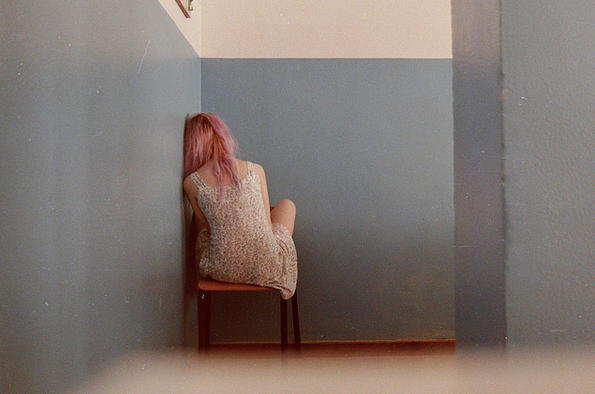 “Not all men are that way!”

to my two tired ears.

I’m yet another Tumblr feminist,

indulging in my victimisation

and delving in my most favourite pastime-

The words bounce off my skull as I dare to take a stroll down my memory lane.

Another day of April.

I stood clenching my boyfriend’s shirt with all my might

-struggling to hold on, for it was half past midnight-

as he called me a bitch and kicked me right outside.

My voice cracked as it reached its peak,

just as the teakwood door slammed shut in farewell.

I only heard a distant retort as his footsteps retreated away from my pleas.

The tyrannical triplet echoes within my grey.

as I stood downstairs facing the deserted streets, graced only by elements I’d rather leave unnamed.

I prayed for the damp walls to consume me to safety as I slinked forward,

preferring an abrupt death instead of what his inebriated mind wanted to subject me to.

He staggered closer and closer

-exuding the stench of unwashed clothes and cheap alcohol-

as I stood rooted that eerie night with my bare thighs not helping the matter and my limp limbs too frozen to fight.

It all seemed to take place in a flash excruciatingly slow

before my legs finally found the sense to go make a run for it.

I tried keeping my pleasant disposition up

but the giant bite mark right below my chin

and the crescent-shaped claw impressions encircling my neck

said much more than my words ever could.

Mainstream media tells me it wasn’t my fault

and the college counsellor confirms as well

but I have pledged never to go out after nine for a long time now.

That might make me a coward but at least, it wouldn’t make me dead.

as I recollect the second half of twelfth grade.

He was older than my father

and he stalked me for six whole months

-from the driver to my Principal-

simply assumed that by wearing a skirt with a hem resting above my knees,

I was somehow asking for the unsolicited attention.

I recollect the sprint I used to undertake every single day,

desperate to reach the confines of my car without getting groped on the way.

because he respected his gender much more than he could ever respect my consent.

I recollect my best friend, shrugging his shoulders

and pointing out indifferently,

The words pelt at my flesh,

turning it into angry red welts,

as his bitterness rings in my ears after about three long years.

We had just broken up:

I was home alone,

sunk on the stone floor, crying into my dog’s fur

as he shouted over the phone.

fell from his mouth in a free flow

as my stoic facade

collapsed further with every single blow.

You keep repeating and I agree.

-no, those savages are probably only a few-

but even if not every single one of you

enough of you are

for it to be an issue.

Manasvi is a mass communication student who reads, writes and pets cats for a living. Planning to pursue a career in filmmaking, she’s currently working on her debut short film. She likes pandas, Sylvia Plath and chocolate. You can follow her at @theinfatuatedpanda.

Chiara, 18, is an Italian girl and photography is her passion. Seeing the world through her lens is what makes her live, and not just survive. In every photo you can find a piece of Chiara. Take a look at her Facebook page.