Book review by Hannah Forsdike // Many may not consider this novel a feminist text, because at face value it does not promote gender equality. However, in a way it suggests that men and women are equal in their capability for violence, and that violence is the direct result of power. 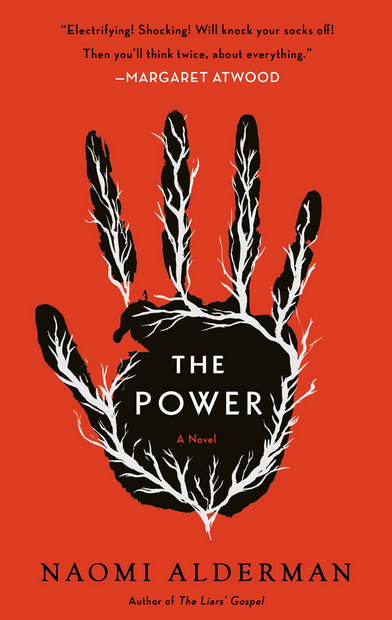 Naomi Alderman’s fictional novel ‘The Power’ is a different kind of feminist text, it dissects the gender power balance, inequality and questions whether power is synonymous with violence. Alderman was actually mentored by Margaret Atwood, so if you were a fan of The Handmaidens Tale, you might enjoy this book too.
The novel is framed with a conversation between two writers. It begins as an email correspondence set in the distant future, a future in which the world is a much different place to the one we know, this is evident in these emails. One of the writers is asking the other to read over their new novel, a fictitious retelling of historical events. This takes us to the story. The novel itself is set in the present day, or a near future, where women and girls uncover a latent ability allowing them to generate an electric charge from their hands. This ability largely shifts gender power dynamics, as women are now able to harm or even kill men with the touch of a finger. Children, teenaged girls and young adults are the first to discover the power and are able to wake it up in older women. Baby girls are now all born with the ability, and it’s presence quickly becomes the ‘new reality’.
The story follows how this development or ‘new reality’ would unfold in the world today. In this reality the tables are turned. The power, strength and capability for violence often stereotypically associated with masculinity, is now available to women. And rather than a power balance between the two genders, the power is completely shifted onto women, with the ability to cause serious damage at their fingertips.

Alderman explores this shift in power and it’s effect on politics, gender roles, family dynamics and patriarchal religion. New religions and political regimes are established. Women, furious from years of inequality, rise up to violently over throw their male oppressors. There are women exploiting their power for selfish gain, and others who don’t want the power at all. We also see groups of men calling for ‘male justice’, conspiring to overthrow the women and restore the ‘natural order’.

We see the story through the eyes of four main characters; three women and a man. The main piece of criticism I’ve seen this book receive is that the characters are pretty two dimensional; they aren’t fleshed out characters, rather story telling vehicles. Because the novel spans over about 10 years pretty quickly, there isn’t much room for character development. Although character development is usually my favourite element of any piece of fiction, I’m willing to forgive it in this instance because there is so much else to take in.

I found this book really easy to read, although it isn’t defined as such, I’d compare it to YA fiction in readability. So if you aren’t much of a reader, or you tend to shy away from heavy and lengthy novels, I’m sure you’ll still be able to
enjoy this book.

Many may not consider this novel a feminist text, because at face value it does not promote gender equality. However, in a way it suggests that men and women are equal in their capability for violence, and that violence is the direct result of power. Men are associated with violence because throughout history they have held all the power; perhaps if it had been the other way around the gender roles we know today would be very different. Above all, this novel tells me that whoever holds the power is likely to abuse it sooner or later. Naomi Alderman’s ‘The Power’ made me wonder what I’d do with such a dangerous ability.