I Am Not My Scars

Writing by Pepsi Cocaine // Photograph of Pepsi by Álex Pérez // CW: self harm, scars, mental health and sexual abuse // Very few people talk about mental illness, and when you can see it on someone’s skin, they don’t know what to do or say. Some people get angry, some people completely ignore it but occasionally glimpse at them when they think I’m not looking.

Writing by Pepsi Cocaine // Photograph of Pepsi by Álex Pérez 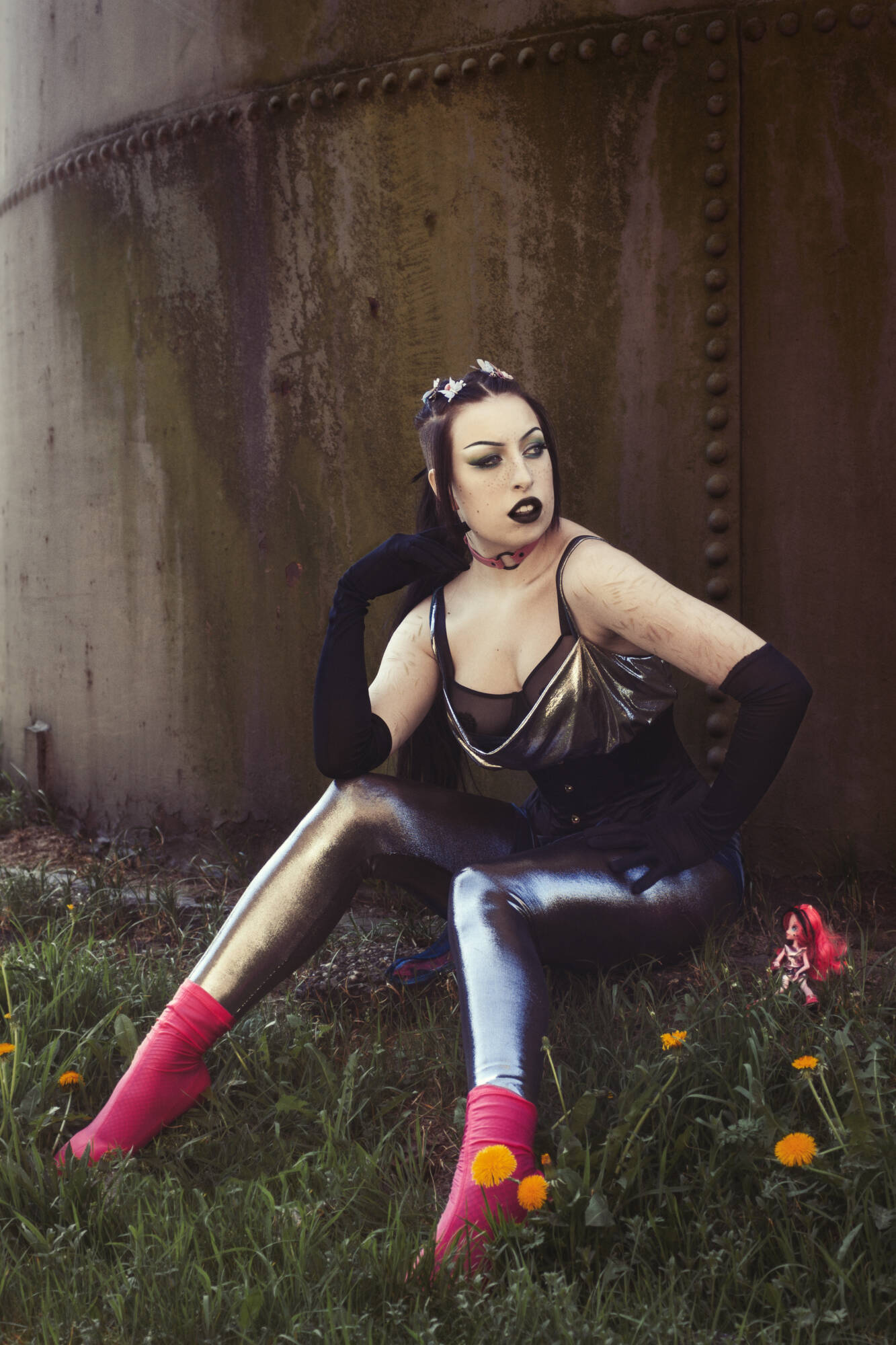 If you have a lot of self-harm scars, people think it’s an invitation to tell you their rude opinions about how you look. “That will be on your skin forever, you know that right? What about your wedding? Now you can never wear short sleeves again”. First of all, yes I know, and second; is that really the first thing you think about when you see a teenager with fresh scars on their arms?

Hi. My name is Luca, but I’m also known as Pepsi Cocaine, because I’m a model and performer. Yes, I’m a model, and I have a lot of self-harm scars. People with scars in general often think something is wrong with them, I mean, skin is supposed to be flawless and smooth, especially as a woman. If body hair is already considered gross, a bunch of scar-tissue is a no-go. And if you “mutilated” your body yourself, people start to flip out. Often not even because they are concerned for WHY you’re doing it/did it, but about how it LOOKS. Because aesthetics are obviously more important than mental health *sarcasm*.

When I was 13 years old, two older boys sexually abused me. They decided it would be a good idea to take advantage of a naive child and they violated my body. I knew what sex was, but I didn’t really know what the hell just happened, all I knew was that it hurt, and that I would never feel the same again. I didn’t tell anyone. At the same time I was also bullied in school. I was a strange kid, I was never really there, always drifting off in a fantasy world in my mind. When I was 14 I met another girl who was also a little bit weird like me and we became friends. And then she told me. She was depressed and she cut herself. “WHAT?!” was my first thought. I did not understand at all why someone would intentionally hurt themselves. There’s just no point. But like a lot of 14 year olds, I was also very curious and yes, I thought it was kind of edgy. So I tried it. And weirdly, it felt good. My mind was always so damn busy, there were all these memories stored in there that I was trying so hard to repress, and when that razorblade hit my skin it was so quiet. All the voices shut up, finally.

Self-harm is a weird thing. It makes you feel better for a while, but then afterwards you are flushed with guilt and shame and you feel terrible. And because you feel so bad about yourself you want to do it again. And again. After a while I wasn’t even doing it to feel better anymore, I just missed the feeling. It can really turn into an addiction. I tried quitting multiple times but I didn’t really *want* to stop. My therapist told me to stop, so I did, but I would start again soon after. I didn’t really care honestly, and I didn’t really know why other people cared so much. Why can’t they just leave me alone, if it makes me feel better? When I was 18 years old I finally understood that it does NOT make me feel better. And I quit. And I haven’t done it since.

I knew what my body looked like of course. At first I was really careful about where I did it because I didn’t want people to find out. So I only did it on my hips, where my underwear would cover it. Or my wrists, where I could just put a bunch of bracelets on top. But when you reach that point where everyone around you knows about it, you don’t really care about where you do it. ‘Just one more won’t make a big difference, there’s scars everywhere anyways’. One day I looked in the mirror after taking a shower and I was like “oh”. My entire left arm was covered in scars, my hips and thighs were covered in pink and white lines and I felt hideous. When you are doing it, you are just adding them one by one so it grows very gradually, so you get used to what you look like. But you don’t realize that together, it’s a mess.

For a while I wore long sleeves and I strayed away from shorts and shorter skirts. Just the thought of people seeing what I had done to myself frightened and embarrassed me. Around the same time I was getting to know the kink community, I had gone to one or two kink parties and I found out that people are very open minded there and they wouldn’t care. And then a woman I’d met at a festival asked me if I could model for her. She was a VJ and she played at a fetish rave. I said yes, and she filmed me, dancing around in sparse clothing with masks and leather harnesses and such. And I showed my scars. When I went to the party, and I saw myself on the big screen behind the DJ booth, I was in awe. That was ME! And people complimented me, they called me sexy and beautiful, and they didn’t even mention my scars. They saw me for me.

At that party I met another photographer. He wanted to take pictures of me, with the scars as the main focus. I didn’t really get why, he was a little bit of an eccentric artist guy so he wasn’t very clear but I figured, I felt safe, why not? The pictures were beautiful. So I posted them on my blog. I got a lot of attention because of it. People were shocked by my scars, and also because I was topless so that was also a big deal for some people. But I also got a lot of positive replies. People applauded my bravery for sharing a part of myself that was deemed so taboo.

Very few people talk about mental illness, and when you can see it on someone’s skin, they don’t know what to do or say. Some people get angry, some people completely ignore it but occasionally glimpse at them when they think I’m not looking. I understand it’s a bit shocking for people. That doesn’t mean it’s okay to harass someone over it of course. I found out that I quite liked modeling so I created a portfolio on websites for models and photographers. At first I just did shoots for free, to fill my portfolio with good work and so I would get the hang of modeling in general. And then the paid jobs came in. I didn’t really have to do much, just keep my pages and social media updated, and somehow artists and photographers just found me. You see, the photography world is over saturated with the same kind of models. I’m not saying there’s anything wrong with them, but a lot of artists are looking for more unusual subjects, they actually want flaws and uniqueness. Because seeing the same kind of manufactured perfection over and over can be boring.

I’m not perfect. I don’t have the typical fashion model size, I have a unique face and yes, I have scars all over my body. But that doesn’t mean I’m not beautiful! I will never be a Victoria’s Secret angel. And I don’t want to be. I don’t want to be part of a brand which only showcases one type of beauty because I feel like we’ve already seen enough of it. I think beauty should be defined by the individual it’s about, it’s different for everyone. You can’t just pinpoint everything that’s beautiful or ugly, it’s fluid. I am a strong believer of enforced diversity within the modeling scene and I don’t think it’s okay that the only girl you ever see is thin and blonde.

I’m a firm believer that even the hard subjects should be talked about, in order to take away the shame and guilt which are seamlessly intertwined with mental health issues. If you are more open about it, it will welcome people to speak up, to seek help. And above all, I think seeing a vast range of models and just people in general rocking their battlescars without shame, shows people that it’s not the end of the world. It’s okay to be “flawed”. You might not look like the models in vogue, but you are still beautiful.