Writing by Ferris Knight // Illustration by Andra Badea // Bipolar is often described as happy and sad, but to an extreme. I personally think of it as technicolour explosion versus a monochrome implosion. There is nothing happy about mania and nothing as simple as sadness when it comes to depression. 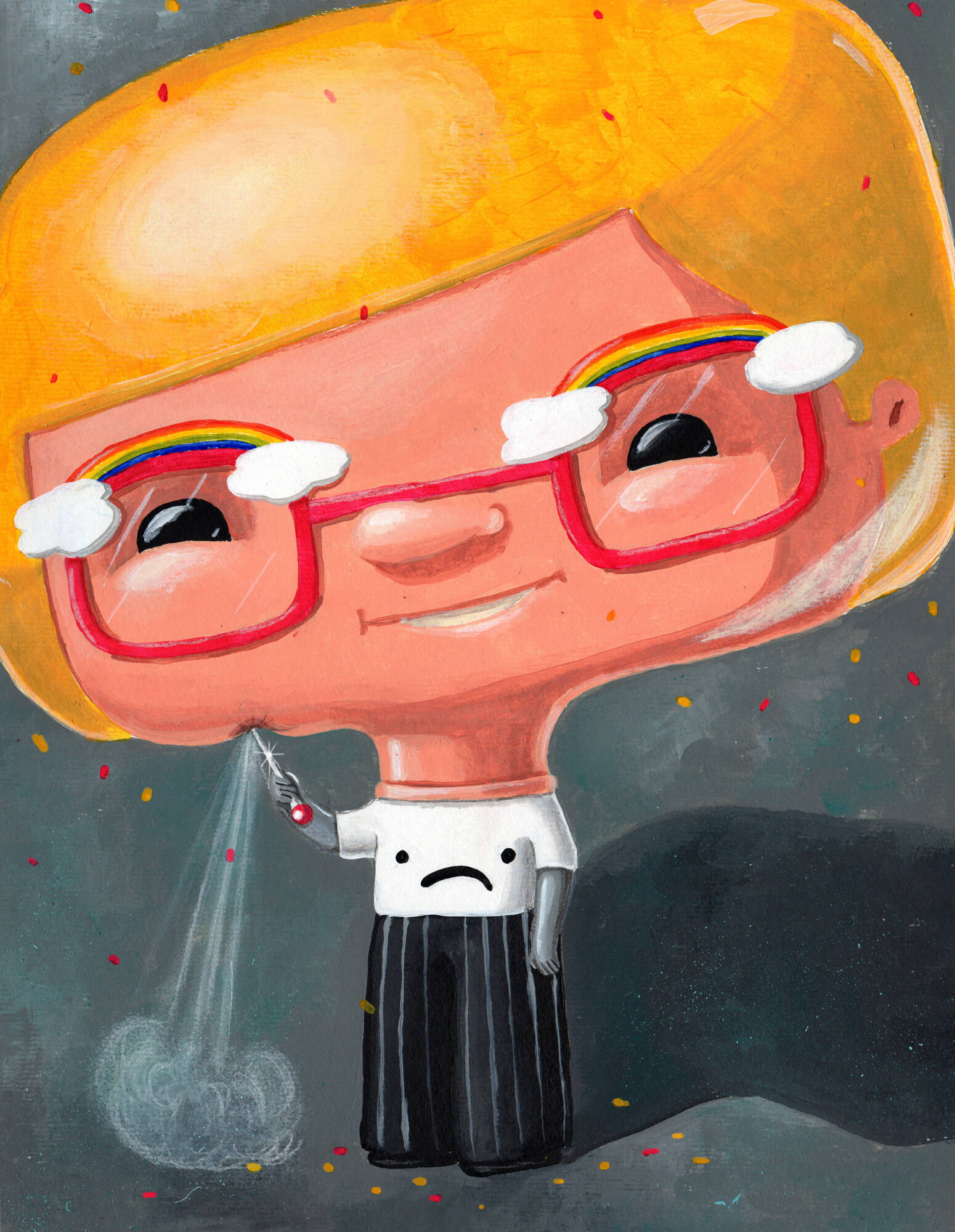 It’s been eight years since I was first diagnosed with bipolar. That’s scary to think in some ways. It simultaneously doesn’t feel that long ago while also feeling like it’s been a known fact since birth. It’s like I was built for a world that isn’t the same as the one I’m told about but, rather, I’m a passing visitor in sanity rather than a resident.

I’ve been open about my condition for a number of years with nearly everyone in my life – safer to tell them than have them find out the hard way. I’ve been lucky enough to mostly find support amongst friends, but it’s a different world online – people say it’s an excuse for bad behaviour; just ‘moodiness’; a millennial’s inability to cope without pathologizing; or using it as an inappropriate adjective for the weather (if they’re going to be accurate, it would be ultradian cycling bipolar, or closer to the mood shifts associated with borderline personality disorder, at least here in Melbourne anyway). But it’s never been an excuse, it’s an explanation – if I say I need to sleep you need to let me sleep, now.

At times I’d be too wired and friends would encourage me to take my medication and sleep it off. The depression I hid until I couldn’t, trying to appear fine and retreating into myself where possible on a good day. Until, finally, I took the plunge last year to go into hospital and be open about needing that level of help.

After being in hospital I was taking my meds religiously. They tasted absolutely awful because instead of regular pills, I needed to take an oral compound through a syringe. This is because the fact that I couldn’t always swallow properly was finally recognised and it wasn’t worth skipping a dose because my throat was having a bad day.

After doing twenty rounds of Electroconvulsive Therapy last year I decided to just try medication alone. I was scared of the anaesthetic wearing off during the procedure and I couldn’t go through that again (yes, I am an absurd combination of medical fuckups).

For years I’d struggled, taking PRNs when I was up and suffering through it when I was down. Now though, I was on a plan. In the past I would have taken extra medication if I’d started to get the early symptoms I did. Not sleeping, not needing sleep, feeling an anger so foreign and physical that I struggled to contain it.

By the time my speech had become rapid enough to draw questions from my parents who have seen this all before, the delusions had started – a voice called ‘the earworm’ convincing me that I wasn’t sick because, if I really was, wouldn’t the medication work? When asked, I was honest that I had now stopped my medication (on the advice of ‘the earworm’, which I didn’t share) but unless the right question was asked, I was evasive. I hate lying but I couldn’t trust anyone. They were after me because I was special. I could see. Even in my mind that word was in italics, floating and surrounded by a shimmer.

On one hand, I felt fantastic. Like cocaine on a chocolate sundae, during sex, surrounded by kittens, while seeing God. It was beyond anything as petty as happy or good or confident or high. Beyond grandiose. My head started to hurt being around other people or even the television from how slowly it was going – it literally sounded like everyone was underwater. Words glistened. I bought books upon books I couldn’t concentrate long enough to read as well as miscellaneous things like 400 rubber ducks (fortunately I got a refund on those later as they got stopped by customs for being ‘suspicious’). The TV sent me messages that I would write down and stick on my walls in coded colours. I could see colours beyond the spectrum, other dimensions. I wrote until I needed an x-ray on my wrists to check they weren’t broken, tried to join the army and worked out a plan to become a YouTube sensation. I was ‘the chosen’ one. By whom, I still can’t make sense of that. The delusions themselves were scattered, with key pieces missing that might begin to make some sort of story out of it. There was an organisation after me because I was special and I had to be careful and complete my duty before they caught me. Everyone I knew were spies for them, either intentionally or unintentionally due to how ingrained this organisation was. But I was going to beat them.

The signs make no sense now, but at the time it was clear as day. They sent me on a mission to attempt to walk across two states to find a way to save the world. When I was found one state over in Adelaide I was a missing person and hiding from “the organisation” with out of character clothes and a long, silver wig. I still don’t know what the missing person’s report said, but somewhere along the line I was thought of as depressed instead of manic, and was being tested for an overdose whilst falling over attempting handstands in the hospital cubicle.

All the while I was trapped in racing thoughts. I wonder if squirrels and possums are related I hate possums they’re scary but apparently you can go and feed them I wonder if they’re endangered OMG there are so many endangered animals in Australia I’m going to save them all I’ve never heard of most of these I’m going to get a Nobel prize for saving all the animals they’re so cute I love my cat he is adorable how cute would he look dressed as Pikachu I’m going to buy him a Pikachu onesie oh and I can match with a hat I’m going to buy that too.

For every moment of every day, my thoughts were jumping around from topic to topic almost without relation and between the fear of being hurt by this imaginary organisation and not being able to focus on a single thing long enough to act. The worse symptom though, especially for those around me, was that I didn’t think I was unwell – despite having this diagnosis for years, having long accepted it as something I’m going to have to deal with, I thought I was anything but bipolar.

There’s a quote from Legion about schizophrenia but I think suits bipolar as well:

“The most dangerous thing is believing you don’t have it. That’s the trick. The mind killer. Your disease convinces you, you don’t have it… And more than anything, you wanna believe it because that means you’re not crazy. It means you can fall in love and live happily ever after. But you know if you believe it if you surrender to the hope and you’re wrong, then you’re never coming back”.

Right now I know I’m in for a world of hell as manic episodes usually precede depressive episodes and if a three week manic episode left me with eighteen months of depression I’m scared to think what four months of mania is going to turn into.

Bipolar is often described as happy and sad, but to an extreme. I personally think of it as technicolour explosion versus a monochrome implosion. There is nothing happy about mania and nothing as simple as sadness when it comes to depression. The medications I’m trying now still doesn’t make me ‘well’,  it just dials it down to hypomania instead. Just well enough to know now that I’m sick. I still feel like a disaster waiting to happen, still too scared to go back to my life in case I further damage it.

And yet some still see this illness as a joke or excuse. The suicide rate is 30 times higher than the general population and life expectancy is reduced between nine and twenty years. Some studies even show that mania may cause brain damage. Bipolar is more than just being really happy and really sad, rather it is a serious condition, but one that many can manage, at least in time and with the right supports. I hope one day to be one of those people, but in the meantime I’ll continue to raise awareness to at least hopefully get rid of the awful weather ‘jokes’.