MY RECORD COLLECTION: Kira Puru’s records for friendships, break-ups and moments in time 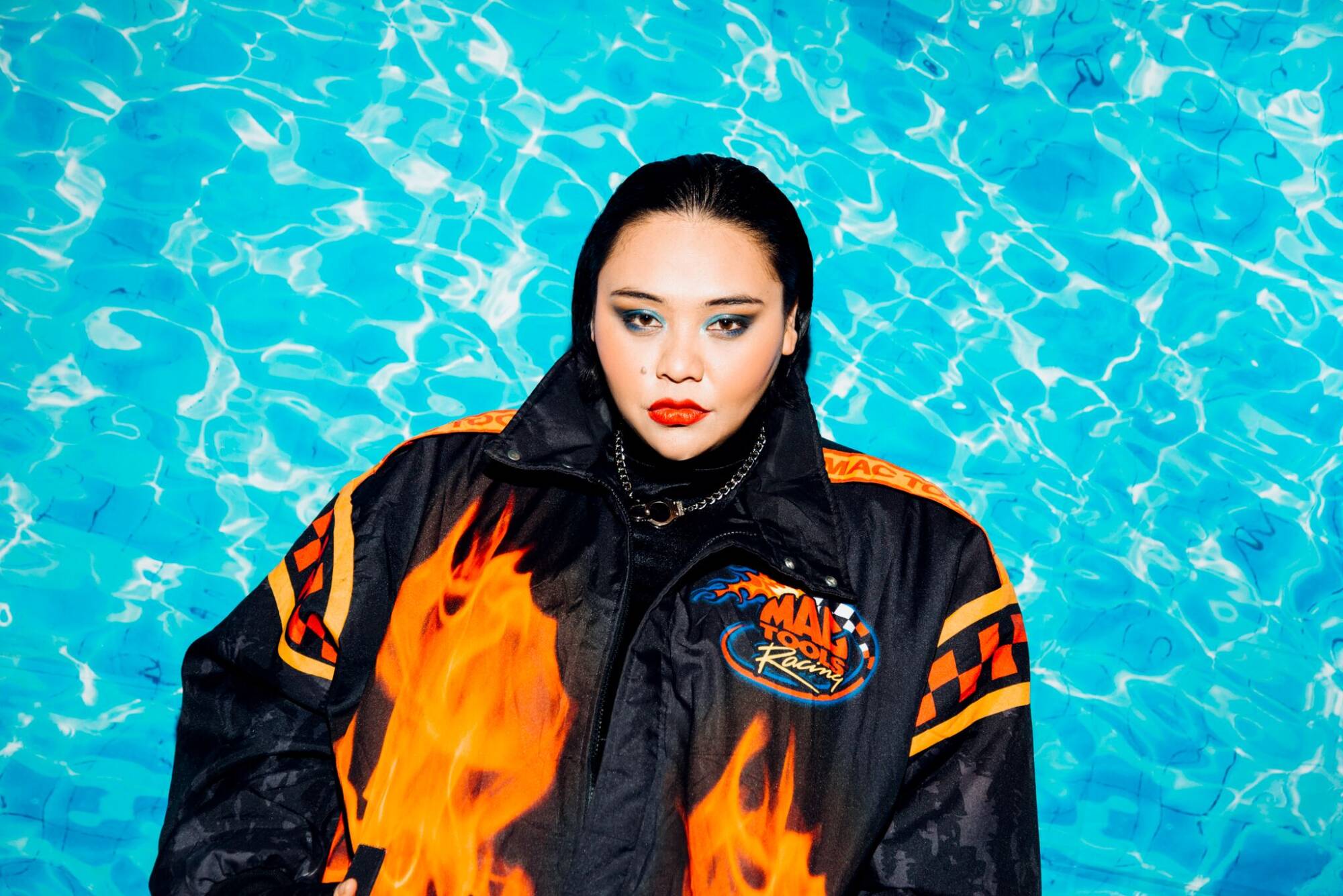 Total babe Kira Puru has just released her new single, the cracking Fly, from her self-titled EP, and will be on an Australia wide headline tour this November and December – as well as performing at Canberra’s Spilt Milk festival in November (headlined by Childish Gambino himself!). In the past few years, Kira has collaborated with Paul Kelly, Illy and Urthboy. She grew up in a small town in NSW and has since made the move to Melbourne to pursue music. She is a super vocal feminist and queer PoC – and uses her musical platform to talk about the hard stuff. An insta stalk of this babe reveals a political consciousness as well as eclectic aesthetics and v. good insta stories.  We were lucky enough to take a journey into her record collection, learning about the tracks that have shaped her friendships, break-ups, and musical moments in time.

Originally, I wanted to choose Joan As Policewoman for the song ‘To Be Lonely’ on her 2008 record ‘To Survive’. But alongside Real Life it doesn’t seem fair.

Joan came in to my life while I was living in my first sharehouse in Newcastle. A girl I met in the local party set, Helena, who now is one of my most treasured friends as well as my trusted and talented make-up artist, lived two blocks away and we used to while away summer evenings drinking red wine in her backyard, smoking cigarettes, listening to Joan and talking philosophy and boys. Funnily enough, we listened to her a lot at parties which I guess says something cute about the “parties” we had at the time.

I met Helena at a bar one night, we hit it off and she invited me to her house to indulge in her latest cocktail invention, ‘The Bloody Period’. From memory it was some sort of red liqueur and white wine. It made me laugh so hard I just had to make her my friend.  She’s one of the most intelligent, incredible, fierce, unapologetic feminists I know. She convinced me I was a fierce feminist and encouraged me to explore and express that, so I guess you can indirectly blame her for like…my whole twitter feed 😉

I met Joan once after a show. It was in a crowded room and I remember her staring at me. I was nervous but anxious to speak to her, and she ended up passing a few people to come over and compliment me on my outfit. RIP me.

This album taught me a lot about being raw, emotional and honest but remaining strong and fiercely, unapologetically yourself. And let’s not forget the Anohni duet <3

Many of my friends rib me for how much I stan Kanye.

I get it. I flip flop on Kanye all the time. I see he’s problematic, but I also truly believe he’s an amazing lyricist, excellent producer and an interesting, provocative, engaging character, businessman and artist. I wonder a lot about how much you can separate an artist from their art and how the value and context of that art is impacted by the artist themselves. I don’t think I’ve come to any concrete conclusions yet but I enjoy the discussion.

This album landed in my lap when my old band was on it’s longest ever tour by car. It was roughly a two month stint. Four of us, in a car, for two months. We clocked a casual 100,000kms on our Commodore station wagon and traversed desserts and cities alike. Our tour energetically culminated in Broken Hill. I have a friend who owns the iconic Palace Hotel there. It’s known for it’s incredible murals and hand printed wallpaper that stretches across almost every wall in the communal areas and of course, for it’s appearance in Priscilla Queen of the Desert. We thought we might as well use the opportunity to film a music video while we were out there and thus, we brought our friend Si along. At the time, he was a writer and budding filmmaker but he later came to manage our friends, Hiatus Kaiyote and start the label Wondercore Island. We ended up making that clip but it never saw the light of day.

Our aux cord was broken and we were relying on cds. Si bought this record as a gift for the band at a servo in Mildura and it quickly became the soundtrack to the tour…and the year. Even now when I listen to it I see endless sprawling desert scenes whizzing by a back seat window in my mind. Highlights include but are not limited to: Nicki’s verse on Monster(OBVIOUSLY), Gil Scott Heron on Who Will Survive in America, and the vocoder solo ~ but also everything ~ in Runaway.

Firstly, I know this is not the best Elliott Smith album. Tbh, it might even be my least favourite.

I was first shown this record by a boy I had a crush on. He played me a few songs from it and when I said I didn’t really like them, he told me that Elliott was an artist I really had to hang out with to understand. At the time, I thought that seemed like such a contrived thing to say but talking to you now, as a big time Elliott fan, I understand it.

Eventually our weird pseudo relationship went sour and I took to listening to this album on repeat. It seemed both romantic and spiteful at the time. Before long it became one of my favourite records and Elliott Smith one of my favourite artists. Looking back, I think it was a big turning point for my writing. I was spending time trying to find complicated, cryptic ways of talking about my feelings  and it was essentially this record that taught me that this type of fragile, earnest authenticity can be both powerful and and gentle at the same time.

Everything Reminds Me of Her, followed by Everything Means Nothing to Me is both the best and worst thing to do to yourself in a breakup.

There was a time when I couldn’t stop listening to the Dirty Three. Being a writer, I was very lyric-focused, I would end up dismantling songs and unpacking lyrics when listening and I felt liberated from that when listening to instrumental tracks. I think this is something lots of songwriters experience. Bands like Dirty Three, Talk Talk, Swans and My Disco really allowed me to disconnect from music as a maker and engage as a listener, which was imperative when touring because you need to find a way to shut off.

Ocean Songs reminds me of a particularly gruelling tour with lots of driving. I found myself unable to sleep due to anxiety and I used to listen to this album to try and meditate and sleep. When that period was finally over, I couldn’t listen to the first 3 songs on the record without feeling sleepy.

I don’t know how to really speak about Warren Ellis’ work without sounding like a silly little fangirl. Maybe that’s what I am. His lines are like a wild horse. They’re so lyrical, majestic and powerful but so untamed and free. Listening to this record or any Dirty Three or anything with Warren on it for that matter feels like getting a really vigorous, firm massage, but of your brain.

When I broke up with my first girlfriend, one of my first great loves, we made each other break-up mixtapes. I don’t know whose idea it was and why on earth we decided to do it. It was not a good break up, in fact, it was very painful and messy but four songs appeared on both mix tapes. One of them was Sea Above, Sky Below.

I am allllllllll about Bruno Mars.

I admire this record as a listener and as a musician in equal parts. You can hear his sharp writing skills in every line, each track, so economic, smart and precise. It’s really, really good pop music. I’m drawn to how he’s so comfortable being cheesy and playful and in my opinion, this record is him at his best.

Bruno has been heavily influential in the development of my new sound and you can probably hear that holding the two next to each other. I’ve found it really tricky to articulate and reflect my personality accurately in my music because I want to be honest and real but I also want to create a space that allows people to cut loose and feel free. Watching Bruno effortlessly embody his playful side and marry this overblown persona with his authentic personality really inspired me. 24k Magic played a large part in helping me relax a bit and feel comfortable in experimenting with seemingly ridiculous themes – like in my tunes Molotov and Fly. There’s a badass in all of us, waiting to escape and I think feeling the freedom to explore that side in my music gives space for other people to do the same.

I got close with this record working as a DJ for a trashy bar in Collingwood. That’s What I Like, 24k Magic and Chunky are Dancefloor killas and Versace on the Floor is perfect at 3am.

Listen to her on Soundcloud