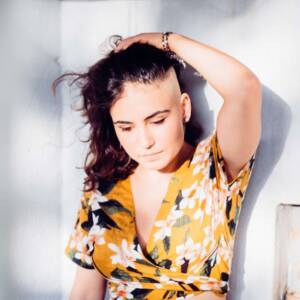 Indie-rock artist Stevie Jean has gotta be the coolest 19 year-old I know. Stevie grew up in Darwin and is well and truly a territory girl, describing the food in Darwin as “better food than all of Europe” (and having been there a couple of times myself, I suspect she might be right). After uploading a demo of her single ‘Hell in Every Religion’ to Triple J Unearthed while still in high school, she made the top five in the Australia-wide Unearthed high competition. The track took on the toxic nature of religion after attending an Anglican school as a teen. Now, with all the insight and maturity of a gap year travelling across Europe, she’s back with her latest single ‘Estranged’, about accepting others’ differences, and oneself. She’s tough, sexy and I could listen to her gutsy and soulful voice for days. Ramona were keen to know more about how Stevie cultivated such a boss musicality, so gave her the tough task of telling us about her most inspirational album. Below are the incredibly eloquent results – Stevie Jean on Led Zeppelin’s ‘Mothership’.

Rock music and human beings have a pretty fly relationship. We create the sound track to our own lives. The album that first got me into music was undoubtedly ‘Mothership’, a compilation of Led Zeppelin’s greatest hits. I would have been about seven when I first heard it. It was my Dad’s favourite so it was always playing and, once I warmed to it, I played it to death almost every day. When Mama wasn’t home, my Dad, my little brother and I used to lie on the grass outside on a big moon and blast it through the outside speakers. We lived on a rural block so there was never anybody to complain about the ruckus.

When I grew older, maybe 11 or so, I began to really listen to it with more curiosity. There is so much to study when it comes to Led Zeppelin. How they make all that sound with only 4 members, especially live, is astonishing. Drummer, John Bonham was revolutionary, not only to the band, but to the international music scene. Thanks to his ingenuity and trashy hip-hop style, Led Zeppelin achieved a sound that no one will ever touch. I reference his style a lot in my own music. Then of course there is Jimmy Page, master of blues, hard rock and folk and John Paul Jones, the quiet achiever.

Dad had a DVD that had music videos and live footage of the band. I learned a lot of my stagecraft from Robert Plant. I’d put him in the same category of elite performers such as Mercury, Simone, Brown and Morrison.

When I became a teenager, In The Evening was my alarm every morning to wake me up for school. Since I’ve Been Loving You became my heartache song and when I got my licence I used to drive out to Fog Dam (a floodplain frequented by saltwater crocodiles, emus and water buffalo) to watch the dawn listening to Ramble On. After my first high school sweetheart broke my heart he bought me Led Zeppelin, The Illustrated Biography by Gareth Thomas. Honestly, that book was worth the pubescent drama.

In high school I formed a bunch of bands, not all of them fantastic. There was one good one though, Gaia. With Gaia we opened for a lot of the Aussie Rock Greats when they came to our hometown. When the Angels came to town we covered Whole Lotta Love in front of an incredibly drunk crowd. I still remember our lead guitarist, Bayden, absolutely killing the solo. We felt like The Greats in that moment. That’s what rock n roll is. It takes the common person and elevates them to a very human type of heaven. It’s like I said before, rock music and human beings have a pretty fly relationship.