Holy Ghost is Ruby’ Jones first solo single, and came to fruition when a friend convinced her to write her own material after noticing that Ruby had hit a creativity wall, spending far too much time watching Charmed in her bathrobe. The video was made by Ruby’s friend Liam, and utilises images from the 1905 film, ‘Coney Island at Night’, overlaid with clips from the career of little-known actress Theda Bara. Holy Ghost is dreamy, dark, and other-worldy and the black & white film give it a glamorous but haunting feel, aligning with the songs’ themes of death and rebirth. Ruby says “I wrote the song in a particularly dark time, my family was grieving a loss and I was feeling frozen creatively. I am definitely guilty of engaging in a lot of negative self talk, comparing myself to other artists or friends and feeling inadequate.” She decided to let the pain go, and wrote Holy Ghost as a homage to this process: “Holding onto pain is great for songwriting but lousy for my mental health so I’m trying let it slip away incrementally, that’s what Holy Ghost is about.”

Holy Ghost is the first single from Ruby’s forthcoming album, and she will be releasing another single, Backbone, in early April. Ruby is a singer, songwriter, teacher, and Ramona Magazine’s resident playlist creator (check out some of her awesome playlists here!). She also works with Girls Rock! as a vocal instructor, an organisation that runs programs for young female and non-binary people to encourage participation in the music biz. For the last few years, she had been comfortable taking a back seat in other bands, such as Clairy Browne and the Bangin’ Rackettes, but eventually decided she needed to write her own music. She was inspired by Stevie Nicks’ 1976 version of Rhiannon, which she said “was the closest thing I’ve had to a religious experience.” When she got writing, she had no intention of recording any of it herself, instead imagining herself as a Sia type character, taking the backseat while others sung her tunes. But they became her babies, and, as she says, “after a year of writing (and some gentle encouragement) it was obvious that I didn’t want to give the songs to anyone else to sing.” And this gorgeous track and mesmerising video shows us just how lucky we are that she didn’t.

You can catch Ruby at the Labour in Vain this Saturday the 12th January, or at the Bendigo Autumn Music Festival in April. 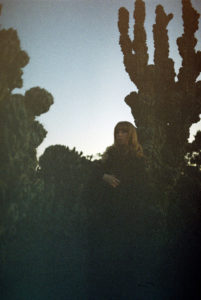