Captain Marvel and the Representation of Women in Film

Writing by Hannah Forsdike // illustration by Freya Bennett // Asides from shutting down sexist norms left and right, female strength and fear is demonstrated through Carol and the other women in this film. 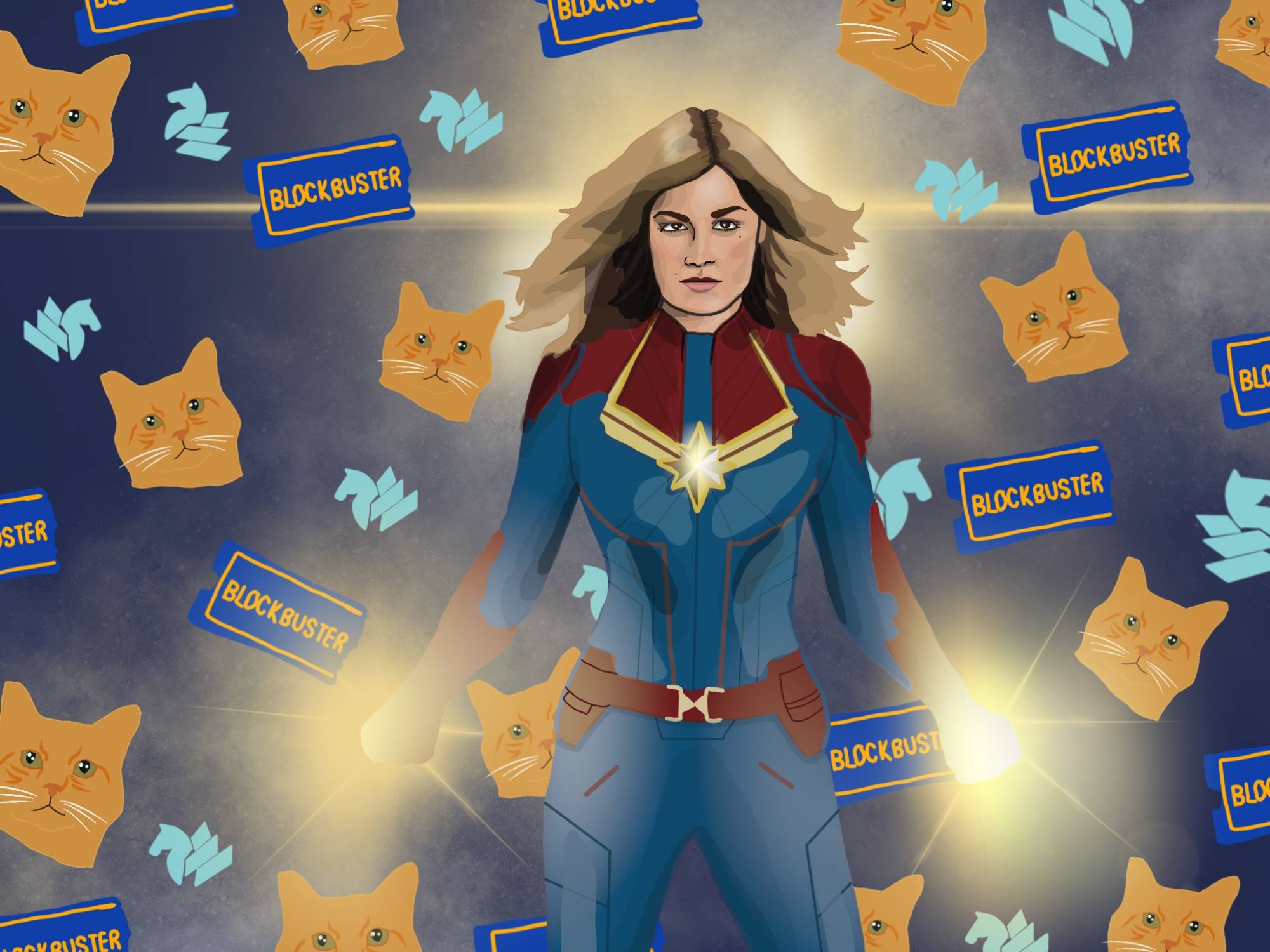 Because I’m a nerd for superhero movies and a nerd for feminism, I was obviously going to be seeing Brie Larson kicking ass as Captain Marvel on the premier night.

Although there are plenty of strong and accomplished women in the Marvel Cinematic Universe, with and without super abilities, before now Marvel had never given any of them a title feature.

I’m going to avoid any major plot points, however I would read ahead at your own risk if you are weary of spoilers and have not yet seen the film.

Captain Marvel, or Carol, is an extraterrestrial Kree Warrior, who finds herself in the cross fire of a battle between her people and another race of aliens. The fight brings itself to Earth, where she uncovers the truth about her past life as a U.S. air force pilot.

After having left the movie I looked up the reviews and was surprised to see some websites had given it such a low rating. Superhero films are always a little polarizing, and certainly not for everyone, however after reading a few reviews I quickly learned that some people felt Marvel was pandering to the feminist community and jumping onto a political bandwagon with this movie, by highlighting the sexism and discrimination in Carols story, and embracing a message of female empowerment through her ultimate victories.

I could not disagree more, ‘pandering’ implies to me that the film is forcing an overly dramatised depiction of sexism, but as a women, it all felt pretty realistic to me. The story was told from the female leads perspective, and therefore showed a more female view of the world than some of the people making these comments might be used to. Throughout the movie we see Carol deal with catcalling, creepy comments form strangers, gender based discrimination, and bias in the workplace, to name a few. This kind of unacceptable behavior is such a social norm, even today, that viewers are offended when it’s called out in a movie. And although things aren’t perfect now, we have come a long way since the 1990’s, when the film was set. In a flash back we are shown how Carol and her friend Maria, are discriminated against as female pilots.

Asides from shutting down sexist norms left and right, female strength and fear is demonstrated through Carol and the other women in this film.

I wrote a piece a while ago about the difference in the portrayal of female fear and male fear in film and TV. My theory is that the depiction of female fear is usually based around being controlled, particularly by a male, and male fear is often represented as a physical threat. My example for this was based around the characters of Jessica Jones and Daredevil from the Marvel Netflix series, I told you I was a nerd for superheroes. Jessica fights a villain who can control people with his voice, and had kept women, herself included, imprisoned under his trance. She is haunted by the fear and memory of being controlled, despite the fact that she is far stronger than him physically. In contrast to this, Daredevil’s backstory is that he was in an accident as a child that left him permanently blinded, this physical weakness highlights how impressive his fighting abilities are.

With the rise of superhero films and tropes, this is a concept I have noticed a lot recently. Carol’s powers are being dulled by a device implanted by the Kree Warriors, trying to keep her from discovering her full potential. They also neglect to tell her the truth about her past life and how she got her powers, this is all a form of imprisonment. The leader of Carol’s Kree crew, played by Jude Law, has a final showdown with Carol at the end of the movie. Despite his own physical strength, he still chose a psychological tactic in an attempt to defeat her, instead of challenging her to a physical fight he attacks her emotionally. From a literary perspective, I find it fascinating that women in movies and TV shows are usually attacked emotionally rather than physically. Perhaps this comes from a culturally developed fear of men, combined with women’s biological ability to withstand incomprehensible amounts of physical pain in childbirth.

And when looking at how feminine fear is demonstrated on screen, our strength is highlighted. When breaking free of her mental and emotional imprisonment of the Kree, Carol is able to embrace the full extent of her strength, in a visually epic fight scene in space. Marvel certainly didn’t hold back in letting this girl have some classic hero moments, even giving her archetypal hero characteristics common in male super hero characters, such as her cheeky sense of humor and action-movie-worthy one liners. Female heroins usually take on a far more serious stereotype, they are often portrayed as being a buzzkill or nagging. I was glad to see Marvel drop these traits with Carol’s character development.

Something else I felt was interesting in this movie from a feminist perspective was the importance put of female friendships. In the movie, Carol is reunited with her best friend Maria. Their close bond is revealed through flashbacks and memories, and when they are finally together again it is as if no time has passed. I’ve always felt that female friendship and camaraderie is seriously under represented in mainstream media. The bonds I have with the women in my life have shaped and impacted the woman I have grown into, and Carols relationships with her best friend and her mentor resonated with me as a viewer. It’s so important to show women supporting other women on the silver screen, what we see in the movies and TV shows we watch leaks through to real life, altering and encouraging our behaviors. If girls are only ever exposed to women in film supporting male protagonists, how will we supposed learn the value and importance of supporting one another?

I grew up loving science fiction, fantasy, and everything in between, and looking back I often struggled to resonate with the female characters on screen, because women weren’t often painted as the hero. And what kid doesn’t want to be the hero?

My heart is full at the prospect of the next generation of girls having some honest representations of female heroism to look up to. And I think it’s a shame that anyone would attempt to devalue the use of a strong female protagonist by equating it to jumping on a political bandwagon. We are deserving of on screen representation; our strength, weaknesses, fears, struggles, and joys should be shared. Everyone can benefit from this kind of honesty. Captain Marvel, amongst other beloved female heroins, is another step in the right direction towards more transparent and empowering representation of women in film.