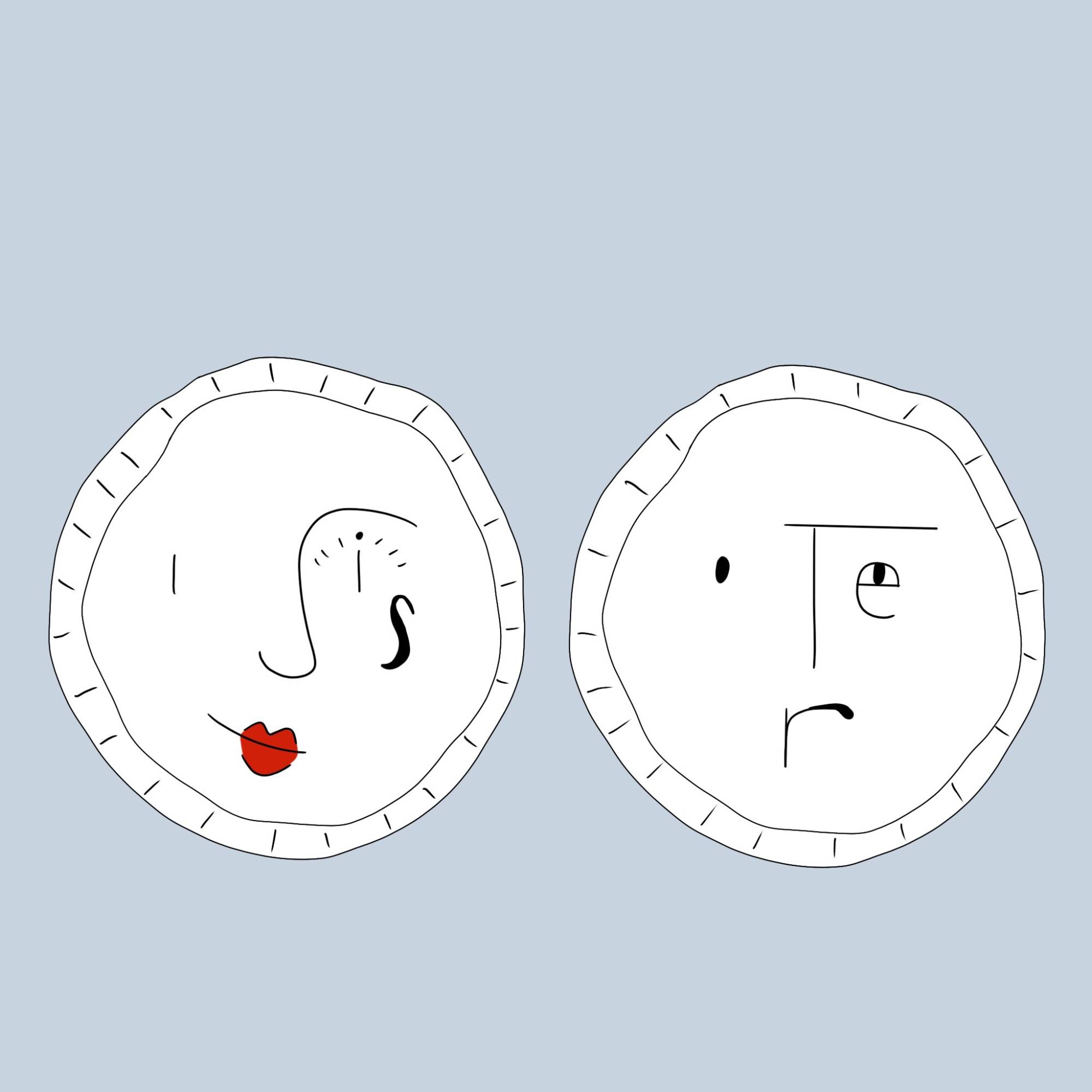 When I think of my life, when I look back. I see beaches. The sea and the sands and the stinging salt and the gulls and the broken piers and Sister. The first was at 3, or 4. Maybe even 5. The flat sands, endless when the tide was out, were sodden and dark and glistened with water; a sheen that trapped colours not seen in the grey sky. Grownups made them hiss with their cigarette butts. The sands and the cold sea enveloped pale limbs that were raw and rashed from the mixture of salt and grit and scrubbed in suncream. Drab skies made their paleness even starker as they pushed through the grimy tide, fluorescent bucket bobbing in tow. Once full, it was hauled up the beach, water sloshing and plastic handle biting fingers white and red. Tiny feet slapped then sank as the sand changed from wet to dry. It was for the castle. Sister had smoothed its walls, gouged out tiny arrow slits and scoured scalloped patterns with whatever slivers of fingernails remained unbitten. Before that, I had shovelled buckets, smacked out air holes, and scooped sand for the mound. I had laid the foundation, and she had made it beautiful. But the moat would not fill. Water would crash onto its banks, hissing and foaming along the grooves, before leaving behind nothing but darker sand and the unabated hope that just one more bucketful would let it fill to the brim. Back and forth with the bucket that bit, to and from the tide that stung cold. But still, the moat would not fill. I can’t remember if the idea was mine or Sisters. Part of me thinks we thought it together, because we began tunnelling a path to the sea in unison. Hands scrabbling over and under each other in flashes of sand flecked white that dug and clawed and merged into one so mine were hers and hers were mine. We had one rhythmic thought: for the salt and the brine and the water; and for that moment, in that reaching, searching for the sea I was sure we were one. That first beach was the castle, and the smell of fag ash and ham sandwiches and the musty picnic blanket with foil on one side and tartan on the other. It was the sound of the tide in a plastic bucket and seagulls and the word sister.

The second beach was hot. The strip of sand in-between the sticky sports bars and the sea burned in a way that was at once pleasure and pain. We were far from home and yet eyes still snagged on shorn sides and glints of gold chains and hardened tongues and black crosses needled into skin. We were far away from home, but pieces of home were here too. On one end of the beach there was a huge pile of rocks, stretching from the sand into the sea, a slender grey finger driving salt and spray high into the air. Sister would lead the climb, and I would follow.

Fingers and feet bare and scrabbling, scrambling for grooves and footholds. I watched carefully the way she went, so I could climb the same path, up to the top then along the finger as far as we dared. Lips cracked with salt and hair dampened and curled on foreheads. We held hands to steady, flesh on flesh holding tight and feeling the strength of bones and muscle underneath. Sisters eyes were never still. They constantly flitted, searching for the next thing. She was taller than me now too, she had begun stretching towards clouds without me. Because of that, because of her flitting eyes and her inches taller, she saw the skull first. In the crook of the dark finger, a harsh white against the grey. It looked delicate amidst the rocks, breakable, yet for the most part it was intact. “An elephant?” It was large enough I thought, with a leering grin that spanned black, black socket to black, black socket. “No, only a sheep.” “From here?” Her head twisted a no. “From out there.” She pointed out to where the sky and the sea met and merged. Sister knew more than I did now. We had night-times at that beach. Eating outside on sand in front of the pubs. On one side; the warm brown, the sports flags, the jewel-like bottles, the sputtering electric fans. Blackness on the other, with only the briny smell and the churning tide giving clue to what was out there. We ate steak and chips that swam in oil and pasta bolognese only just lukewarm from the microwave; food that had a deliciousness like no other. We glugged mocktails and scraped off the sugar that coated the glass lip with our teeth. We staggered and pretended to be drunk and wondered aloud what it would be like to run into the darkness, into the invisible waves, we wondered if we would ever be brave enough. We slept top and tail on the jaundiced mattress we shared for the week, black sand scratching between the sheets. The phrase top and tail made me think of a penny. Two sides of the same.

Beaches know nothing of time, only the constant of the tide, and when we returned to the second beach a few years later, it was exactly the same as it had first been. We had grown older though, Sister even more so, and with it, her bones had begun to itch. She swapped suncream for oil so that she could sizzle on her beach towel, her skin deep-fried to a gold that made her teeth look a harsh white, like the skull. She stole cigarettes from the grownups and made the black sand hiss with the secret. She climbed the rocks without saying she was going to. I couldn’t follow her up, I couldn’t find the footholds that were safe without her. So I watched her from the shore as she

picked her way along the finger, right out almost to the tip, further than we had ever dared go together. She stood there for a while, staring at the horizon where the skull had come from. I watched her and couldn’t even imagine what she was thinking of. In the nights on the beach, she sipped drinks like the grownups; cocktails with sordid names that she ordered with ease. She held her glass like a movie star and spoke of the life she wanted for herself, one that was so different from the life we had. I wondered if that life would include me. Sister went for a midnight swim that night, with a girl she had met on the beach. The girl was a cousins girlfriend from back home so that was safe, said the grownups, and so Sister was let go. She ran into the blackness towards the moon laced waves and I was not brave enough to go too. Instead I stayed with the grownups at the table staked in the sand and waited for her to come back.

The beach felt so empty without Sister.

The beach felt so empty, but suddenly so loud. Shouts and screams from the tide then from our table. A glass fell and smashed and splintered into the sand and the night fragmented into sirens and uniforms and blaring lights and churning air and wet crumpled faces. Underneath it all there was the gentle wash of the midnight tide, stealing and teasing. And somewhere, lost in all that blackness, was Sister.

That was the last of the second beach.

The third beach I am alone on. Where the first was flat, this has dunes. Where the second was black, this is a drained kind of gold. But there is the same water and sky and the thought of Sister. For me, she was the constant of the beaches. The word sister alone carries the hiss of the tide and the blue grey of childhood skies. It is the sand between toes and sheets. It’s the sight of reflections slightly altered and the feeling of her name at once being mine. It’s a castle with an empty moat and a hand with bitten nails gripping mine tight. The word tastes metallic on my tongue, like a penny. Top and tail. Sister starts and ends on a beach and maybe one day I will end on this beach too. Maybe I will walk into the cold, but won’t feel it. I’ll walk into the water, but won’t swim. And maybe if I keep walking far enough I’ll find her. Because who am I without Sister.

Shannon Mary is an artist, curator, and writer from Melbourne, Australia. She works with paint, ink, and digital to create majority of her visual art and is inspired by the stories of others.

Jessica is an actress based in the North of England. In between auditions and rehearsals, and when she’s not reading or daydreaming about writing, she writes.