The Sexualisation of Female Characters in Macbeth 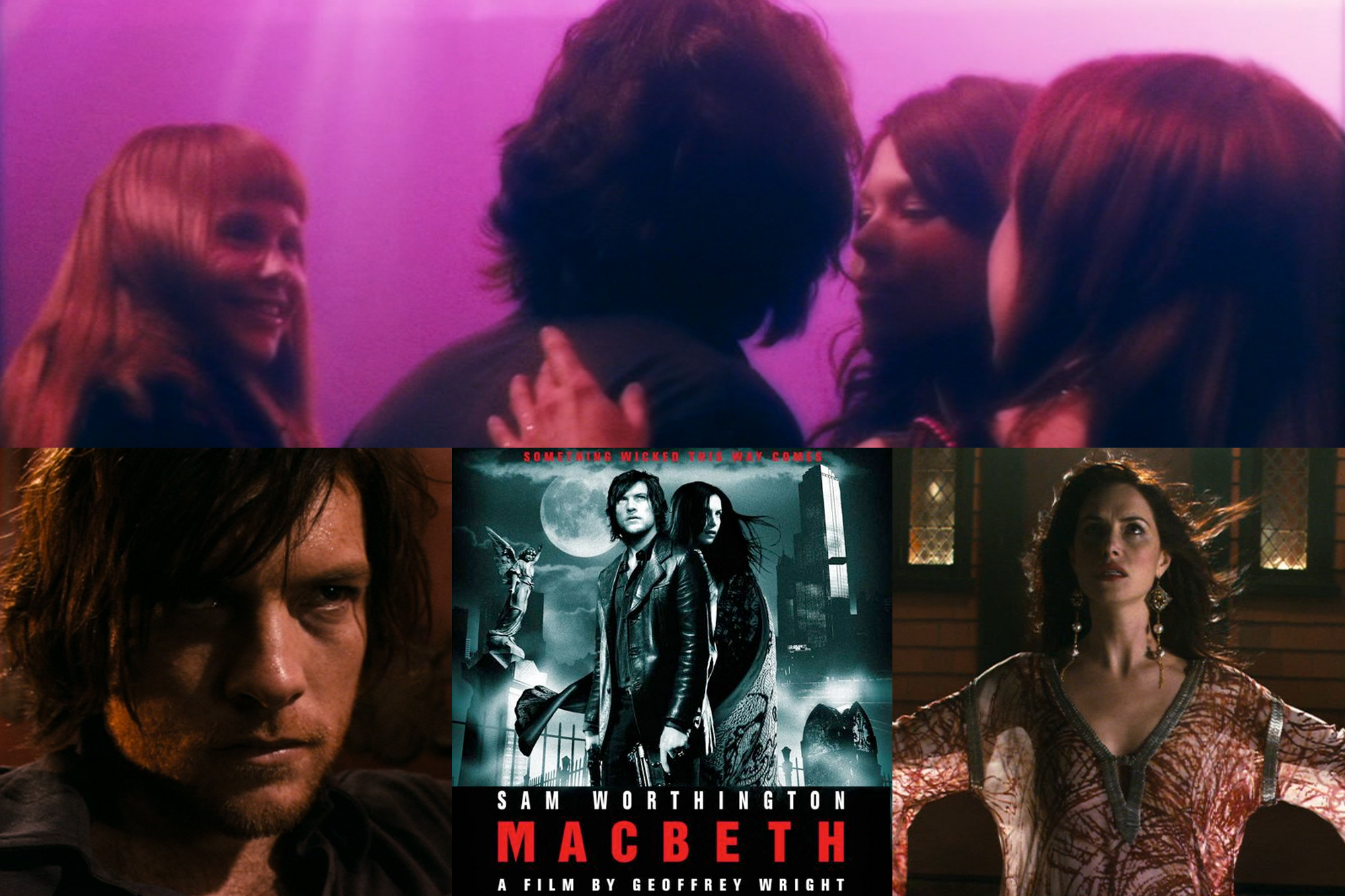 The 2006 Macbeth film is a tense, compelling thriller and a creative adaptation of the eponymous play, offset by extremely sexist portrayals of Lady Macbeth and the Wyrd Sisters.

Transplanted to the Melbourne criminal underworld, Macbeth has strong performances, lavish art direction, stark scenes of violence, and a masterful tense escalation. Sam Worthington displays surprising range as Macbeth, playing a stolid man whose crazed, swaggering ego grows palpably after his murder of King Duncan, and Victoria Hill conveys captivating sensual malice and fierce will as Lady Macbeth. As Macbeth’s arrogance and paranoia intensify, his acts of cruelty multiply, suspicion grows within his court and his allies dwindle, all building up to a brutal gun-fight climax.

The film also contains some brilliant present-day interpretations of details in Shakespeare’s play.

Macbeth experiences his first vision of the Wyrd Sisters while stoned in a nightclub, with the dance-floor’s lighting and fog effects emulating the gloomy moor setting of the play’s equivalent scene. The apparition in Macbeth’s ‘Is this a dagger I see before me?’ monologue is the shadow of a plant in his garden. The prophecy of ‘Macbeth shall never vanquished be, until Great Birnam wood to high Dunsinane hill shall come against him’ is fulfilled when Macduff, Malcolm and their forces drive a timber truck owned by the Birnam Timber company in their assault against Macbeth’s estate, which is such a genius idea I cheered when I saw it.

I have a feeling that this film’s gritty gangland aesthetic was influenced both by the popular Underbelly crime drama TV series and 2005 film, Batman Begins, the latter being a dark tonal game-changer in Hollywood blockbusters.

The 2006 Macbeth isn’t the best Shakespeare adaptation with a radical new context – Akira Kurosawa’s Throne of Blood is my favourite spin on Macbeth, and my favourite Shakespeare film of all is Richard Loncraine’s Richard III, which reimagines the titular historical play in an alternate-history fascist 1930s – but Macbeth is still a suspenseful, well-acted and inventive adaptation.

And yet, its portrayal of female characters is degrading and unnecessarily sexualised.

Lady Macbeth is one of literature’s greatest female villains. In a society where women have little power, Lady Macbeth uses her formidable intellect to control others. She shames and manipulates Macbeth into action, and shows much of the initiative in their regicide plot. She is also more innately cruel and heartless than Macbeth, in a twist on traditional views on gender.

Lady Macbeth is almost naked during her ‘Out, damned spot!’ monologue. This scene is supposed to render her vulnerable, as the delayed guilt of Duncan’s murder has driven her insane, but literally exposing her like this is too far. After she is sedated, Macbeth briefly caresses her unconscious body. After Lady Macbeth ends her life by cutting her wrists, she is shown naked in the bath.

Lady Macbeth is a dangerous, sexy character, but this film contains several scenes of her being degraded and sexualised in a state of extreme vulnerability, and even in death.

During Lady Macduff’s murder, the hired killer looks aroused as he garrottes her.

Making the Sisters young and sexual isn’t an inherently bad idea. A parallel may be drawn between their sexual lust and Macbeth’s lust for power, and them having sex with him makes him lower his guard and believe them more readily. Beyond their vague prophecies, the Sisters further toy with Macbeth by vanishing in the middle of the scene, leaving him without answers or release (as it were).

But this intensely sexual characterisation represents a stereotype journalist Suzannah Weiss described in a recent tweet:

The Sisters’ sexual encounter with Macbeth is shot in a shallow, titillating fashion, and made even more distasteful by the fact that the Sisters are schoolgirls, as shown in the film’s opening.

Macbeth is a great gritty modern take on Shakespeare’s famous tragedy and a taut, visceral thriller, but the female characters are degraded and objectified, which makes me hesitant to recommend it.