No Matter Our Wreckage: Interview with Gemma Carey 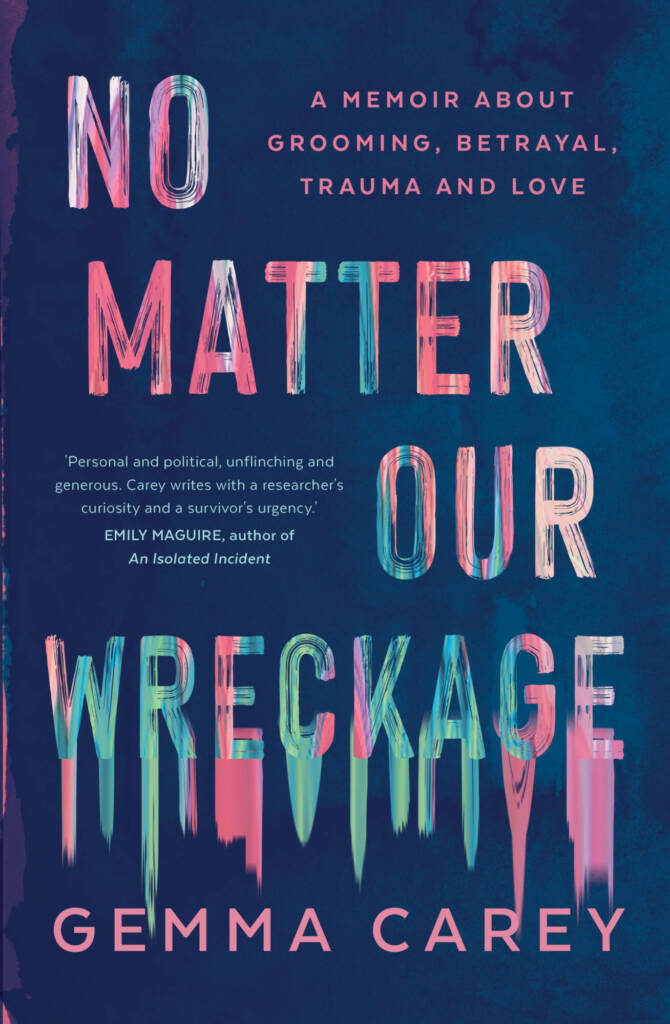 Gemma Carey’s debut memoir, No Matter Our Wreckage, explores themes of loss, traumatic grief and complex family relations in the wake of trauma. Ramona Contributer Julia Banks gave Gemma a call to discuss the process of creating such a gripping memoir.

I began to read No Matter Our Wreckage by Gemma Carey, expecting the linear narrative that most memoirs zeroing in on a traumatic experience seem to follow. But her story bent and looped, zigzagged between betrayal, love, and illness; it took a magnifying glass to family and self in the prologue to, and wake of, trauma. It is a clear reminder that the past rarely settles peacefully where it chronologically belongs; that the present has a way of making us double back, time and time again, to dissect ourselves in our past. It was done so seamlessly it’s hard to finish and remember the reader has been on such a detailed and perceptive journey of loss and learning.

Gemma Carey is a Professor at the University of New South Wales, researching in disability, public health, and education, with an impressive academic history and field of published memoir pieces online. Her debut memoir novel initially follows the story of being a victim of child sexual abuse, but the clinical vindication of her trauma – a successful court case against her abuser – comes early in her writing, and the rest of the memoir takes the reader as a passenger into her deep dive of all the familial ties, history, and societal narratives that allowed the abuse to happen. The book seems to take its unexpectedly placed neat conclusion to the abuse as a prologue to the crux – an exploration into family and self after her mother’s death – and what eventuates is a story about what makes people do the bad things they do, and if the knowledge of such factors ever make forgiveness possible.

Having devoured the book in one afternoon, on the edge of my seat, it felt hard to comprehend someone could endure the loss and grief that Gemma has, survived to make sense of it, and managed to write a story that seeks to explain the forever evasive, unknown lines between grief and disgust; empathy and forgiveness; good people and bad people.

Which is interesting, because when I spoke to Gemma about the reception of her book in her professional world, she said “When I wrote it, I didn’t feel like I was producing a really sort of sock you over the head brutal piece of work, but I know that’s the experience of a lot of people reading it if they’re not used to that genre… it can be a bit startling.”

Gema says she wrote the book in “twenty years and twenty days”, describing the way the first half naturally came to her as a result of the past twenty years of living through the events.

“The first half of the book was so natural to try and unpack and describe a kind of whirlwind, I wrote it as I was living in this kind of chaos of cancer and psychosis and you know it was a way of just trying to explain it and get it down; what is this crazy world I am suddenly living in?”

She explains that it’s the second half of the book that is difficult for her and her family, when Gemma dives into her mother’s life and the precipitating factors that led to her allowing the abuse to continue, her father’s coping with the death, as well as touching on her own abuser’s life.

“The first half came very easily and the second half was more tricky. I think because so much of the second half doesn’t necessarily feel quite so much like my story, and that was a lot harder. And my father had read the first half of the book but not the second half, and I think he that would actually really struggle with the second half which is why he doesn’t read it… The second half was harder because it was a balancing act of, I feel a bit like I’m betraying my mum or my dad or my family by putting it out there into the public and just having to sort of remind myself a little bit that it’s my story too, and with any kind of writing it’s always contestable, it’s always one person’s account, and other pepole are welcome to write their own account… sometimes memoir and autobiography get confused, but a memoir is a curated set of experiences from your life, it’s not your whole life, and every person in it is real, but every person in it would bring their own version of the story to it.”

I was most curious about how Gemma’s personal, creative work had been received in her professional life, especially in a field that is so male-dominated. She says she tested the waters with some articles published in the Guardian about the abuse, and other personal exerpts from her life, “they were giving me a taste of what it was like to kind of put a personal narrative out there when as academic researchers, we’re really almost not allowed to do that, it’s really discouraged, we are our research and you keep everything else locked away and private.

“I sat on the book for about two years before I actually contacted an agent, and sitting with, you know, do I really want to put this out there, and I gave it to different colleagues to read, and when I gave it to an older male colleague professor of mine to read, and the world didn’t kind of collapse around me, and you know, I could bear it career-wise and personally, then it was going to be okay to put it out to the world.”

But now, she can’t imagine ever not tapping into the creative side of authorship, “Academic writing is very very constrained. There’s a lot of conventions to how you write. And now I do both all the time, so I’ve kept writing narrative non fiction and I’m working on a second book because I haven’t been able to go back into my little box of academic writing and that world, I’m too frustrated now, not being able to be creative like that.”

The reader may, at times, feel they are sitting right next to Gemma as she realises, for the first time, many of the psychological theories underpinning her thoughts and behaviours in times of grief; riding the ‘aha’ moments Gemma experinces as she reflectively researches her past reactions. How did the research process affect her healing?

“So much of writing the book was the process of sense-making for myself, that those extra bits of research I did when I wanted to contextualise it … [showed me where] I sit within the broader frame of how survivors and victims respond to things. And when I found that research I thought oh, okay, it’s not just me. So with another layer again I think of understanding that a lot of the things that I’d been doing were actually completely common for abuse survivors as well.”

Unfortunately, it’s to be expected that a female author detailing sexual assault cannot do so without also writing about the effect of the male gaze on women. In society, the two seem inalienably bound; that many cases of sexual assault against women arise from a systemic oppression and disdain for the gender in the first place, no matter how buried the inception of such violence seems. How does Gemma feel about living under the male gaze as an adult?

“I think it’s so deeply engrained… even having kind of pulled apart and sorted through and sorted out all of these things that I’ve had to in order to write a memoir, I can never really completely get rid of the chaos of it. It can still be there but I notice it now, I think is the difference. When you internalise that stuff and you act on it but you don’t know what you’re acting on… that’s when you can go down wrong paths. Recognising it can be so much harder than we ever realise, especially if we’re on the other side of it, I think, why on earth did I not see that or call that person out? Because that’s the nature of the patriarchy, we are submersed in it, it seeps into us in ways you can’t always identify until you’ve gotten out it.”

Gemma seems to have ‘gotten out’ of such stifling constructs in a way that’s allowed her to write the poignant, timely memoir that can hopefully encourage other young women to identify such forces in their own life.

No Matter Our Wreckage is available now at all good bookstores.