Interview of Montaigne by Freya Bennett // photographs by Jacinthe Lau 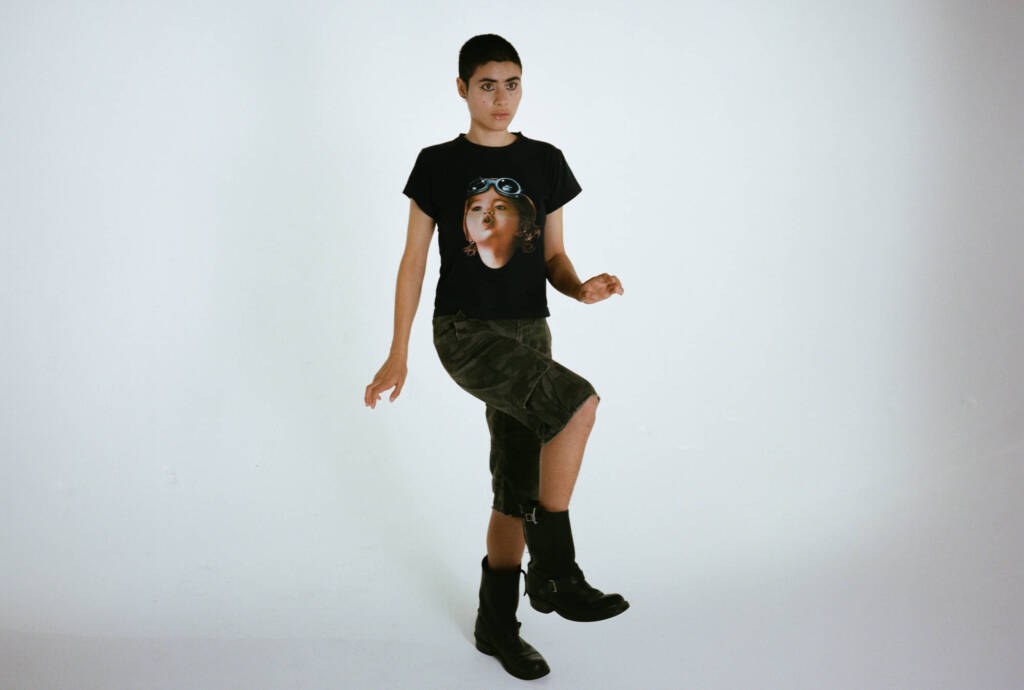 When I ask Montaigne what making it means to them now, at 27, they talk about feeling like their goals are more in alignment with the greater security they have within themselves. This feels like a wonderful place to be with the release of their third album, Making It out today.

“I don’t feel like I need to chase this clout or recognition in order to fulfill my sense of self. I’m a bit older, I’m less insecure I think, still insecure, but less so.”

Their energy is calm and I immediately feel a lot warmth – it feels like they are truly comfortable in themself and where they are in life.

Montaigne opens up about how they don’t know if it was genuinely their drive or society’s expectation, but they don’t feel that same drive to have crazy massive success that makes them a ‘big pop star’.

“Without realising it and without having reflected on it too deeply, the pandemic is definitely owed for some of my thinking. I really enjoyed being at home and not having to fly everywhere and getting to spend time with Pat (their partner) a lot.”

Montaigne acknowledges that they were lucky in that they didn’t have to worry too much about money during the lockdowns and we talk about how they found a sense of peace with the simple things in life.

“I think I’m ambitious in the sense that I love being creative and I love making new things and giving them to people, letting them hear it and feel it but I don’t need to translate that into some grandious success.”

Having listened through the album, I was really taken with how different the start of this album is from Montaigne’s previous anthologies. Embracing more electronic sounds, Montaigne reflects on how their taste changed.

“During the pandemic I got really into hyper pop like 100 Gecs, Sophie and Charlie XCX … and I wanted to do something that felt similar. I don’t think my music really fits under that sort of banner, but I think it’s like an experimental pop that is mostly comprised of electronic sounds.”

We talk a bit about how you can find yourself having negative feelings about certain art or music and then suddenly, you realise you absolutely love it and can’t get enough.

“In a way I used to shun that kind of music almost… I don’t know what changed but suddenly I was gaga about it. Part of it was letting go of my weird insecure preconceptions about what authentic or good music is. And also, starting to have more fun in life instead of being sad all the time.”

I talk about my perpetual love for sad girl music and how this informed my feelings surrounding her song Gravity of which David Byrne collaborated on. While the sentiment and feeling of the song is so sweet, for me as a listener, it felt almost bittersweet. I wanted to know if it was just my reading of the song or if there was something about it that was sad. I’m surprised to hear there is such a backstory behind the song which, based on how beautiful the song is, makes me want a whole novel to read about this story.

“The song originally stemmed from this other character I had in mind as being like the central voice of the record that I sort of shoehorned into this. I started writing this song about this person I called ‘the space lady’ and she was this person in the near distant future, working as this solo pilot for a space land purchase/resources purchase company who would send these people out to survey the cosmos for any valuables and report back.”

“This is a song describing a situation where she’s fallen in love with someone who lives on earth and works on earth, and she was like ‘man, what if I just stopped flying to space and having to leave all the time and having to work in this way and just had a settled life with you and we just felt grass on our feet all the time.”

As someone who has just bought a house in the country, after years of dreaming of putting her feet on grass (and not AstroTurf), this resonates.

Montaigne laughs that this song was written before their partner Pat and them had moved in together and the song was kind of posing this question in a safe space.

I ask if he said, ‘yes’ after they played it for him to which they laughs and respond, “it was an ongoing conversation we were having.”

It doesn’t hurt to have a song though and clearly they were on the right path because Pat and Jess (Montaigne’s real name) are now living cosily together in Sydney.

Montaigne collaborated with a few amazing artists on Making It, David Byrne (of Talking Heads) being one very big name who collaborated on tracks Gravity and Always Be You. I ask about the process to which Montaigne responds:

“It was great, he’s wonderful. It was very easy; it was all over email. He’s very fun and he loved the music which was so nice.”

I ask whether David Byrne was someone they’ve always wanted to collaborate with, Montaigne responds emphatically:

I mention how it really sounds like he loves the song, in that you can hear he’s giving it his all and not just singing his lines.

“He fully understood the content and was able to write to fill in the gaps.”

After listening to the entirety of Making It, I feel there is a very clear narrative. We start with the more electronic songs and as we progress through, the songs become more organic, giving the feeling that Montaigne’s armour is coming off. I ask if this was intentional or a lovely coincidence.

“The arc in my mind was going from pre my {current} relationship, into the start where I really struggled and into increasing security and stability to delight and just, ease I suppose.”

We delve further into that, and Montaigne talks about how some of the first few songs are from early on in their relationship

“They’re weird, anxiety-fueled songs and that very much was where I was at the beginning.”

“My first partner was just deeply unhinged, and I didn’t know until a year after.”

We discuss the power imbalance that can come from a big age gap at an early age and how it’s hard to know what’s normal behaviour when you’re inside the relationship. These experiences carry on to other relationships.

“We (Pat and Jess) both had to have heaps and heaps of talks about where we were both at and eventually, we learnt each other’s rhythms and it all became way easier. And that’s where we get to at the second half of the record which is a celebration of surmounting all of the confusion that is joining as two people with unique insecurities.”

“It’s something I’ve only just reckoned with. It was a very subconscious fear for a long time and then eventually I was like ‘Wow, I sure am writing a lot about death.’”

I feel like music is a wonderful way to process these anxieties and Montaigne agrees.

“I often play through the worst-case scenario of any given thing in my head beyond my control.”  Yup.

This leads us to discuss the final song on the album Comet Death of which I feel is a beautiful, yet somewhat dark lullaby.

“I started writing that when I was thinking about how people say a comet could just come and hit earth at any time and like, we can see it coming but it would be a matter of a couple of days of warning and just how that would decimate life on earth.” (new fear unlocked)

To change the tone a little, I ask Montaigne for some video game suggestions as a novice who is interested (but a little intimidated) in trying out gaming.

“I actually have quite a few recommendations. My top recommendation is a game called Spirit Farer which you can play both on Mac or Nintendo Switch. It’s a game where you are taking over from Charon, the spirit farer who takes the dead to the afterlife.”

“It’s you and your cat, finding these wayward or lost spirits who need to get back to the next life but for some reason you kind of know all of them from when you were alive. It’s really beautiful. It’s one of those games that is partly a game but partly an emotional experience and you don’t need to be very good at games in order to play it. It’s a wonderful way if you have any fear of loss to process that.”

Somehow, even Montaigne’s Video Game suggestions are on brand for this album.

“And Star Dew Valley, which is a relatively wholesome farming simulator kind of one that is extremely addictive.”

Finally, I ask Montaigne about how they want people to feel after listening to the album, especially after such a poignant ending with Comet Death.

After a long pause, Montaigne answers:

“I think the message is that it’s crazy this could all end right now and still everything means so much to us. Even if you don’t believe in God or some higher power, it’s hard to feel, for me at least, that everything is futile.” 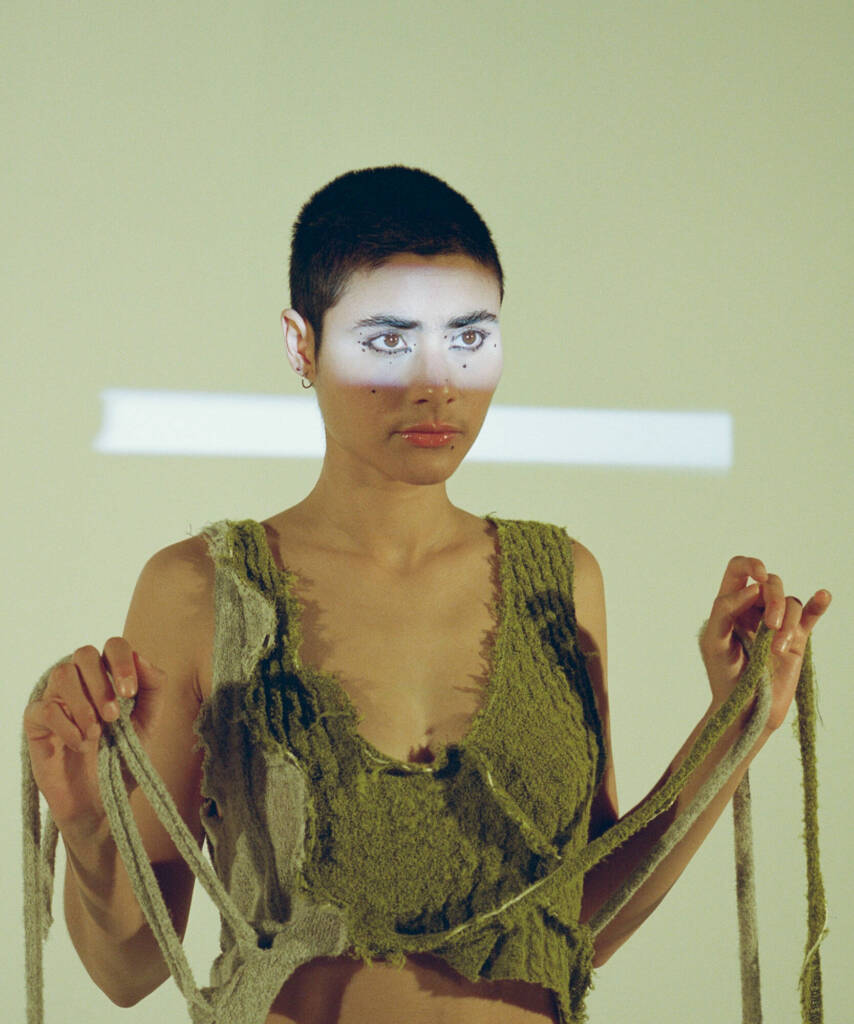 Listen to Making It, out today, here.