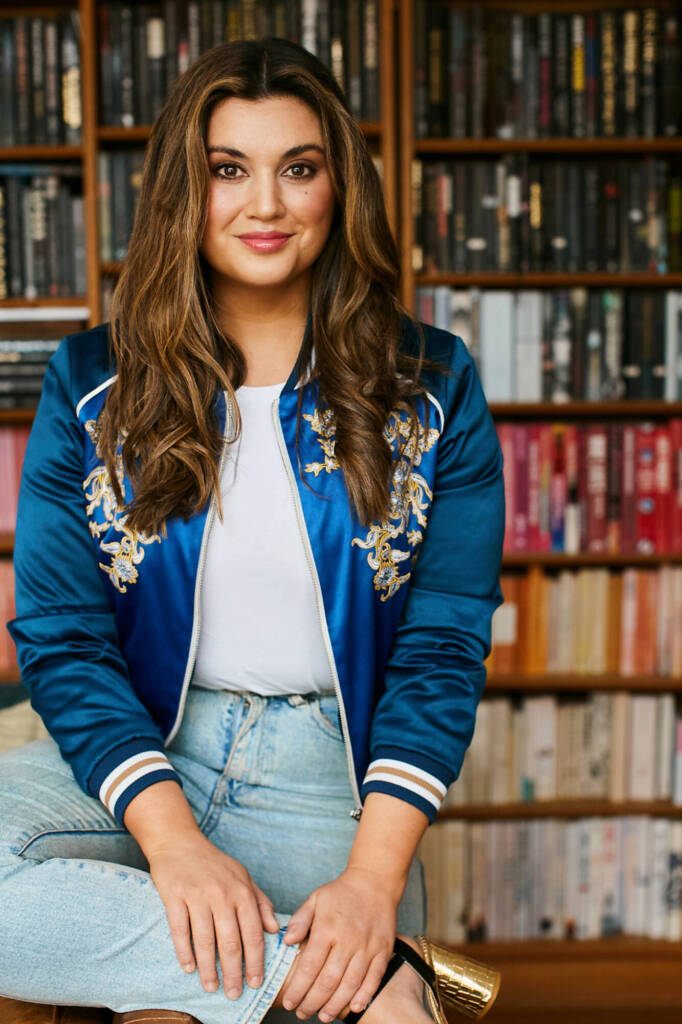 Jamila Rizvi is an author, activist, podcaster, and gender equality advocate. She has worked in politics, was the editor in chief of Mamamia, she’s written and edited multiple, highly acclaimed books and is currently the Deputy Managing Director of Future Women.

Jamila is someone I’ve admired for a long time and have felt speaks to a lot of feminist issues I am passionate about from motherhood, to the care economy to opening up the binary when it comes to men’s fashion.

I reached out to Jamila for a chat with the hope of learning a little bit more about her process and her success and she did not disappoint.

We start by chatting about where we grew up and Jamila shares with me that she was a Canberra kid – which makes perfect sense considering her early career in politics. Jamila is very much a Melburnian now though since moving here in 2015 after meeting her husband. Jamila mentions how at home she felt in Melbourne almost immediately and that gives me a rush of fondness for our warm and welcoming city.

We talk about school, and I’m not surprised to learn that Jamila was a high achiever.

“I was a nerd, at both school and university. I was the kind of kid who wanted to do everything. I felt like I didn’t have enough time and space to be part of all the events and activities and clubs that I wanted to do.”

Jamila’s foray into politics began very early in her adulthood when she became involved in student politics at university. She was the president of the ANU Students’ Association when she was invited to be a delegate at Prime Minister Rudd’s 2020 Summit.

“I don’t know how much I had to offer in those rooms of impressive people at 21 but it was an amazing experience. I got to meet the new Prime Minister and I remember him saying “you should see me for a job one day”.

Jamila took that comment from the PM and ran with it. She found out through contacts that there was a vacancy on the media team, was introduced and even called the reception to inquire about an interview.

“I had a lot more confidence then, than I do now,” she laughs “I spent a couple of years trying to finish my university studies as well as working for the new government. I went from Kevin Rudd’s ministerial office to Kate Ellis’s Ministerial Office and worked with her until the later days of the Gillard Government. “

We talk about the confidence we both felt we had more of in our teens and early 20s, I ask Jamila if she has any thoughts on why this is.

“There’s a gendered element to it… the way we socialise girls and women means we tend to thrive in an educational setting, where there are really clear rules for what success looks like. Then, when a lot of women enter the workplace, there aren’t clear rules for achievement and progressions; there is so much more at play. Particularly for privileged young women, that’s often the first time they come up against real barriers to success.”

Jamila talks about how she struggled with suddenly not knowing the rules and how to get to the next level mentioning that the more time she spent in the workforce, the more she realised what she didn’t know.

This resonates with me a lot as someone who had always had the confidence to try things and fail yet the older I get, the more reserved I become when it comes to taking risks. I often have to remind myself that a 35-year-old man wouldn’t hesitate to try things and put himself out there – this always helps me find the confidence I need. Or at least fake it and push on anyway.

I know that politics wasn’t a long career for Jamila so I want to know what happened and why she moved on.

“It was a pragmatic choice. I expected that the Gillard government was going to lose by that point, and I made a purely self-interested, strategic decision that I didn’t want to be unemployed along with a whole lot of people who had the same skill set as me. I wanted to be ahead of the game.”

This was a really hard decision for Jamila because she felt a lot of loyalty to Kate Ellis, so leaving her and that team with the knowledge that they were going to have a really hard few months was something that she wrestled with.

“Lisa Wilkinson tweeted ‘this is the job a thousand girls would die for’ – that line from The Devil Wears Prada film – so I clicked on the link, and it was a job advertisement for the new editor at Mamamia. I applied and got the job.”

Jamila worked at Mamamia for four years, honing her writing and editing skills under the coaching of Mia Freedman.

“I learnt a tremendous amount working at Mamamia. Still today when I’m writing or editing, Mia Freedman is often the voice in my head. She is an excellent editor and a lot of her lessons have stuck with me. They changed the way I write. She sucked the Canberra bureaucracy out of my writing and helped put something interesting in it.”

Jamila talks about how fun it was to work at Mamamia during their tremendous growth period but after having her baby boy, Jamila felt she’d outgrown the job and that the job had outgrown her.

“I changed course and decided to work for myself”.

Something I feel often happens to women after having a baby, is the desire to be their own boss. I had a strong urge to work for myself after having my daughter and I know other women who’ve followed similar paths.

Jamila decided to write a book. I am impressed with her ability to be a new parent and have the energy to write a book, but Jamila assures me it had been in the works for a while.

“I had been thinking about that book for a couple of years, so the concept was already there. And by the time I got around to actually writing, my son was six or seven months old.”

We talk about the actual process of writing and we agree that it can be really difficult when you’re in the writing phase but the euphoria of finishing something you’re proud of is like nothing else.

“I enjoy the feeling of the writing being done,” Jamila laughs and adds, “there is nothing better than having thought about something really deeply for however long and finally getting to go and talk to all these people about it.”

Which has me thinking deeply about what conversations I want to have and whether I have it in me to write a book about them. As I ponder out loud Jamila says to me that you’ve got to really think about the topic of your book and whether it’s something you can be into for a long period of time.

“It has to be about something you’re not going to get bored of quickly”.

I ask Jamila if she has any new books upcoming to which she responds with her impressive schedule. Working for Future Women full time, as well as hosting ‘The Briefing’ podcast, Jamila does have a book in the works for us to look forward to.

“I’m working on a book for Penguin Random House which is about the intersection of physical and mental health. It’s different to anything I’ve ever worked on before.”

Jamila shares that it’s a slow burn of a book because of her busy schedule and she feels it’s very different to anything she’s written before, being more research and interview heavy, as well as departing from the gender space.

I ask whether she was inspired to write this book after her brain tumour experience to which she nods and adds:

“I was diagnosed at the end of 2017. It was hugely unexpected so it came as an enormous shock. Over the next two years, I had multiple brain surgeries, radiation treatment and acquired a considerable number of disabilities that shape my daily existence now.

Jamila talks about how although her husband and her made the decision to talk to a psychologist straight away, it would be two years till a medical professional suggested she see a someone for the mental health side of things.

“This book is a deep dive into where that unfair valuation, that and almost hierarchy of sickness, comes from and how we could do it better.”

We talk about invisible disabilities and how Jamila handles the limitations she has now. As someone who deals with an invisible disability myself, I nod in agreement when she talks about how you can’t really understand chronic health issues until you go through it.

Jamila talks about how, in the last 18 months she’s really made a lot of progress and found what kind of energy levels she has. Through trial and error, she now knows when rest is needed, she knows when something is going to be too much and she knows what she can manage.

“I’m living a more balanced life for the body I now occupy.”

I ask about how we can support disabled people moving forward and Jamila talks about how she feels about disability and society:

“Our conditions are often manageable, but we live in a society that is built for able bodied people. Many people feel the environment that disables us more than our bodies.”

I want to end by asking Jamila where she thinks feminism is heading and what she feels is important for us to focus on.

“For me, the priority is women in the care economy, specifically women who are doing both paid and unpaid care work.”

Jamila talks about how the pandemic has shown us the importance of care work and the essential nature of care work. We talk about how it was early childcare educators, aged care workers, nurses and teachers who were still going to work and how the vast majority of these workers are women who are not paid very much money.

We also talk about the often completely invisible care work of those who stay home, to do care work like home-schooling completely unpaid.

Jamila is hopeful that the pandemic will spark a conversation about how much we value care work. And we talk about how, just because this work is often born of a place of love, it doesn’t mean this work shouldn’t be paid properly.

Speaking with Jamila Rizvi on these topics has reignited a fire in my belly. I feel inspired to continue talking about the inequalities we face in society and I feel inspired to know that a woman who has been through so much, who continues to work through ongoing health challenges, has such a passion for equality and fairness that she won’t stop this conversation.

In Conversation with Three Women