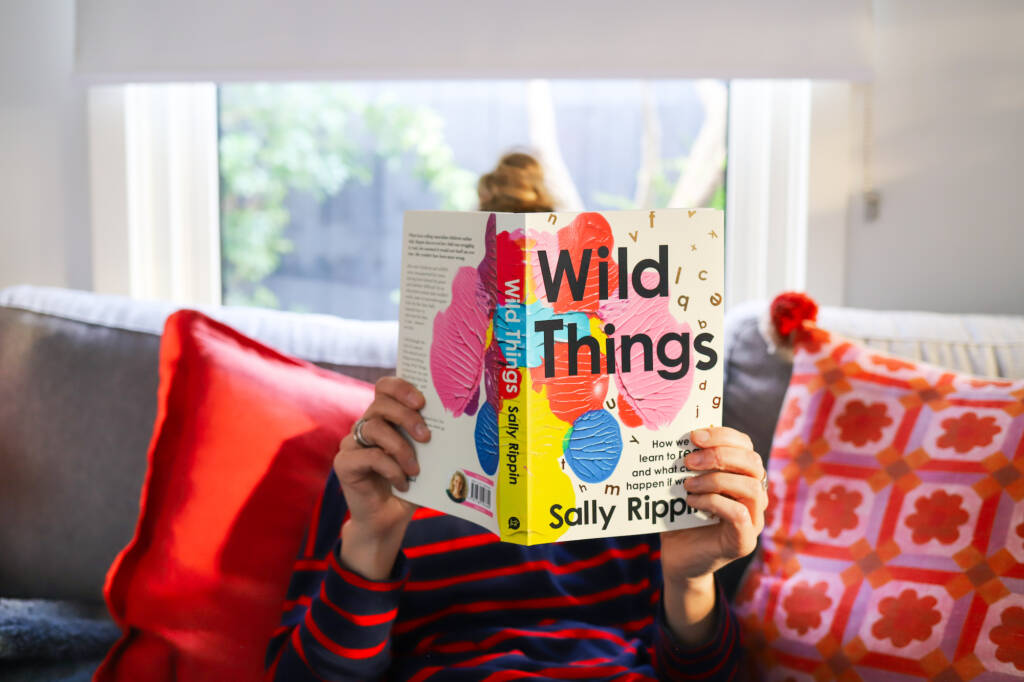 Hi Sally, how are you?

Hello! So nice to hear from you. I’m such a fan of Ramona magazine.

Well if that’s not the sweetest thing! Thank you! Tell me, where in the world are you and what can you see outside your window right now?

That is a very good question, because I do move around a lot! We moved regularly as kids because of my dad’s job as a civil engineer, so I don’t think I know how to stay in one place more than a few years. At the moment I am writing this from my house in Castlemaine, in Central Victoria. My studio looks out over gum trees and there are all kinds of beautiful birds in my garden. I divide my time between here and my partner’s place in Brunswick – which is right in the middle of inner-city Melbourne, so I get the best of both worlds, really.

I just finished your fantastic new book Wild Things, congratulations! How was the transition from children’s author into non-fiction author?

Thank you! That means a lot to hear you enjoyed it. Almost every time I sit down to write something new, I am overcome with self-doubt, so in some ways this was no different. Though I probably wasted even more time than usual doubting myself while writing and researching this book, because it’s so different to anything I’ve published before. In fact, it wasn’t until my publisher and agent both read an early draft and loved it, that I was able to be convinced to even sign the contract. It also changed quite a bit over the period of writing it, from something quite instructional to something much more personal, and branched out from just being a book about dyslexia and reading, to one that explores all forms of neurodivergency. I’m really happy with how it turned out though – and even more so now that I’ve started getting such positive feedback from so many readers. And so quickly! It’s only been out a few weeks and I’ve already received messages almost daily from complete strangers telling me the impact the book has had on them as well as sharing their own heartfelt stories.

I was so invested in Sam’s story and I have to know, how is he going now?

Sam is doing really well. He is currently studying a six-month pre-apprenticeship course in the city three days a week and comes to stay with me in the country over the weekends. He is a beautiful young man – full of deep empathy, kindness, and a pretty kooky sense of humour.

What inspired you to write this book apart from Sam?

It was a conversation I had with an educational advocate and literacy specialist, while looking for a tutor for Sam. I had assumed that being born dyslexic would mean he would never be able to read well, but she told me otherwise. She explained how our brains are changed through the act of learning to read and that almost everyone can learn to read fluently, provided they are given effective reading instruction (which Sam was not.) This made me feel so sad for Sam, but also determined that this shouldn’t happen for other kids who were struggling with reading. So, I decided if I wrote a book about everything I’d learned the hard way, it would help ensure other kids wouldn’t be left to fall through the cracks like Sam had.

As someone who hasn’t experienced learning difficulties myself, this book was a huge eye opener and made me really angry at the way kids can get lost in the school system, are things changing/are you hopeful for change?

I’m very hopeful, especially since researching this book and speaking to so many amazing parents, teachers, and literacy specialists, who are all creating awareness and pushing for change, here and around the world. Our current education system was created over a hundred years ago and has evolved very little, despite the fact that it doesn’t suit so many of our children. Even many teachers admit they struggle to know how best to support unconventional kids who aren’t thriving in mainstream education, especially when so many of them require one-on-one support. However, the more we talk about neurodiversity and the best ways to teach reading, the more I believe things will change for the better. Already, more and more schools are offering alternatives to mainstream education and local and state governments are starting to mandate programs to identify struggling kids so they can get vital intervention early on.

I was so interested to read that you also didn’t finish year 12 and still made an amazing career for yourself, why were you so set on Sam finishing school when you were a perfect example of school not being everything?

It’s true I have an amazing career and I’m lucky to be able to make a good living from it, especially in Australia where it can be hard to support yourself in the Arts. But while I didn’t pass enough subjects to get my higher school certificate, I got top marks in English and Art, which not only highlighted what I was good at, it also gave me the confidence to pursue a career in this direction. Also, I had done well in school up until that point and was liked – and regularly praised – by my teachers. This made me feel good about myself and feel confident about my capacity to get by in life, despite my dismal end of school marks.

Sam, sadly, had the opposite experience to me. He had only known failure for most of his years at school – at least until he was belatedly diagnosed with ADHD at the beginning of Year Ten. Then, almost as soon as he began taking medication, he went from being at grade four level in Maths, to getting one hundred percent in a Statistics test. It’s impossible to describe how huge this was for a kid who had never felt success in anything. Thanks to this, he realised he is actually good at Maths – he had just lacked the proper supports to tap into his potential – and so decided he wanted to do his higher school certificate and go on to study Maths at university. But by then he had fallen so far behind in everything, it was going to take him years to catch up to his peers. Also, to pass Year Twelve in Victoria, he needed to pass English, which requires so much reading and writing, and can be very challenging for dyslexics.

So, the biggest difference between my experience and Sam’s, is that I didn’t pass Year Twelve because of a whole lot of stuff that was going on in my life at the time, but I still had plenty of options for further work or study available to me from having found education accessible from my first day at school. This was not the case for Sam, nor many other neurodivergent students who struggle in school. Their choices can be extremely limited and unless they can get proper support from early on, their self-esteem and mental health can also be badly affected.

How do you think the long lockdowns in Melbourne affected those with learning difficulties and can we support them to catch up?

Interestingly, I am aware that some neurodivergent kids thrived in lockdown. Particularly those who struggle with social stuff, or the noise and chaos of the classroom. I don’t really feel confident to speak on behalf of other families, as I imagine the experience was different for everyone, but while Sam wasn’t able to keep up with his schoolwork, our relationship became much stronger during lockdown. It was just me and him a lot of the time and we spent lots of time talking together. Sometimes just superficial stuff about things we’d seen on the TV or the internet, but other times Sam would open up to me about how hard school had been for him. During the first lockdown, I enrolled in an online counselling course to try and be a better support for Sam and I gradually learned to do less talking and more listening. I realised Sam had so much to teach me, and I began to learn who he really is, not who I thought he was or should be. So, this concentrated time together during lockdown, and an extraordinarily challenging period of Sam’s life, actually ended up being a gift.

Even though I did complete year 12, it wasn’t without struggle and my theory marks were pretty low (though I got high marks for all my practical work), do you think there needs to be a different approach to VCE? Or could there be different streams for different kinds of learners?

In Victoria, we already have some pretty good options for students wanting to study practical skills through our VCAL program (Victorian Certificate of Applied Learning), as well as some great apprenticeships and alternative career pathways. It’s much harder for kids who want to study theoretical subjects, like Maths and Physics, which are usually only offered at universities. Kids can apply for these subjects as mature-aged students once they turn 21, which is what Sam plans to do. However, I would say the biggest challenge is getting neurodivergent kids through school with their self-esteem intact. Once they have left school, neurodivergent people often have highly sought-after skills due to the unique way their brains work.

Now that you’ve written this amazing non-fiction book, can we expect more from you in this space?

And finally, what advice do you have for those of us who lie awake in worry about our children?

To answer this, I will share something I scribbled to myself in a notebook, while lying awake worrying about Sam:

Trust your child. They will show themselves to you. Be ready to love who you see. 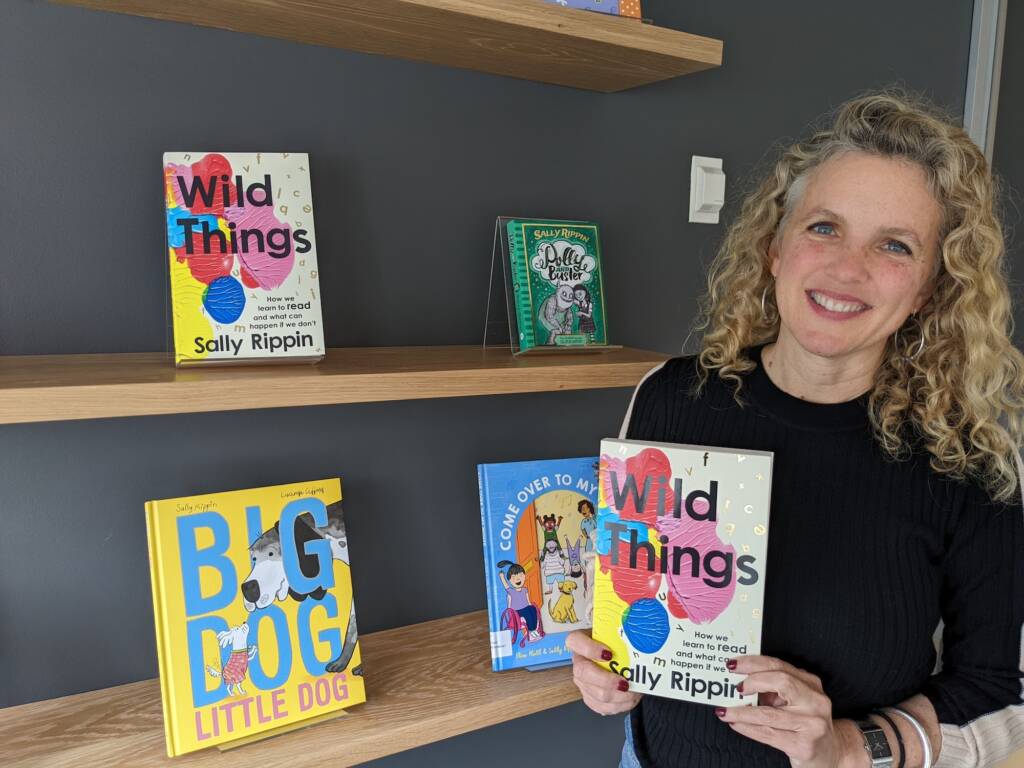 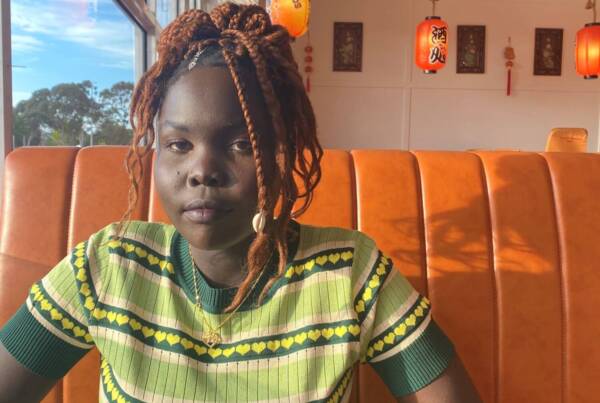