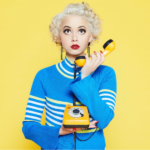 Writing by Molly McKew // 22 year-old Sahara Beck released her first album when she was 15 and has been producing music ever since. Beck has toured with two of Australia’s finest vocalists and songwriters, Katie Noonan and Paul Kelly, and has just released her new single Here We Go Again. Described as “art-pop”, Sahara’s sound is poppy and bold, with v. epic and catchy choruses. We were excited to talk to this amazing lady about the albums that make her tick.