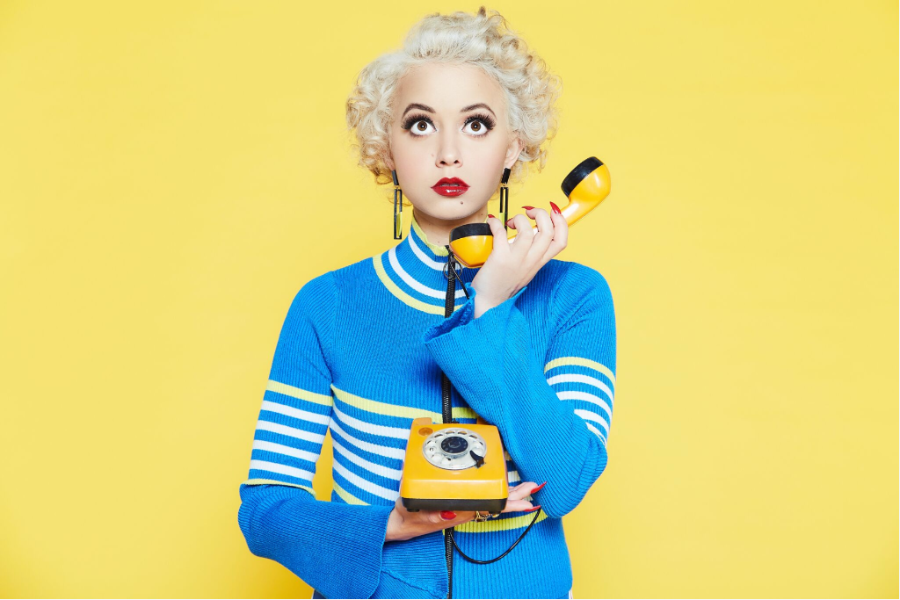 My first thought when I saw Sahara Beck for the first time was how incredible her hair is. But of course, there is far more to the artist than a boss personal style. The 22 year-old released her first album when she was 15, and has been producing music ever since. She has toured with two of Australia’s finest vocalists and songwriters, Katie Noonan and Paul Kelly, and has just released her new single Here We Go Again, which she is taking on a headline tour around Australia this November. Described as “art-pop”, Sahara’s sound is poppy, bold, and features v. epic and catchy choruses. She is known for her theatrical and dynamic performances, which she has translated into a very watchable video for her new single, directed by Creative Clones. Ramona was excited to talk to this lady about the albums that make her tick – and were pleased to see that she picked some of our favourites (haven’t we all crumped badly to Monkey Business?).

SAD – This album came out in 2004, I started listening when I was about 12. Feist is so good at speaking about her emotions through music in a way that makes you remember to feel things you didn’t realise you should feel. I have always especially loved the title track “Let it die”. At the time nothing had ever made me feel so deeply sad in such a beautiful way. Now I listen to it every time I go through a break up or I miss a friend that I probably won’t get to see again, when I get rejected in anyway, when I need to let go of the idea of something or someone or even if I’m just feeling like a good cry for no reason, this song is my medicine for that. The lyrics in this song have always given me goose bumps without fail, every single listen. My favourite lyric in Let it Die is “The tragedy starts from the very first spark, losing your mind for the sake of your heart”. What a line! I mean who am I kidding all the lyrics in this song are beautiful but that one always stands out to me.

SEXY –  Let’s be real here for a second, is there anything Anderson does that isn’t sexy? I only became aware of him this year and I’d be lying if I said I haven’t had him on repeat everyday since that moment. I listened to this record all through Winter with my housemate, I think we may have driven ourselves to mild obsession? This album is just a little daily reminder to feel as sexy as you should.

COMFORT-  This whole record reminds me of when I was a teenager, starting to crush on people, starting to feel all those vulnerable and insecure teenage feelings. I listen to it now just because it makes me feel comfortable and at home. Robert Plants voice was the first voice that ever made me swoon! My best friend and I used to lay on our beds side by side with this record playing while we would constantly interrupt with “Oh my god this next part though!”,”Isn’t he so sexy!”, “Let’s replay that part!”. Robert Plant showed me how powerful vocal sexuality is. He still drives me wild when I listen to that record. I remember once when I was about 14 I was listening to Jimmy Page and Robert Plant doing their little back and forth call and response in You Shook Me with my head phones in while I was putting on my make up in the bathroom and I must have been singing along – by the way singing along to the call and response in You Shook Me is basically just very sexual and loud “aaaaahs” – when I came out of the bathroom my mum and brother very awkwardly tried to remind me that if I was having “alone time” I should remember they were still in the house.

COOL – I used to put on monkey business when I was a kid and dance around in my room whilst rapping all of the parts, I had a friend who I would go and meet up with and we would make up dances to most of the tracks on this record. This record made me feel cool. I had felt confidence before but never coolness like this. I don’t know why it was this that did it for me but I just looked up to them so much, I wanted to be like them. I love the samples used throughout this record and all the features and instrumentation. I love the track “Like that” on this record. It features John Legend, Q-Tip, Talib Kweli and CeeLo Green, I listen to it almost daily recently, I’m completely obsessed with it and can’t seem to shake it (not that I would want to).

POWER – My housemate showed me this record when I was describing to her the kind of power I was egotistically feeling from my own new track before I had released it and she told me there was already a power queen and her stage name is St. Vincent. Every time I listen to this record I feel her power and I feel like I can do anything I want in which ever way I see fit. I look up to this record a lot as well as her career. She has really carved out her own place in this music world and shown women everywhere to do what they want without feeling intimidated.