Review by Ruth Richards // Celebratory, powerful, and utterly mesmerizing, The Fits is surely one of the best first features to come from a first time director 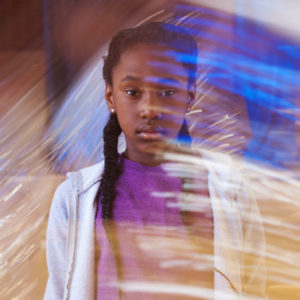 There is a scene in Anna Rose Holmer’s The Fits where eleven-year-old Toni stops during workout and stands in the middle of a highway overpass. She starts to air box, the way she has been trained by her brother, before fluidly and seamlessly transitioning into dance.  Her movements are wild and bold as she merges boxing with her newly discovered love of dance, and the sense of joy is so great it almost bursts from the screen. The sequence marks a pivotal moment of change in the film, as Toni begins to understand she can dance as well box, and realises it may be possible for her to embrace something that her “tomboy” status previously excluded her from. It’s one of many powerful and striking moments in the film.

Holmer’s directorial debut is an accomplished, expressive tale of burgeoning adolescence, and was developed as part of the Venice Biennale Cinema College program, which helps first-time directors from around the world produce their films on a micro-budget (and it premiered at the Venice Film Festival in 2015). Set in Cincinnati’s West End, The Fits stars newcomer Royalty Hightower as Toni, who trains in the boxing gym with her older brother other boys there (it’s implied since she’s done this since she was very young). However, Toni becomes drawn to the all girl competitive dance group, the Lionesses, who rehearse upstairs. Entranced, she decides to join them when they hold tryouts. At first out of time and awkward, she soon starts to feel more relaxed and comfortable. At the same time, however, a mysterious and unexplainable case of “fits” and convulsions seem to be spreading through the members of the troupe (who range in age from their late teens to possibly as young as nine). As fear spreads and everyone speculates as to the cause, Toni struggles to reconcile her new sense of femininity, the comfort and sense of safety boxing offers, and the anxiety the fits are causing.

There’s something almost sci-fi about the spread of the fits—the more officials try to pin down the cause, the more futile it seems, and the more the phenomena spreads. The boys are safe, and only the girls are affected. What starts as an isolated, yet horrifying incident, soon haunts Toni beyond the practices of the troupe, as local news outlets cover the story, and her new friends constantly ponder as to the source. Some even wonder what it would feel like, and imagine it happening to them. Toni, scared and confused, pushes her friends away, runs back to her brother, and attempts to avoid and block any mentions of the fits. What “the fits” are, and what they’re being caused by, is left in many ways for us to decide.

New-comer Royalty Hightower captivating as Toni (casting her must have been a dream). Our introduction to Toni comes from the sound of her whispered, labored counting: “eleven … twelve … thirteen …” as she performs sit-ups. She is often framed in close-up, and the camera is often left to track her, rarely cutting, giving us a highly subjective point of view. The first-time actor perfectly embodies the paradoxical feelings of turmoil, vulnerability, excitement, and energy that come with being on the edge of change. It is no coincidence that Toni and her young friends Beezy (Alexis Neblett) and Maia (Lauren Gibson) at an age when they are just entering puberty, but it is never as simple as “just puberty.” Together they pierce their ears, paint their nails, and get excited about the glittery, sparkly costumes they are to wear for their upcoming dance competition. They run and laugh and dance. It’s a familiar representation of girlhood in many ways, and Toni sits at a crossroads that many will recognise—a place between “tomboy” and “feminine”; boxing and dance. Her femininity is even called into question in the subtlest of ways–she is noted by the other girls for her muscularity, and when being measured for competition costumes, an older girl tells her outright that she’s “straight as a board.”

The incidents of the fits grow more frequent and intense throughout the narrative, leading to a stunning, even surreal finale–but these strange occurrences only serve as a mask for what the film’s exploration of a young girl’s oncoming adolescence. Toni’s search for acceptance within the Lionesses, her fascination with them, is her search for a place within a community of strong, powerful women. It should not be taken for granted that Toni is a young black girl, and that the film centers on a community of young, black girls, rarely portrayed in film as they are here. These girls are strong, passionate, talented, and revel in the freedom that dance provides. Their bodies as they dance are celebrated and never fetishized.

Part of that celebration is in the way the camera captures the movement and the dance. Before directing her first feature, Holmer got her start in the camera departments on such films as Tiny Furniture (Lena Dunham; 2010), and produced the documentary Ballet 422 (Jody Lee Lipes; 2014) which followed an emerging choreographer at the New York City Ballet; Hightower and the girls in the dance troupe were discovered by Holmer in a YouTube video, and a movement coordinator, Celia Rowlson-Hall, was also hired to supervisor and help choreograph. Holmer clearly understands the importance of movement, and the physicality and flow is expressed in such a way as to evoke an almost physical reaction in the audience as well.

The film is ultimately left open to multiple interpretations and readings—there’s something almost otherworldly about it, which may leave some unsatisfied. Ultimately however, the film presents itself this way: as open, yet reserved—it doesn’t owe you an explanation. Celebratory, powerful, and utterly mesmerizing, The Fits is surely one of the best first features to come from a first time director, and one of the best of 2015/2016. Simultaneously a celebration of dance, movement, and dynamic young women and girls, this film is a must see.

You can still catch The Fits playing at Metograph in NYC until July 7th, at ACMI in Melbourne until July 10th, and various other locations throughout the US and Australia this summer. Check the full list of remaining screenings here.