Writing by Sinead Simpkins // Photograph by Jasmine Rubio // Representation of women in the music industry does not only refer to the artists that we listen to. According to The Guardian, 30% of executive roles in the music industry are currently held by women. The industry is still heavily influenced by men both onscreen and behind the scenes. 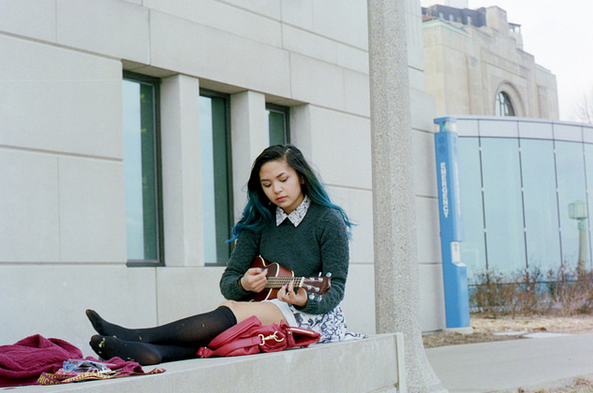 While there is great women talent such as Beyonce, Iggy Azalea, Kate Miller-Heidke, and Ariana Grande, there is not much diversity and minority groups do not have a strong idol presence in the industry. There are more white women than women of colour, and more women that are cisgender than non binary or transgender that are given prominence by radio stations, music outlets, and venues. . While YouTubers such as Ash Hardell try and feature queer artists in their videos or try and designate playlists to certain diversity factors such as gender, sexuality or race in music playlists on the radio or on TV, it is up to the individual to advocate for more diversity. To vote up women and gender diverse artists from a range of backgrounds when it comes to voting in the ‘Hottest 100’ on Triple J, or recommend them to your local radio station. To see your music idols be visible in mainstream, support them. Relentlessly recommend your radio station with new music from these fabulous women and gender diverse artists.

Evidently, the music industry has a lot to fix. Stations such as FBI and Koori Radio have been providing diversity in music for a long period of time. Triple J has helped by providing a space for these new and upcoming artists called ‘unearthed’.  ‘Unearthed’ offers a platform through which independent artists can share their music, with the artists featured coming from diverse backgrounds.

While this is a start, however, Triple J has itself courted controversy as a result of its Hottest 100 day. Firstly, the Hottest 100 has received criticism for its lack of gender diversity. In 2017, there were 34 songs from acts with at least one women, 14 female identifying solo artists, 12 female guest vocals, 7 bands with at least one female identifying member, and just one all-female band. That year, in the top ten, females have been featured in seven of those songs. Secondly, Triple J has refused to change the day of Hottest 100, which has historically taken place on January 26. While for some this is celebrated as “Australia Day”, for many it is known as Invasion Day, and is a day to remember and recognise the start of the genocide of the Aboriginal people. In refusing to change the date of the Hottest 100, Triple J has sent the message that it does not consider the struggle of Aboriginal people as important as their playlist.

While music platforms will play more diverse artists on commemorative days, such as International Women’s Day, they need to do more. It is a start to feature this music on certain days, but it should be played consistently, every other day of the year. There is a lack support for those artists in the LGBTIQA+ community where there is a lack of a platform to bring their music to the table or people of colour who are equally as talented as those who are white. Women, gender diverse, and minority groups need role models, and without the representation of the wider community, the music industry will continue to represent a small group of people, and their voices and interests.