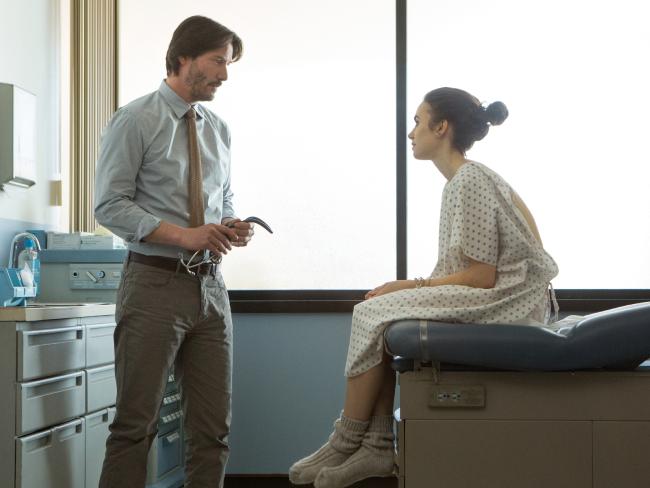 Trigger Warning: The following review alludes to distressing imagery and scenes in To the Bone, a film that explores eating disorders, self harm, and suicidality.

Veteran Hollywood writer and producer Marti Noxon had long wanted to create a film that reflected her teenage struggle with anorexia. Best known for her work on Buffy the Vampire Slayer, Private Practice, and Grey’s Anatomy, Noxon recently made her directorial debut with To The Bone. Dark but witty, the film centers on Ellen, a twenty-year-old artist with anorexia played by Lily Collins. Having had anorexia as a teenager, Collins has, like Noxon, expressed hope that the film generates conversation about the eating disorder, which is the mental illness with the highest likelihood of resulting in death.

The film opens at a residential treatment facility. As a fellow inpatient expresses her angst with media imagery of decadent foods and underweight women, Ellen mocks her by sneering: “Society’s to blame.” She further taunts her with a sign she’s made that says “Suck my skinny balls.” Ellen is promptly kicked out of the program thereby winning a bet between her and another patient about which one of them would be kicked out first. She earns herself a pack of Marlboros. We later learn that Ellen has been to a number of inpatient programs but all have been unsuccessful.

Much of the film explores the impact of Ellen’s illness on those around her. Ellen’s mom, Judy (Lili Taylor), cannot cope with her daughter’s illness and sends her to live with her father and stepmother. Her sister, Kelly (Liana Liberato), feels like the illness is robbing her of her own experiences. Ellen’s father is absent for the duration of the film. His voice can be heard in a single scene when Ellen listens in on an argument between him and her stepmother, Susan, about the cost of residential treatment programs. A quirky redhead with a Southern accent, Susan (Carrie Preston) pushes Ellen to accept treatment by an unorthodox specialist, Dr. William Beckham (Keanu Reeves). When Ellen arrives at Dr. Beckham’s treatment center she meets an eccentric British ballet dancer named Luke (Alex Sharp). Initially wary of Luke, Ellen warms to him and the two become romantically intertwined. In part, Ellen’s feelings for him give her the strength at the end of the film to fully confront her illness.

It must be said that To the Bone is not a great film. Some eating disorder survivors say that the film does not go far enough in alerting viewers to its content. (A brief prefatory statement appears before the film’s formal opening.) An opinion piece in the Guardian titled “To the Bone Confirms There Are (Almost) No Good Movies About Anorexia” declares it to be “shallow, sexist, and sick.” Certainly, one reading of the film is that two men serve as the impetus for Ellen to begin her journey to recovery: Dr. Beckham, a stand-in for the absent paternal figure, and Luke, her romantic crush who gives her a reason to live. As Hadley Freeman states in her Guardian piece: “the idea that all that these hysterical female anorexia patients need is a couple of calm men to save them from themselves is, to put it mildly, grating.” Perhaps the most vociferous criticism is about Ellen’s appearance: she looks like a “waifish, glamorized starlet in full eye makeup.”

This assertion, however, raises the question of audience. For those who struggle with eating disorders, Ellen’s emaciated figure may serve as thinspo (or pro-anorexia inspiration). But this film really isn’t targeting that demographic. It seems intended instead for those who, like Kelly, don’t really understand why Ellen just won’t eat. Those viewers won’t see anything glamorous in Ellen’s figure. With her protruding collarbones and ribs, dark circles under her eyes, and lanugo sprouting from her arms, she looks distinctly unwell. While the film’s depiction of anorexic behaviours such as calorie counting, over-exercising, and laxative abuse may be triggering for some, they’re also, in their painfully realistic depiction, enlightening for others. One is hard pressed to think of a way to make a film about anorexia without it being potentially triggering. But the alternative is to have no films made about the mental illness, which would keep anorexia obscured and stigmatized.

Criticism of the film, much of which is valid, nevertheless obscures some of the positive contributions it makes to understanding the disease. Anorexia is often mistaken as a women’s issue, although it can affect men too. To see this depicted is refreshing. The film’s emphasis on familial dynamics, or the ways in which various members of a family struggle with anorexia, can at times be quite moving. As Ellen articulates it: “I’m sorry that I’m not a person anymore. I’m a problem.” Her sister, Kelly, experiences every significant event in her own life in terms of various stages in Ellen’s disease: “I look at pictures of my prom and stuff, and all I think of is ‘Oh, that’s when Ellen was in the hospital’ or ‘Oh, that’s when you fainted on the bus.’” Her mother has long given up on Ellen. Her father is an absent presence. Susan, who is not Ellen’s biological parent, nevertheless becomes the one other adult, besides Dr. Beckham, on whom Ellen can rely.

Finally, To the Bone refuses to provide the viewer with a reason for Ellen’s illness. Is it because her parents split up? Is it because her father is absent? Is it because she has been sexually molested? The film alludes to each of these but does not conclusively link Ellen’s anorexia to any one of them. By placing the viewer in the position occupied by Ellen’s family members, and left to speculate on the possible reasons for her disease. The film ultimately leads one to understand that there is no single cause, no easy answers to why Ellen just won’t eat.

To the Bone is far from perfect. Nevertheless, the film encourages conversation about the disease and compassion for those struggling with it.