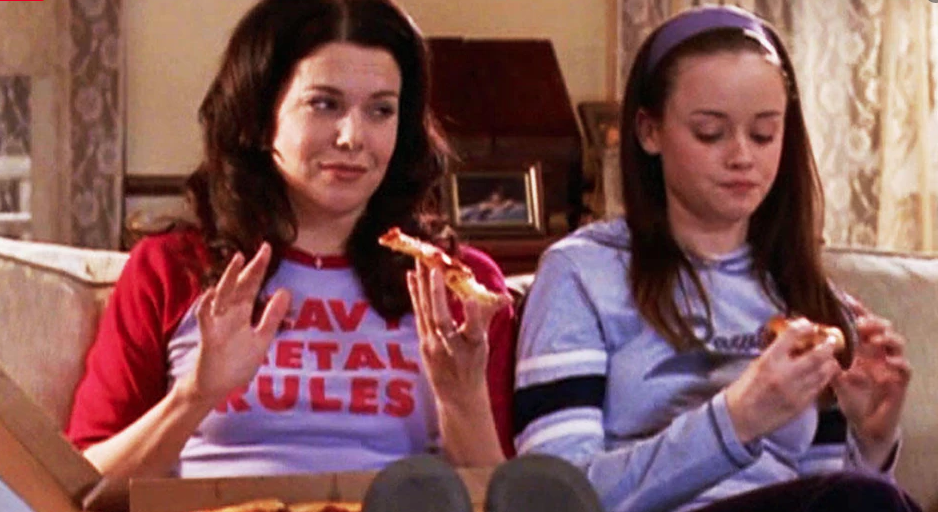 I once wrote a letter to Amy Sherman-Palladino convincing her to give me full rights to write an archival book on all the references ever made on Gilmore Girls. The letter was printed and forgotten. Well, sort of. I found my toddler waving it around as if it was a toy airplane. It wasn’t long after my Macbook Air had a stroke. The letter was gone forever, but the words never left me.

I wrote to Amy a brief history of my childhood

With a brother five years older than me, I genuinely felt like an only child. Rory Gilmore was an only child. I was always heading to the book store to read while my mom was at one of her three jobs. In addition, there was a huge culture gap. Being hearing impaired had me learning American Sign Language as a primary language. My parents, immigrants from Iran, barely knew a word of English. This also contributed to the gap between my mother and myself. Thus giving me the desire to have a mom like Lorelai Gilmore.

I then shared my love for Gilmore Girls

The early 2000s, my mom was working her ass off trying to keep a roof over our heads. My dad had “gone away” for a little while to dig a hole — catch my drift? And my brother was always off doing his own thing, as if he were an emancipated teenager. Nearly everyday, I’d find some way to get a ride home and sit my ass down to watch whatever was on TV. Cue the lights, raise the curtains, ladies and gentlemen, Gilmore Girls.

At the time, we had an antique television set. It was so old, you had to slam the top to get it to work like they do in the movies. It really did do the trick. However, the TV was made before Closed Captioning on all television devices was required by law, so every thing I ever watched before I was seventeen was completely mysterious. I relied on movement and images to understand the plot. Sometimes, I had no idea what was going on.

Lorelai, in my eyes, was the cool mom. She was also youthful, beautiful, and powerful as hell. She raised her daughter, Rory, on her own, perhaps, from a young age (again, had to figure it out with what I was observing). And her daughter was cool as shit. Rory was smart, a bookworm, and cute. I wanted to be Rory and I wanted Lorelai to be my mom.

The connection I had with Gilmore Girls stuck with me. We canceled our cable TV service and joined the wonderful world of streaming media. Gilmore Girls was on Netflix and to my luck, it was one of the very few shows at the time that provided Closed Captioning (it took Netflix a little while to catch up). I pressed play on the Pilot episode.

At this time, I had just quit my job of 5 years in the wireless communications industry to go back to school. This was a big step. Massive. I was making bank with incomparable benefits and here I was, dropping it all, only to potentially be reminded how awful I am at academics due to my disability. Some people work and go to school, but I needed the full time, plus extra time, plus extra-extra time. Office hours, I was there. Math Lab, I was there, Study group, count me in. Tutor, please help me.

Slowly, but surely, I was being educated. I learned more in my two years of community college than I had ever learned in my K-12 education (but maybe that’s an exaggeration). Watching Gilmore Girls for the first time with captions, not only helped me see what the show was really about, but also brought me joy now that I understood some of the references.

Another five years went by

Shortly after I finished school with extensive knowledge in English, I got pregnant and was sick 95% of the time. My pregnancy consisted of a couch potato lifestyle, watching all the films ever made. For the first time*, I watched classics such as as all six Star Wars films, The Godfather films, The Lord of the Rings trilogy, The Matrix trilogy, Indiana Jones series, the first 3 Die Hard films, Blade Runner (OG and 2049) and other films that didn’t go the multiple route like, The Sixth Sense, Fight Club, Pretty Woman, and a hell of a lot more.

At 7 months pregnant, I met up with a friend who was still working on getting her PhD in the same English department I graduated from. “Do you miss Cal?” she asked. I had a beautiful answer for her.

The Devil’s Advocate was one of the many films I watched and the antagonist, played by Al Pacino, was named —

If you are an English major or a bookworm, you would know why I lost my mind when I watched the film. Like a walrus, I rolled over and turned to my husband in all excitement, making whatever terrible sound a walrus makes. He returned no favor. My husband’s reading choice consist of articles on how to improve work skills and the Mac Rumor’s forums. He’d probably believe Paradise Lost is a Disneyland attraction.

I told my friend, I didn’t miss school as a whole, but I missed being around people who had a passion for the same stuff. I told her about The Devil’s Advocate and she had the same ridiculous reaction when I mentioned one of the most famous name of all of English literature.

What’s amazing about pop culture references, especially in this age of engagement, is how being familiar with something mentioned in one place or another, brings people together. I’m not saying that if you don’t know who Glen Coco is, you can’t sit with us. References are there for us to learn from and refer to. I will literally open YouTube just to share with you how something so minor (and uncredited) created a cult following. What would this invaluable information offer? Connection. Gilmore Girls gave me the opportunity to learn about far more things I never even knew about and for that, I was able to connect with one of the best television shows ever produced.

I wanted to write a book, in the order of each episode, mentioning every single reference made on Gilmore Girls so that anyone watching, can simply press pause, turn the pages to Episode X and viola, that was a reference made to Carrie, or Macbeth, or even Richard Simmons.

At some point last year, I rewatched all of Gilmore Girls including the revival, and now more than ever, I was able to get most of the references. Seeing how I have progressed over nearly 20 years made me realize how powerful knowledge is. Whether it be The Canterbury Tales or a single photo from the database of our generation’s meme, there is always someone out there that can look at you without saying a word and get it.

Auzeen Mendoza is a creative writer based out of the Bay Area in Northern California. She is a UC Berkeley alum and an ambassador for the Haiti Deaf Academy. On most days you will find her rearranging furniture, badly singing to her toddler and reminding people she can’t hear them.