Writing by Audrey Morrison // But in season five what is redeeming about Claire as a feminist is overshadowed by her utter evilness. Instead of the alpha woman who has captivated us, she is a caricature of a female politician. 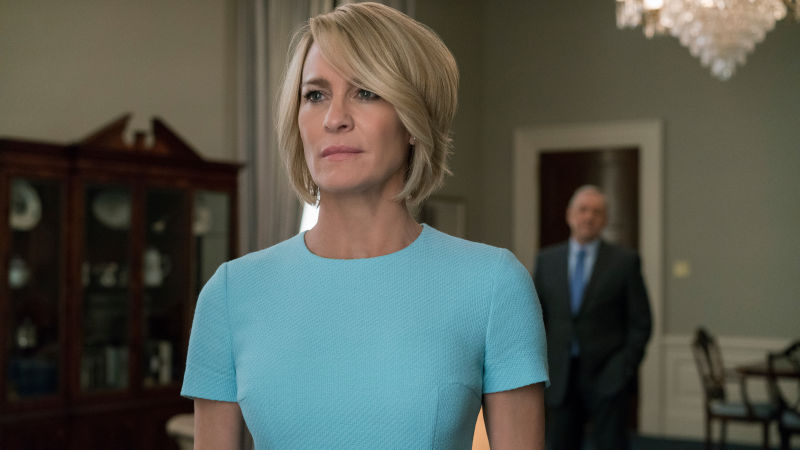 Warning: Spoilers ahead for House of Cards Seasons One Through Five.

When Hillary Clinton lost the 2016 presidential election to Donald Trump, I was stunned and sick to my stomach. Trump was, after all, accused by numerous women of sexual assault. How could Hillary Clinton lose to him of all people?! Shortly afterward, Mother Jones ran the following headline, “Well, At Least Hollywood Puts Women in the Oval Office.” The article enumerates twenty examples of female presidents on the small and big screens. These depictions often, although not always, resort to misogynistic tropes. In Prison Break, Vice President Caroline Reynolds (Patricia Wettig) arranges for the assassination of the President so she can in turn become President. Sally Langston (Kate Burton) in Scandal kills her husband because he’s a political liability.

If female politicians aren’t evil, they are completely incompetent, such as Selina Meyers (Julia Louis-Dreyfus) in Veep. As of 30 May, Mother Jones can add a new name to their list of female presidents on screen: Claire Underwood of House of Cards (HOC). In the season five finale of House of Cards, Claire finally achieves her loftiest aspiration. She becomes President of the United States. I would love to see Claire’s ascent to the presidency as a feminist arc, but she acquires the office through the Underwood’s trademark corruption and unscrupulous means.

In past seasons Claire’s character has been a vehicle for the writers to explore of number of critically important issues for women. Compared to real world of American politics, where, with few exceptions, wives are often well-dressed props trotted out by their husband-politicians for significant events and photo-opps (“Look, he’s a family man!”), Claire is a breath of fresh air. She’s formidable, whip smart, and passionate about politics and social causes. When her husband Frank is a congressman in season one of HOC, she’s not at home baking pies. She’s CEO of the Clean Water Initiative (CWI). In the debut episode of the series, Claire instructs her second in command Evelyn Baxter to fire nearly half of the staff members so a larger percentage of the organization’s funds can be directed to a well drilling project in Africa. After Evelyn has spent the day firing staff members, Claire lets her go as well. Evelyn, who is fifty-nine, is stunned. “No one hires anyone my age,” she stammers. Claire stares at her from across the table, visibly unmoved.

To be sure, she’s ruthless. But that doesn’t make her anti-feminist. Claire admires in other women the attributes she believes herself to posses, such as toughness, ambition, and intelligence. After firing much of her staff at CWI, she recruits a Gillian Cole, the brilliant founder of World Well. Cole turned down offers to work at Google upon graduating Stanford to establish the small start-up organization that drills water wells in remote locations in Africa. Claire sees herself in Gillian and says to her, “I know what it’s like to be capable and beautiful and ambitious….What I see in you is a woman I admire….I want to clear the way for you so you can achieve what you want to achieve. On your own terms.” This moment is decidedly feminist. Not only is Claire a trailblazer, she enables another woman to experience the same success and autonomy.

However, their relationship experiences a falling out when Gillian protests a deal Claire makes with SanCorp, a corporation Gillian perceives to be corrupt. After Claire fires her, Gillian sues the CWI. Claire cuts off Gillian’s health insurance, which she desperately needs because she is pregnant and sick with giardiasis, a disease she contracted while in Africa overseeing well digging projects. But when Gillian drops the lawsuit, Claire resigns and hands over the reins to Gillian. In spite of their adversarial relationship, Claire recognizes Gillian’s potential as a global leader on water issues.

In her marriage, Claire chafes at being told what to do by Frank. They have an unusual marriage. They are not monogamous and, on one occasion, take part in a threesome. Of the two, Claire has the greater number of affairs: first with Adam Galloway and later with the novelist Tom Yates. Despite the polyamorous nature of Frank and Claire’s marriage, their relationship is also characterized by an enduring professional loyalty. After a political fallout affecting the venue for one of Claire’s CWI fundraisers she says to Frank, “I can’t keep having my work take hits on behalf of yours.” She is not content to play second fiddle. Frank understands this and routinely makes concessions to ensure her career is not sidelined by his.

In season two, after Frank has been sworn in as the Vice President, Claire uses her proximity to the White House to influence the first lady to support a bill that aims to reform how sexual assault cases are handled within the military. This decision is prompted by her reflection in a live national TV news interview that she was raped during college. She not only has the courage to admit she was raped, she also names her accuser: General Dalton McGuinness.

Rape is but one of the issues Claire tackles courageously and publicly. Claire has had multiple abortions. She unapologetically tells a political strategist she’s had three. Of course, she realizes if the public knows this she’ll be the target of pro-life outrage. So, she admits to having an abortion during an interview, but lies and says the pregnancy was the result of her rape. When asked point blank if she’d had an abortion, she answers: “If I said yes, my husband’s political career would be in jeopardy. My faith would be questioned. Likely my life would be threatened. But I won’t feel ashamed. Yes, I was pregnant and yes, I had an abortion.” Given the estimation that one in three women has an abortion during her lifetime you’d think abortion would be a more common theme in television and movies, but it remains relatively taboo.

When Frank succeeds Garrett Walker as President, Claire persuades Frank to make her the U.S. Ambassador for the United Nations. Frank misjudges Claire’s willingness to subjugate her ambitions to support Frank, and in the season three Claire leaves Frank. She doesn’t have a problem standing on her own two feet. Ultimately, he realizes that he needs her more than she needs him, and they reconcile.

Yet, another feminist moment occurs in season four of the series. Faced with the a tough presidential race between Frank and Will Conway, the Underwood’s are hounded by their decision to remain childless. The Conway’s are charismatic and the parents of two small adorable children. At one point Hannah Conway inquires if Claire regrets not having any children, to which Claire responds “Do you regret having them?” This moment is the ultimate example for any woman who’s ever been subject to prying questions about her decision not to have children. But in season five what is redeeming about Claire as a feminist is overshadowed by her utter evilness. Instead of the alpha woman who has captivated us, she is a caricature of a female politician. Claire murders her lover Tom, who threatens to publish a tell-all book about the power couple. He’s willing to go away for the right amount of money, so his death feels unnecessary. Claire’s murder of him panders to the most misogynistic of imaginations: the black widow. She does not grieve Tom’s death and quickly moves on to a more pressing matter: the presidency. She even entertains a discussion with her closest advisor, Jane Davis, about poisoning Frank so he won’t be a hindrance to her presidency.

To my knowledge, Claire is the first female TV president of the Trump era. When he ran against Hillary Clinton, Donald Trump gave new life to the conspiracy theory that his opponent was in part responsible for the death of former Deputy White House Counsel Vince Foster. The Republican candidate Ben Carson even suggested that Hillary’s quest for the presidency may have had its origins in her admiration of Saul Alinsky and Lucifer, “the original radical who gained his own kingdom.” At the end of season five, Claire does indeed come into her own kingdom (as evoked by the painted crown she wears in advertisements). It seems that the shows creators have taken a page from the right wing playbook and reduced her to a one- dimensional, amoral, power hungry Democrat.

Are you a fan of House of Cards? What’s your take on Claire Underwood? Do you think she’s a feminist character?