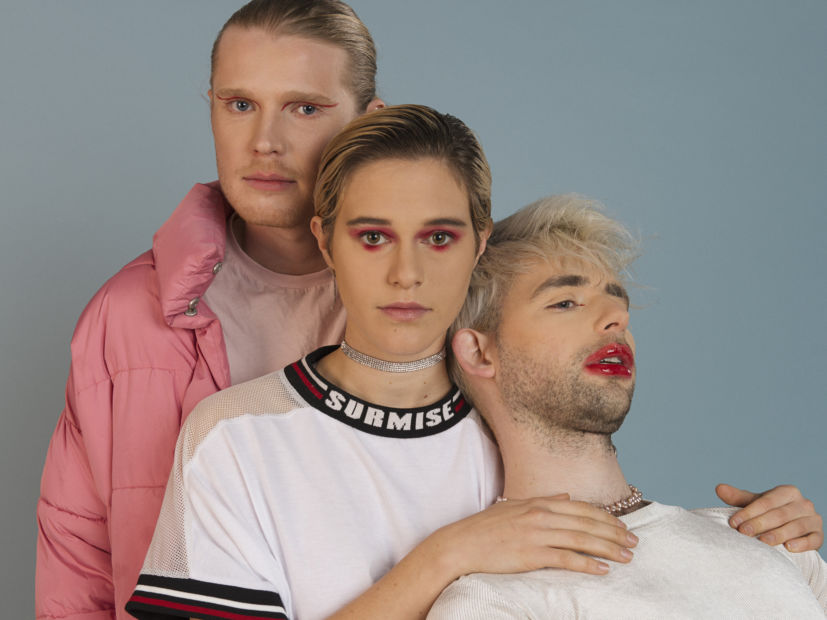 One of my questions for Elspeth Scrine, one third of the electro-rnb-garage-pop trio Huntly, is “what dessert would Huntly be if Huntly were a dessert?” Her response — “Trifle. Multilayered, carefully constructed, some people are bound to hate it, but it’s a dessert with a lot of heart” —  strikes me as too accurate (aside from the hatred). Huntly look very fashion, with a colour palate echoing that of a trifle, and have an honest, empathetic simplicity at their core. Their latest offering, Low Grade Buzz, is layered and diverse, and the lyrics don’t hide from vulnerability and reflection, while party vibes confusingly invite you to dance. Its a life-affirming, all-accepting, party, in line with their band credo ‘doof you can cry to’.

Huntly formed when Elspeth met Andrew McEwen (drummer, producer) travelling in India. Upon their return, they began jamming and roped in Charlie Teitelbaum on vocals and keys. After releasing two EPs, Huntly  have just dropped their debut album, Low Grade Buzz. This dynamic record has received an overwhelmingly positive reception. The record showcases Elspeth’s intimate and soulful vocals, but the tracks don’t rely on vocals for momentum, with an expert layering of beats and sounds drawn from a range of genres. The album, says Elspeth, is a departure from the past in that they wanted to make something more accessible, bringing party vibes for when they play live.

But the album also includes some darker, slower material, and the lyrics go deep, ruminating on power, privilege, relationships, and identity. The track ‘AUR’, for example says Elspeth, “is kind of a reflection on the abuse of power. It draws on my experiences of being a teenager working in a supermarket, with a creepy older dude who was my boss.” She says, “It’s been really cathartic to work through some of this stuff.” By day Elspeth works as a music therapist, so using music as a means of self-transformation and healing is second nature. She outlines the writing process as follows : “1) feel really really sad; 2) try to express those feels as lyrics in my diary; 3) sit at the piano and play chords until I find a vocal melody I like; 4) take the song to Andy and Charlie; 5) we turn it into a banger!”

A quick scour of the web reveals that Huntly are a politically aware trio, passionate about not just music, but issues of equality and representation in the music industry. Elspeth is involved with two collectives who work hard to chip away at the walls of power within the industry for women and GNC people (LISTEN and Cool Room). For Huntly, music and performance is political – Elspeth points to issues with accessibility and diversity within the music industry: ”music is a powerful and transformative medium for change, whether you’re writing it or consuming it. Everyone should be able to participate in that, which means that music should not be a boys’ club; sexual harassment at gigs should not be normalised or tolerated; queer and gender diverse people should be represented in music; and white people have a responsibility to consider how they take up space on lineups and in the industry.”

Huntly are also aware of the privilege they carry as settlers on stolen land, and make sure to do an acknowledgement of country before every gig. It’s not often perceived that the music industry has anything to do with issues of sovereignty or colonialism – but for Elspeth, this is somewhere obvious to start when working towards positive change.

As Elspeth says: “As settlers in Australia, any form of change making has to centre Aboriginal and Torres Strait Islander people. That was a really big and important piece of my own learning over the last few years – that inclusivity in the music industry isn’t separate or distinct from issues of sovereignty and decolonisation.” How does this translate into tangible action? Addressing this history and ongoing colonialism, she says, “could translate to supporting Indigenous artists, events, and labels, and for me as an artist it means ‘paying the rent’ by donating money we make to Aboriginal organisations that are focused on decolonisation and resistance.”

In her performances, Elspeth has an aura of personal strength and conviction, perhaps borne of years of writing and performing, and as a reflection of the positive and supportive musical community she has cultivated. As a champion of making the music industry an inclusive space for women, I ask her what advice she would give women wanting to get into music making.

“Find yourself a community, whether it’s online or in person, and build it” she says. “Find other girls and gender diverse pals and cultivate a sense of support and encouragement with each other, instead of competition.” Finally, take the pressure off yourself and remember that, by making music “you are helping to smash the underrepresentation of women as songwriters (in Australia, 81% of songwriting royalty payments are paid to men!)”

Huntly are becoming well-known for their live shows, and have some epic album release shows lined up for Melbourne and Sydney in May. Elspeth hopes that audiences will get “connection, validation, and expression” out of their gigs.

I first saw Huntly perform almost three years ago, and remember leaving the show feeling sweaty, but also what my psychologist would describe as a feeling of “connectedness” – with myself but also with the community around me. The best and most surprising thing was, I was attending the gig completely alone. Huntly have achieved a wondrous and unlikely fusion of partying, humanity and empathy, and I’m already hanging out for more.