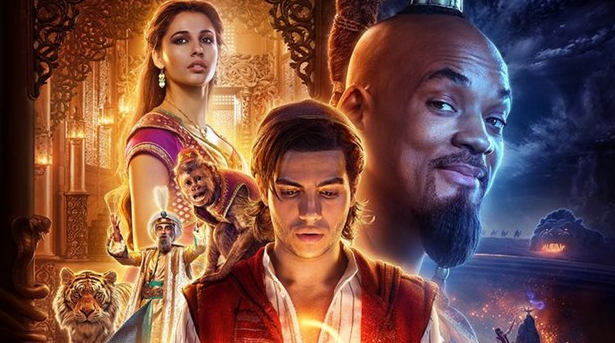 Disney’s live action remake of Aladdin, released in May of this year, was a nostalgic homecoming of a childhood favourite. I personally loved the animated movie when I was a kid, it was definitely one of my favourite and most watched Disney films. I loved rooting for the underdog character of Aladdin, who was cheeky and charming. I felt empathy and admiration for Jasmine, who was trapped and controlled like a princess in a tower, but who also showed courage and strength. I suppose when I was young the film seemed somewhat liberating. Jasmine stood up to and fought against patriarchal laws and customs that would have her marry a stranger and stay trapped forever inside the walls of the castle. Re-examining the film as an adult, I couldn’t say that the 1992 animated film gave an honest representation of women or truly promoted a message of female empowerment. However the live action remake has taken steps to give fairly and purposefully represent women.

If there is even a small nod to feminism and female empowerment in films and TV shows these days, they are quickly accused of jumping on a political bandwagon. Implying that the only reason films would include these blatantly female centric moments is to appeal to and appease social justice worriers. I think it’s interesting that whenever a female character does something vaguely empowering people are quick to cringe and claim that it seems ‘out of place’, when they wouldn’t bat an eye if it had been a male character. Carol Denvors, better known as Captain Marvel, came under much criticism when she first entered the Marvel Cinematic Universe. People hated her for her quick wit and corny hero one-liners, the exact same traits they loved in Doctor Stephen Strange and Tony Stark.

In general I think we are too quick to write off feminism in modern pop culture. We are in a social transitional period right now, and this is reflected in our media. Movies, TV shoes, books, video games, they are all trying to move with the times and tell more diverse and honest stories, and create more diverse and honest characters. However I will agree that sometimes these social messages do feel like an after thought, tacked onto the end of a plot. As an audience we are often easily seduced by a few bad-ass ‘girl power’ moments in films that aren’t truly making an effort to give a progressive representation of women.

Which is why I can appreciate the purposefully message of female empowerment in the live action remake of Aladdin. Princess Jasmine’s character, played by Naomi Scott, is given far more depth than in the Disney classic. She is given a real purpose and drive, a backstory, and a female companion.

In the animated film Jasmine is not allowed to leave the castle, which prompts her escape and adventure into the city, but no real reason is given for this rule other than because she is a ‘princess’, which has always felt like a weak plot device to me. In the new film Jasmine’s mother is introduced, although this character is only spoken about and never introduced, her impact on the film and on Jasmine’s character and drive is immense. Jasmine’s mother, who’s name we never learn, was a great leader who was loved by her people, she passed away some time long before the events of the film, assumedly when Jasmine was young. Her death was shocking and heartbreaking for Jasmine’s father, the sultan, who can’t stand the idea of losing Jasmine too. The inclusion of Jasmine’s mother is reinforcement built into the plot, giving us logical reason for why Jasmine is kept within the confines of the palace. This is obviously still an absurd over reaction, but it helps bridge this gap in the plot.

The mother also gives Jasmine a drive and purpose beyond finding a husband, or the lose original ideal of ‘escaping’ her current life. In the new film Jasmine admires her mothers leadership and the affection she had for the people of the city, she wishes to follow in her footsteps and rule the city as Sultan herself. She expresses how insane it is to allow a foreign prince to rule, when she has spent her whole life preparing for leadership in the place she grew up. The only thing standing in her way is the tradition and expectation that the Sultan should be a man.

Because of her drive to be Sultan and to be like her mother, Jasmine is characterised as being scholarly and intelligent. This Hermione archetype of the scholarly girl has become popular in modern pop culture, it actively fights against the extreme opposite character of a ditsy, or clueless girl. It is used purposefully here, Jasmine values studying and intelligence because she knows that it will help her be a good and wise leader one day.

Jasmine is given a new solo song in the film, ‘Speechless’. The song is an empowering moment with summarises the changes made to Jasmine’s character in this remake perfectly.

A new character is introduced through Jasmine’s best friend and handmaid, Dalia, played by Nasim Pedrad. The inclusion of this character means the film passes the Bechdel test, which attempts to measure the representation of women in fiction. The requirements of a film to pass the Bechdel test are that there are two female characters, with names, that speak to each other about something other than a man. Aladdin passes because Jasmine and Dalia speak about how Jasmine would love to be Sultan, but can’t because she’s a woman. Seems like an easy enough formula to meet right? You might be surprised to learn that less than 60% of all films pass the test. If you think about it, without the inclusion of Dalia, Aladdin would not have passed the Bechdel test. And despite the overwhelming girl power message in Jasmine’s arc, can we truly commend a film on its female representation if it does not meet this simple standard? It should also be noted that Aladdin only JUST passes the test, there is only the one conversation between Jasmine and Dalia when they don’t talk about a man.

Dalia’s character also gives us a positive representation of female friendship in the film. Women in movies are often pitted against each other as rivals, as an adult I just don’t find this realistic. I have so many positive relationships with women, which have shaped me far more than my relationships with men. Yet this is not something we see enough of in films. Dalia’s friendship, and even the memory of Jasmine’s mother, promotes supportive and loving female relationships. The friendship between the women is portrayed as being two sided; even though Dalia is Jasmine’s handmaid it’s clear there is a lot of love between the two of them, and both women help and support the other.

Obviously everyone was so excited to see such a culturally diverse cast for the Aladdin remake, but I was also so happy with the effort made to improve on the representation of women from the Disney classic. Not only were the feminist overtones present, they were purposeful, woven neatly into the story. Even though I loved the animated movie when I was little, it didn’t give the fair and accurate representation of women that I value, particularly for children’s movies. These are the films we begin to learn from, and I feel comfortable knowing that the current generation of children will grow up watching movies that take this into consideration.